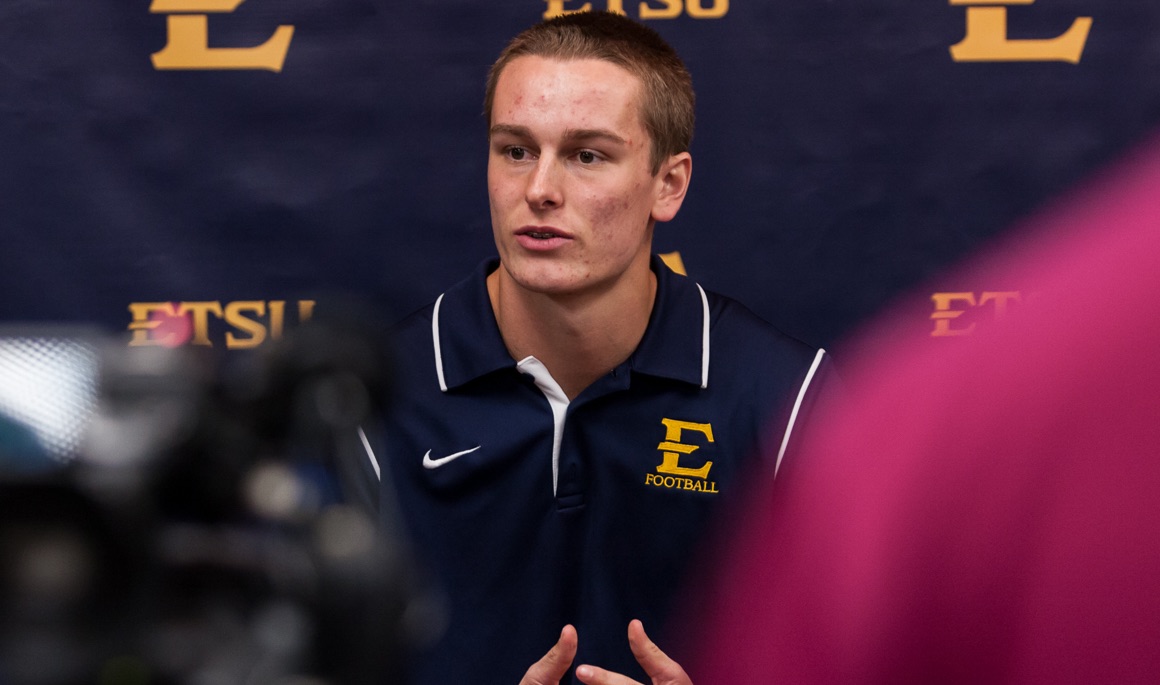 Head coach Carl Torbush and players Austin Gatewood (Ooltewah, Tenn.) and Hunter Wike (Canton, N.C.) met the media at the press luncheon as the Bucs head into game week against Gardner-Webb on Saturday afternoon. Kickoff is set for 1:30 p.m., at Spangler Stadium.

Below are comments by Coach Torbush, Gatewood and Wike.

This was our most frustrating and heartbreaking loss of the season. It was a hard one to swallow as we had too many what ifs. We have to learn to win those close games and there was a lot of disappointment afterwards. It’s easy to win if you have a big lead, but we have to learn to close that one out. We played extremely hard and physical, but we didn’t come up with a couple key plays on both sides of the ball.

We did a lot of good things on offense as we had the ball for over 37 minutes, finished with 19 first downs and 185 yards gained rushing. On the flip side, we hurt ourselves with the nine sacks and going 1-of-19 on third down. We did not have the consistency like we wanted to.

I thought Jajuan (Stinson) and Falon (Lee) both ran well and gave us a competitive run attack. Dalton Ponchillia also played well and is becoming our most consistent receiver.

The defense had its best game of the season. Overall, our defense has made a lot of improvement the last three games and I like the direction where we are heading. We had three takeaways, five sacks and held Robert Morris to 3-of-14 on third down. However, we gave up the one big play in the fourth quarter and can’t let that happen. We need to keep the ball in the ballpark in those situations. Our cornerback was playing up and their fastest receiver got behind us for the big touchdown.

Austin Gatewood played his best game and was very physical. Dylan Weigel had his normal game with double-digit tackles and is our most consistent player.

On special teams, JJ (Jerman) kicked three field goals – one of those should have been a touchdown. We had some mistakes in the punt game early on, but Robert Morris bailed us out with some penalties. I thought we got better with our punt game after those few early miscues, but we still have to do a better job on our kicking game.

I feel like we have made the most improvement in these last three games against Montana State, Warner and Robert Morris. We are looking like a FCS football team, but we still are not where we want to be.

ON THE QUARTERBACK PLAY

Austin Herink played 71-percent of the snaps and Nick Sexton handled the other 29-percent. Both quarterbacks were running for their lives as Robert Morris had nine sacks, and because of the pressure, we didn’t complete a high percentage of our passes.

We are excited to have both of these young men in our program and both have played a role in our success on this team. They are very competitive players and we have to do a better job putting them in successful situations on passing downs.

ON THE PLAY OF OUR LINEBACKERS

The linebackers have been the strength of our team as of late. Dylan (Weigel) has played well and Austin (Gatewood) has shown great explosiveness and athleticism. River (Boruff) and Trey (Quillin) have also played well this season and are continuing to gain experience each week. These guys still have three more years in the program and have potential be special football players.

ON THIS WEEKEND’S GAME AT GARDNER-WEBB

This is our last chance to get a FCS win and that’s important. Gardner-Webb is a good, solid football team. They play in a competitive conference and this will be a big challenge for us.

Gardner-Webb is a well-coached team with a strong defense. They have played three top 25 programs and beat Liberty – who was ranked in the top 15 – earlier in the year. Their defensive line is very big and can cover a lot of ground. Some of their players may be playing in a different league in the future. Just like Robert Morris, they play hard and aggressive. They don’t give up many rushing yards or big plays.

ON FACING A MOBILE QUARTERBACK

Their (Gardner-Webb) offense starts and finishes with their quarterback. He can hurt you in many ways and we can’t let him scramble. He’s their key and makes their offense go.

The defense is going to have to be on its toes. We can’t miss any tackles and don’t want to get him in one-on-one situations, because he will be hard to bring down. Our defensive line and linebackers need to do a good job tackling and making sure he doesn’t scramble.

He’s been their leading receiver and we have to know where he is at all times. He will be the best receiving tight end we have seen all year. They use him in a lot of different sets and he can hurt you on the deep route in you aren’t careful.

ON THE PLAY OF THE LINEBACKERS

We played well on Saturday. Not just the linebackers, but our defense as a whole came out and played well. We have to keep up the momentum and finish the season on a positive note.

Their quarterback is a great athlete and they try to get the ball in his hands as much as possible. We have to make sure we bottle him up and play assignment football. Like Robert Morris, they are very physical up front. We have to show up and be ready to play.

ON THE DEFENSIVE LINE

They have been doing a great job for us. The guys work hard in practice and the scout team offensive line gives them good looks each week. They help create opportunities for us to make big plays.

ON BEING ABLE TO FINISH DRIVES

It’s important that we be more consistent moving the football and getting the ball in the end zone. As a group, we are making too many mistakes and have to correct those miscues. Once we fix those mistakes, the sky is the limit for what we can do on offense.

ON GROWING UP NEAR GARDNER-WEBB

I grew up not too far from Gardner-Webb, so I will have some family and friends coming to watch on Saturday. I also have some friends that go to Gardner-Webb. I am looking forward to playing this game and competing.

ON BEING A ROAN SCHOLAR

Part of the reason I came to ETSU was based on the Roan Scholarship program. It’s a great scholarship and I am blessed to be part of it. This has given me the opportunity to grow as a leader and a student at ETSU. It’s a honor to be a Roan Scholar and be apart of the football team.