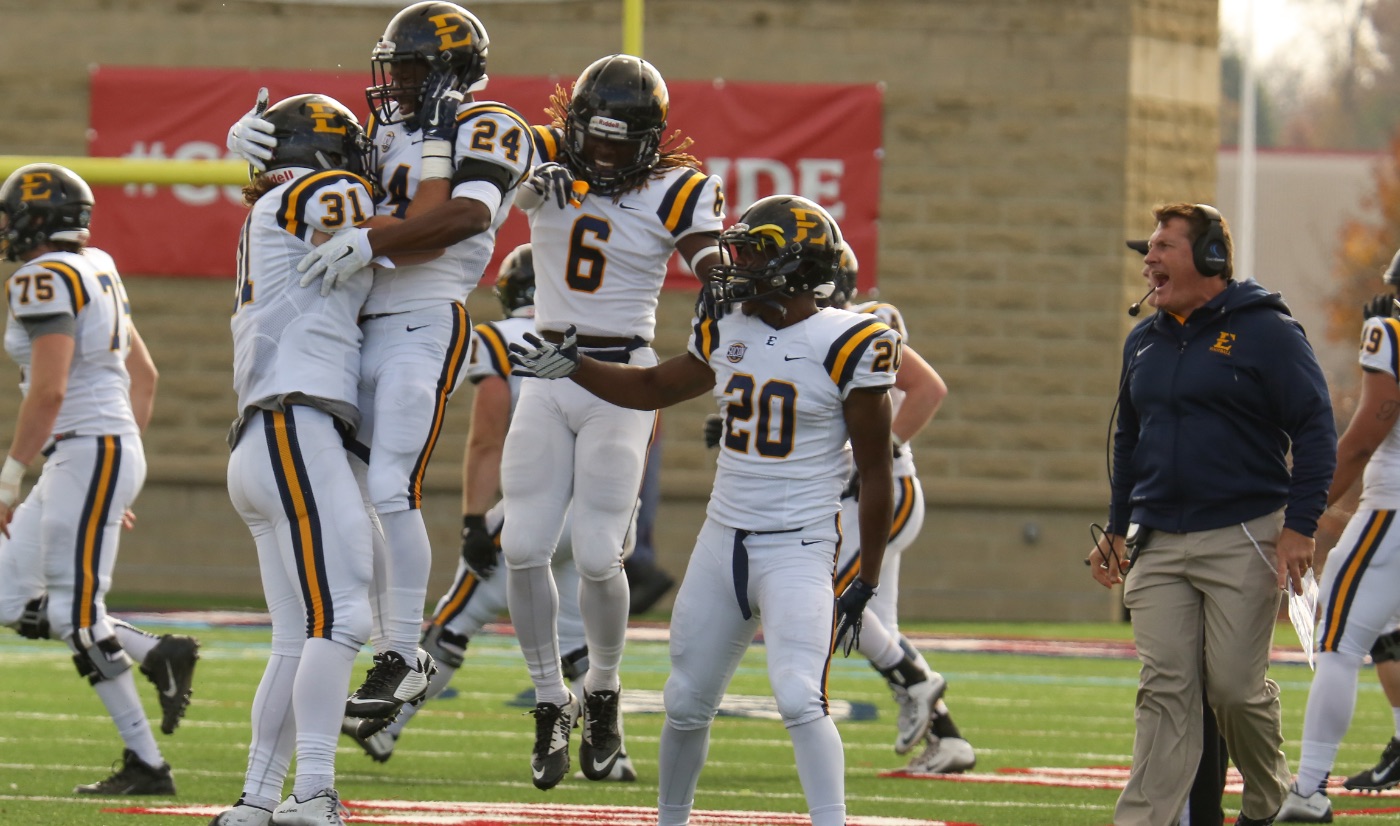 A LOOK BACK AT THE ROBERT MORRIS GAME

Despite holding a two-point lead with less than four minutes to play, ETSU couldn’t hold on for its first road win and victory over an FCS opponent last Saturday at Robert Morris ... Mathew Barr connected with Kyle Buss for a go-ahead 84-yard touchdown pass to put Robert Morris ahead, 14-9, with 3:18 remaining in the game … The Colonials tacked on a touchdown run minutes later to cap off a 21-9 comeback victory over the Buccaneers at Joe Walton Stadium … ETSU, who was plus-3 in the turnover margin and won the time of possession by nearly 15 minutes (37:17-22:43), couldn’t overcome nine sacks and only converted one of its 19 third down conversions … The duo of Falon Lee (Macclenny, Fla.) and Jajuan Stinson (Knoxville, Tenn.) combined for 150 rushing yards, while wide receiver Dalton Ponchillia (Nashville, Tenn.) led the Bucs for the third straight game as he hauled in five catches for 48 yards … Lee posted a season-high 73 yards on the ground and Stinson – who was coming off a 115-yard performance, 2-touchdown in the win over Warner – added 71 yards on 13 carries … Freshman kicker JJ Jerman (Seymour, Tenn.) accounted for all the scoring for the Blue and Gold as he was 3-for-3 in field goal attempts, while Justin Gilliam (Jonesville, Va.) blocked a punt and Kobe Kelley (Knoxville, Tenn.) recovered a fumbled punt by Robert Morris … Defensively, the Buccaneers were led by Austin Gatewood (Ooltewah, Tenn.) as he registered eight tackles (3.5 for loss), 2.5 sacks and forced one fumble … Fellow linebacker Dylan Weigel (Pickerington, Ohio) posted a team-high 11 tackles (nine solo) and had a sack, while Trey Quillin (New Albany, Ohio) added three tackles and 1.5 sacks … Adam Mullins (Elizabethton, Tenn.) and Keanu James (Dacula, Ga.) joined Kelley with a fumble recovery … As a group, ETSU’s defense held Robert Morris to 97 rushing yards, while limiting the Colonials to 3-of-14 on third down conversions.

Gardner-Webb (3-6) is coming off a 46-0 loss at then-No. 8 Coastal Carolina on Saturday … The Runnin’ Bulldogs were out-gained, 485-272, as quarterback Tyrell Maxwell led the team with 50 rushing yards and was 4-of-13 with 90 yards through the air … This season, Maxwell has rushed for 652 yards (three touchdowns) and thrown for 705 yards (five touchdowns), while All-Big South selection Mike Estes ranks third in the conference in touchdown receptions (4) … Maxwell ranks sixth in passing touchdowns (5) and passing yards (705), and fifth in completion percentage (47.5), rushing yards (81.5) and total offense (169.6), seventh in total offensive TDs (8) and 10th in all-purpose yards (81.5) … As a team, Gardner-Webb has been shutout in three of its nine games, while being held to 13 points or less six times en route to averaging 11.6 points per game … Defensively, Gardner-Webb has forced 13 turnovers (seven interceptions/six fumbles), while it has held the opposition to eight touchdowns in 27 trips to the red zone … Senior nose guard O.J. Mau earned a handful of preseason honors – 2015 STATS FCS Defensive Player of the Year Watch List, Preseason First-Team FCS All-America selection and Preseason Big South Defensive Player of the Year … He and teammate Jebrai Regan lead all defensive lineman in the Big South in tackles (5.2 per game), while he’s tied for sixth in tackles for loss (1.0 per game) … Overall, Gardner-Webb has four of the top six spots in the Big South rankings for tackles as Chad Geter is third (8.9), Azziz Higgins is fourth (8.6), Tanner Burch is fifth (8.0) and Aaron Cook is sixth (7.7) … Geter and Cook also rank seventh (4.0) and eighth (3.5) in total sacks … Geter missed the final nine games of the 2014, was a 2013 Big South selection and received a pair of Big South Defensive Player of the Week honors this season (vs. Liberty and Presbyterian) … Geter is also a FCS All-America candidate … Spencer Havird ranks second in the conference in passes defended (1.11).

Saturday marks the third meeting between the two programs as ETSU defeated Gardner-Webb, 30-17, in 2001, while the Runnin’ Bulldogs handed the Bucs a 13-10 setback in 2012 … The win in 2001 came in ETSU’s home opener as tailback and current ETSU Senior Associate Athletic Director/COO Scott Carter scored touchdowns on consecutive drives and quarterback/current color analyst on the Buccaneer Sports Network Matt Wilhjelm hit wide receiver Cecil Moore for the first touchdown of the game on a 9-yard strike … Wilhjelm, who completed his first 11 passes of the game, finished with 228 yards passing and the one touchdown … Moore hauled in eight passes for 117 yards, while Carter led the Bucs with 68 yards on 14 carries … Defensively, cornerback Tony Tiller posted seven tackles and had two key third quarter interceptions, while linebacker Marco Bryant tallied a game-high 14 tackles ... A year later, the Bucs suffered the 13-10 loss at Gardner-Webb in a monsoon, as the game was halted for 76 minutes towards the end the third quarter due to heavy rain and lightning … ETSU’s offense only managed 229 yards on offense, while missing two field goals and having a touchdown called back on a holding penalty … On the third play of the game, Dashannon Gamble threw an interception to set up a 16-yard touchdown pass by the Runnin’ Bulldogs, while GWU went 73 yards in 14 plays to kick a field goal on its next possession and led, 10-0 … Kicker Scott Salmons pulled ETSU within a touchdown as he nailed a 25-yard field goal early in the second quarter, but he missed on a 46-yard attempt near the end of the half and the Runnin’ Bulldogs connected on a field goal of their own to take a 10-point lead into the locker room, 13-3 … As the rain came down even harder in the third quarter, the Bucs had a 13-yard touchdown run by Gavin Varner called back due to the holding penalty, while the field goal attempt was blocked … ETSU’s lone touchdown came on a 5-yard run by Varner, marking his first score in the Blue and Gold.

Fans can also listen to the radio call on WXSM-AM 640 The Extreme Sports Monster or on 104.9 NASH Icon. Parker Schwartz will handle the play-by-play and former Buccaneer quarterback Matt Wilhjelm will be the color analyst.

In addition to following the Bucs on your mobile device and/or tablet with live audio and video, fans can get up to the minute stats by following the action via live stats courtesy of GWUSports.com. Fans can access live stats on their computers, mobile devices or tablets by clicking here.

The Bucs conclude the 2015 season next Saturday when ETSU hosts Kentucky Wesleyan … Kickoff is set for 1 p.m., at Kermit Tipton Stadium.