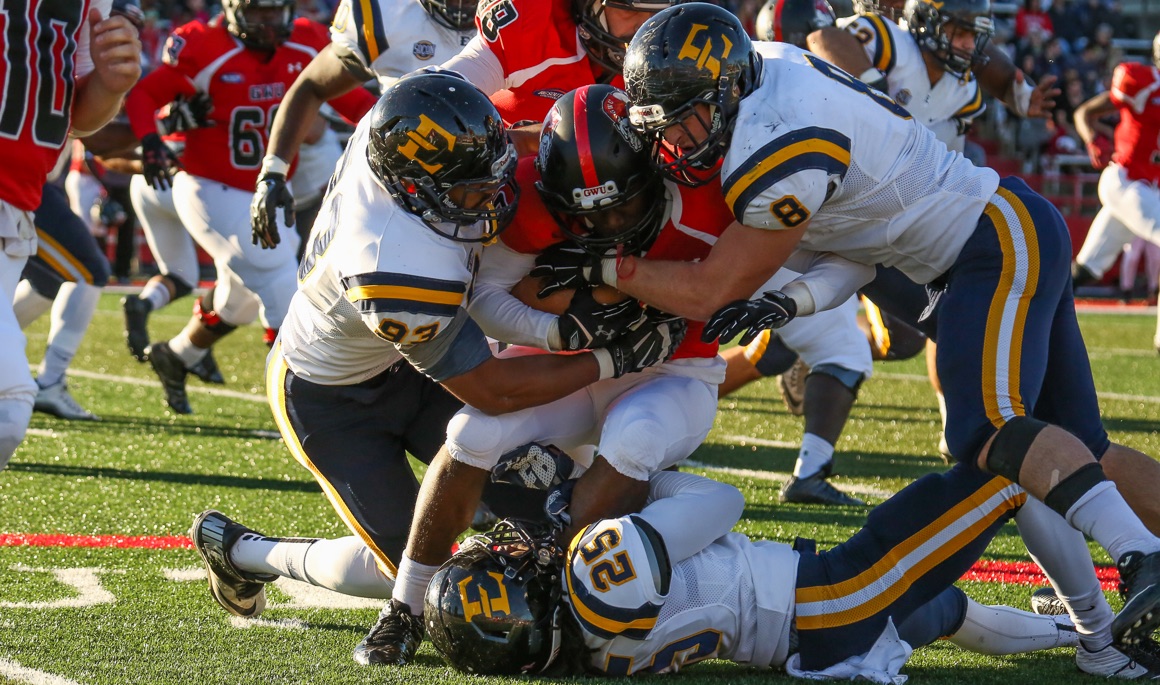 BOILING SPRINGS, N.C. (Nov. 14, 2015) – Facing another top FCS defensive unit, the ETSU football team couldn’t gain any momentum on the offensive side of the ball, while Gardner-Webb did its damage with a pair of quick touchdowns at the end of the first half to defeat the Buccaneers, 28-3, on Saturday afternoon at Spangler Stadium.

ETSU, who has played five FCS teams ranked within the top-30 in total defense, was held to its lowest offensive output of the season as the Bucs ran 46 offensive plays for 126 yards. The Runnin’ Bulldogs entered the game ranked 27th nationally in total defense and held the Buccaneers to a season-low 54 rushing yards on 27 attempts, while limiting red-shirt freshman quarterback Austin Herink (Cleveland, Tenn.) to 72 yards on 12-of-19 passing. Herink was sacked four times for negative 26 yards and the offense was kept out of the end zone for a second straight game as ETSU’s lone score came on JJ Jerman’s (Seymour, Tenn.) 34-yard field goal in the second quarter.

The Buccaneer defense kept Gardner-Webb in check early on as the Runnin’ Bulldogs scored seven points in their first four possessions, but sophomore quarterback Tyrell Maxwell gave the Blue and Gold fits at the end of the first half. Maxwell, who accounted for 268 of the Runnin’ Bulldogs’ 446 yards, capped off a 9-play, 89-yard drive on a five-yard run with 1:54 remaining in the second quarter and hit tight end Mike Estes on a seven-yard touchdown reception with 32 seconds left before the break, putting the Red and Black up, 21-3.

Defensively, duo of River Boruff (Sparta, Tenn.) and Dylan Weigel (Pickerington, Ohio) combined for 33 tackles, while Tony Welch (Pickerington, Ohio) added a season-high 15. Like Welch, Boruff posted a season-best 18 tackles and Weigel notched 15 hits and had one of ETSU’s two sacks. Weigel has registered double-digit tackles in eight of the 10 games this season, including his last five outings. Freshman defensive back Keanu James (Dacula, Ga.) registered his first collegiate interception in the fourth quarter, while the Bucs’ defensive unit ended with five tackles for loss.

Freshman defensive back Domenique Williams (Charlotte, N.C.) began the day tied for the ETSU single-season record for return yards with 732. The Charlotte, N.C. native finished with 64 yards on Saturday to move past Ronnie Horton (1980) for the program mark at 796.

Playing its final road game and against its last FCS opponent of the year, ETSU dipped to 1-9 on the season, while Gardner-Webb – who defeated then-No. 15 Liberty this season – improved to 4-6. The Bucs wrap up the 2015 campaign next Saturday when the Blue and Gold host Kentucky Wesleyan at 1 p.m., from Kermit Tipton Stadium.

Gardner-Webb looked to have got off to a positive start as they took the opening drive 72 yards, but after Boruff stuffed a run on 3rd-and-6, Paul Schumacher’s 25-yard field goal attempt was wide left. Unfortunately, the Buccaneer offense went three-and-out, and the Runnin’ Bulldogs went on a 15-play, 68-yard scoring drive to go up 7-0 on a two-yard touchdown run by Jonathan Blackmon with 1:51 left in the first quarter.

ETSU’s offense moved the ball down field on its second drive of the afternoon as the Blue and Gold drove 63 yards on 11 plays and cut into the deficit as Jerman connected on a 34-yard field goal, making it a 7-3 game at the 12:08 mark of the second quarter. Red-shirt freshman wide receiver Demetrius Anthony (Fountain Inn, S.C.) highlighted the drive as he put the Blue and Gold in the red zone with a 23-yard run out of the wildcat formation.

From there, it became a defensive battle and a game of field position, as both teams were held to consecutive three-and-outs following the Jerman field goal, but Gardner-Webb’s offense came to life at the end of the half.

After being held to zero yards in their two series following the Blackmon touchdown, the Runnin’ Bulldogs compiled 139 yards in the final 12 plays of the half to go up 21-3 at the break.

For the half, the Bucs were outgained by 185 yards as the Runnin’ Bulldogs ran 47 plays for 279 yards (144 rushing/135 yards), compared to the Bucs recording 94 yards on 23 plays (53 rushing/41 passing). Gardner-Webb had 15 first downs to ETSU’s four, while going 6-of-10 on third down and scoring on three of its four red zone chances. The Bucs were held to 1-of-6 on third down and scored on the one red zone opportunity.

In the second half, the Bucs took the opening kickoff of the third quarter and drove to the Gardner-Webb 39-yard line, but ETSU turned the ball over on downs, as Herink’s pass to Kobe Kelley (Knoxville, Tenn.) was called incomplete on 4th-and-4.

Gardner-Webb then ate up over seven minutes on its first possession of the second half but came away empty as Schumacher missed on 23-yard field goal; however, the Bucs were still unable to muster any momentum on the offensive side of the ball. Despite Falon Lee (Macclenny, Fla.) picking up a 14-yard run and Gardner-Webb committing a 10-yard holding penalty on the ensuing possession, ETSU’s drive stalled when Herink was sacked and Justin Gilliam (Jonesville, Va.) was called for a false start, resulting in Watson’s fifth punt of the afternoon.

The Runnin’ Bulldogs tacked on their final score of the afternoon when Maxwell hit Willie Jackson for a 34-yard touchdown reception on 4th-and-6 to go up 28-3 with 12:42 left in the game.

Overall, Lee rushed for 26 yards (eight attempts), while Hunter Wike (Canton, N.C.) and Malik Styles (Dandridge, Tenn.) both hauled in three catches. Dalton Ponchillia (Nashville, Tenn.) extended his streak of having at least one catch to 10 straight games as he caught one pass for 12 yards.

In total, 12 of Gardner-Webb’s 75 tackles went for a loss, while the hurried Herink four times and broke up four of his passes. Jebrai Regan led the squad with nine tackles (four for loss) and All-American nose guard OJ Mau accounted for two of the four sacks.

The Bucs conclude the 2015 season next Saturday when ETSU hosts Kentucky Wesleyan. Kickoff is set for 1 p.m., at Kermit Tipton Stadium.