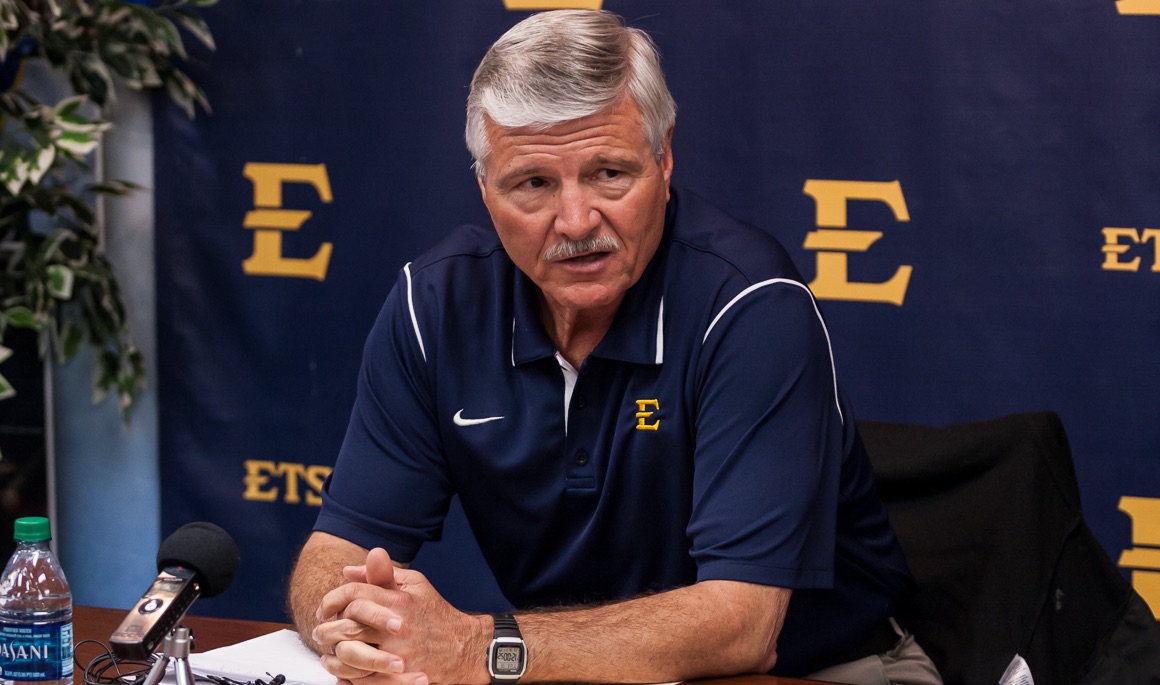 Head coach Carl Torbush and players River Boruff (Ooltewah, Tenn.) and Matt Pyke (Clinton, Tenn.) met the media at the press luncheon as the Bucs head into game week against Kentucky Wesleyan on Saturday afternoon. Kickoff of the season finale is set for 1 p.m., at Kermit Tipton Stadium.

Below are comments by Coach Torbush, Boruff and Pyke.

First off, I would like to congratulate Coach Forbes and the men’s basketball team on their win this morning. They played a great game and the atmosphere was impressive for being such an early game. They played hard and fast, and got a strong win. I know Green Bay has great history, so they beat a really good team. I am excited to see where they can take it.

Yesterday was a great day with the groundbreaking and we appreciate the strong turnout. There was a lot of passion and excitement built around yesterday’s groundbreaking and we are ready to move forward with the process. It was great to see a lot of the alumni, faculty, coaches, players and donors out at the event. This is an exciting time for all of us and it’s also a great time to be a Buc.

LOOKING BACK AT GARDNER-WEBB

Saturday’s game was disappointing and frustrating, but it’s a game we build off of. Once again, we played another good defensive football team as we have now played five FCS teams ranked in the top-25 in total defense.

We were in the game for most of the first half as it was 7-3 with three minutes to go in first half, but things took a quick turn and we were down 21-3 at halftime. We did some good things but not enough good things to keep us in the game going into the fourth quarter.

I thought we played well in spurts but the two big plays at the end of the first half really hurt us.

We competed for four quarters, but offensively we didn’t convert on third down for second straight week. We got off the field too quick and the time of possession was around 3-to-1, which is also not a good stat to have.

Defensively, we have been getting better each week, but this past week was a little disappointing. We knew going into the game if we could stop their quarterback then it would give us a chance to win, and we didn’t stop him. He had almost 300 total yards on offense and we gave up some big plays. He’s a good-sized player, while their offensive line is big and strong.

Individually, we had three guys with double figures in tackling. That is good for them as it shows the made a lot plays, but it’s bad for the team since we had to make a lot of plays. River (Boruff) has made a tremendous amount of improvement throughout the season and he takes great pride in his work. I am excited where the guys are headed.

Kentucky Wesleyan has a solid football team. They are a good throwing team and throw the ball all over the field. They throw the ball about 40-50 times a game. Their quarterback has a lot of confidence and can throw from different arm slots. They throw a deep a lot. It will be the most we have seen this season. They have very quick and big wide receivers. Their running backs aren’t averaging many yards on the ground, but they have the ability to break long runs. We will have to do well on defense and limit their scoring opportunities.

ON PLAYING FINAL GAME OF THE SEASON

We want to go into the offseason knowing we made improvement these last five games. We lost some of that last week, but we need to finish strong this weekend. This is an exciting opportunity to be at home and play our last game of the season. The players are playing hard and that’s important to see. I think the players have responded well all year long. They have competed in practice every day and have done good things out in our community. We are definitely looking forward to improving the program and finding out who the best players are in each position. We know it will get tougher next year being in the SoCon.

ON THE DIFFERENCE BETWEEN A WIN AND LOSS IN SEASON FINALE

There are a lot of differences between winning and losing the final game of the season. Things are a lot better with a win as you are ending on an improved note and have a win streak going into next season. For us, it’s important to make improvement right now and feel good about ourselves heading into the spring.

ON BEING BANGED UP

We can’t use the injuries as an excuse. Every team has to do deal with them and play through the pain. If one player goes down, the one behind him needs to step up. Right now we are concerned about the guys who are on the field and how they will compete and lead. We find out who the true leaders are during these adverse situations.

THE IMPORTANCE OF FINISHING THE SEASON WITH A WIN ON SATURDAY

We know he likes to throw the football and that will be emphasized this week in practice. We will work on the passing game this week. He’s an exceptional quarterback and we need to be prepared to stop him and their offense.

THE IMPORTANCE OF FINISHING THE SEASON WITH A WIN ON SATURDAY

To finish this first season with a win is important. It will improve our mindset as we head into the offseason and we can build on that as we get back to work in the spring.

ON THE RUN GAME GETTING BETTER OVER THE PAST FEW WEEKS

We’ve put a lot of emphasis on the offensive line being physical these past few weeks. I think we have done a good job of doing that, which has opened some lanes for our running backs. We take great pride in creating those running lanes and it’s fun to see the backs finish with big runs.

ON THE GROWTH OF THE OFFENSIVE LINE

It was a process at first, but we have come together throughout the season. We work hard as a unit and are very competitive. It’s important that we communicate and work as a team. I believe we have done that over these past few weeks.