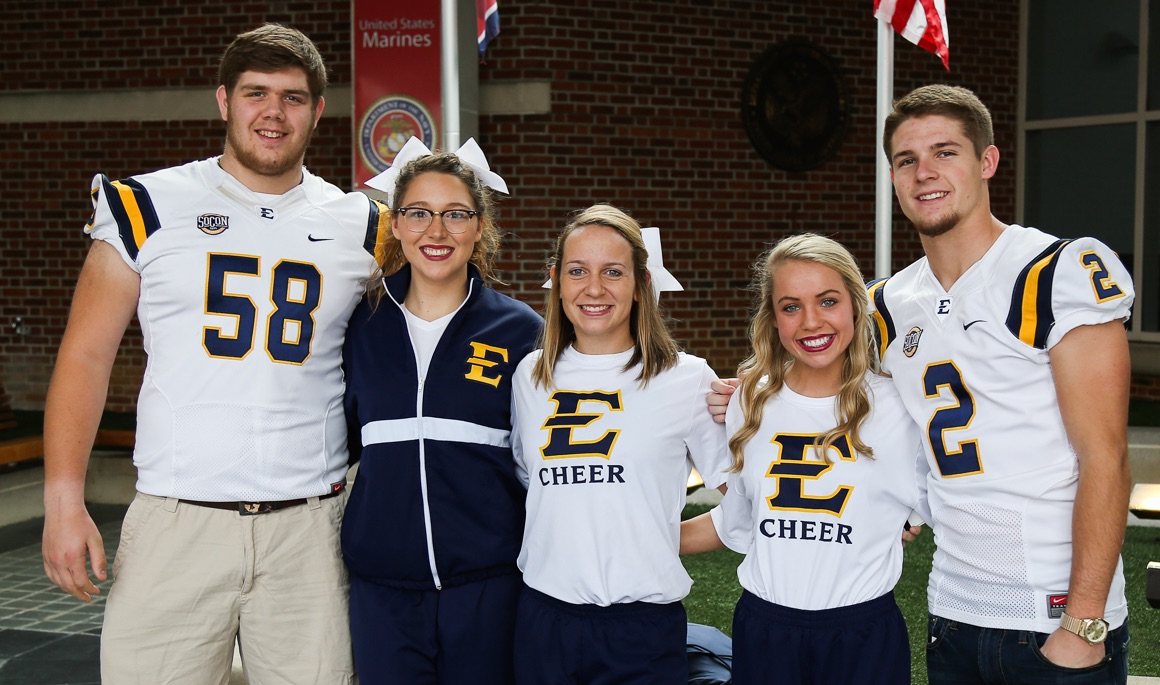 JOHNSON CITY, Tenn. (Nov. 19, 2015) – Members of the ETSU football team and cheerleading squad made a special visit to the Mountain Home VA on Thursday morning.

The Bucs, who are playing their final game of the season on Saturday afternoon at Kermit Tipton Stadium, met with the Veterans and personally invited them to be special guests.

ETSU football head coach Carl Torbush talks about Saturday’s Military Appreciation Day and how the Bucs are honored to recognize the current and former military members.

“We are excited to be honoring our military members this weekend,” said Torbush. “Without their courageous efforts, we wouldn’t be here today. To have some of our players and cheerleaders go to the VA, talk with the Veterans and invite them to our final game is a small token of our appreciation.”

For offensive lineman Greg McCloud (Nashville, Tenn.), the visit to the VA hit close to home for the Buccaneer freshman.

“I enjoyed going to the VA and meeting the Veterans, because I have a strong heart for those who served and are currently serving our country,” said McCloud, whose great grandfather received a Purple Heart and Bronze Star in World War II and grandfather was in the National Guard. “Today’s visit really hit close to home since I’ve had family members serve and get injured in war. It really affects me and touches my heart. I met a man today who used to come to all our football games in the past. He was excited to see us and is happy to see football back at ETSU.”

Red-shirt freshman wide receiver Hank Black (Knoxville, Tenn.) talked about his experience visiting the VA and how it was an honor to have met those who protected our country.

“Visiting the VA was an eye-opening experience,” said Black. “The people we met today have given so much to our country and it was special to meet some of the Veterans. It’s an honor we get to recognize them on Saturday with Military Appreciation Day.”

Saturday’s game is Military Appreciation Day and the ETSU Department of Intercollegiate Athletics is providing a complimentary ticket to all Veterans who present a valid military I.D. at the ticket booths surrounding the stadium. Kickoff is set for 1 p.m.

To honor all current and former military members, ETSU alum and Lt. Gen. (Ret.) Ron Hite and members of the ETSU ROTC will lead the Buccaneers out on the field by carrying the American Flag on Saturday. Hite, a 1964 graduate of ETSU, retired from the military in 1997 after 33 years of service where he had been awarded two Distinguished Service medals, four Legions of Merit, three Meritorious Service medals, paratrooper wings and the Ranger Tab. In addition, he received the ETSU Distinguished Alumni in the Armed Forces award in 1989, while he was involved with the development of the HUMMER military vehicle and several major weapons systems.

To begin the morning, members of the Rolling Thunder will lead the ETSU busses from the Dome to Kermit Tipton Stadium at 11 a.m.