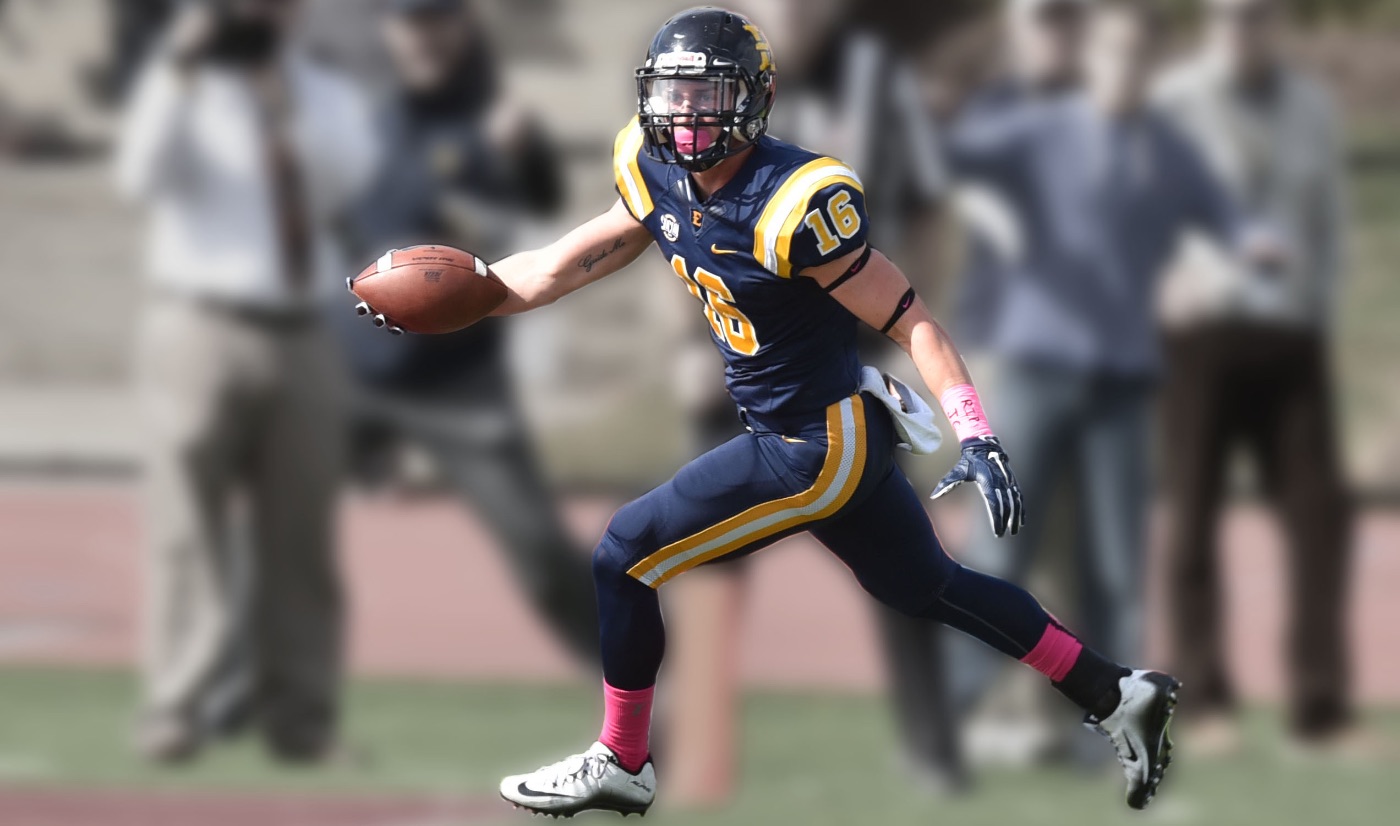 JOHNSON CITY, Tenn. (Nov. 20, 2015) – The ETSU football team wraps up its 2015 season on Saturday afternoon as the Buccaneers host Kentucky Wesleyan. Kickoff is set for 1 p.m., at Kermit Tipton Stadium.

The ETSU Department of Intercollegiate Athletics is holding a a pair of special promotions at this Saturday’s football game. The presenting game sponsor that day will be Jimmy John’s.

The Bucs will host a special Military Appreciation Day and will provide a complimentary ticket to all Veterans who present a valid military I.D. at the ticket booths surrounding the stadium. In addition, the ETSU Marching Bucs will also be hosting a special band reunion during the game, which will include a unique opportunity for former members of the band to perform at halftime with the Marching Bucs.

As part of the Military Appreciation Day, ETSU athletics personnel have already distributed a special allotment of tickets to Veterans at the nearby Mountain Home VA. Any family of Veterans will also be able to purchase specially-priced companion tickets for $10.

For more information on the Marching Bucs reunion, click on the following link: http://bit.ly/1QecVKd

To honor all current and former military members, ETSU alum and Lt. Gen. (Ret.) Ron Hite and members of the ETSU ROTC will lead the Buccaneers out on the field by carrying the American Flag on Saturday. Hite, a 1964 graduate of ETSU, retired from the military in 1997 after 33 years of service where he had been awarded two Distinguished Service medals, four Legions of Merit, three Meritorious Service medals, paratrooper wings and the Ranger Tab. In addition, he received the ETSU Distinguished Alumni in the Armed Forces award in 1989, while he was involved with the development of the HUMMER military vehicle and several major weapons systems.

To begin the morning, members of the Rolling Thunder will lead the ETSU busses from the Dome to Kermit Tipton Stadium at 11 a.m.

Playing its final road game and facing its final FCS opponent of the season, ETSU couldn’t take down Big South foe Gardner-Webb as the Runnin’ Bulldogs scored the final 21 points en route to defeating the Buccaneers, 28-3, last Saturday at Spangler Stadium … Despite getting a season-high 18 tackles from River Boruff (Sparta, Tenn.) and 15 tackles each by Dylan Weigel (Pickerington, Ohio) and Tony Welch (Pickerington, Ohio), the Bucs’ offense – who were facing their fifth opponent ranked in the top-25 in total defense among FCS teams – was limited to a season lows in total yards (126), rushing yards (54), passing yards (54) and first downs (9) … On its second possession of the game, Gardner-Webb recorded a 15-play, 68-yard scoring drive to go up, 7-0, while the Bucs responded on the ensuing drive as a 34-yard field goal by JJ Jerman (Seymour, Tenn.) made it, 7-3 … However, after ETSU’s defense held the Runnin’ Bulldogs to zero yards on their next two possessions, Gardner-Webb scored on its final two drives of the half to extend the lead to, 21-3 … The Runnin’ Bulldogs ran 12 plays and totaled 139 yards the final two drives … Unfortunately, ETSU’s offense couldn’t answer the scoring drives and was held scoreless following Jerman’s eighth field goal of the season … Overall, Gardner-Webb’s quarterback Tyrell Maxwell accounted for 268 of its 446 yards on offense, while winning the time of possession, 37:25-22:35 … The Runnin’ Bulldogs were also 9-of-19 on third down (3-for-3 on fourth down), compared to the Bucs going 1-of-12 on their third down opportunities … Freshman defensive back Domenique Williams (Charlotte, N.C.) broke the ETSU single-season record for return yards in the setback as he entered the game tied with Ronnie Horton (1980) with 732 yards, but after totaling 64 return yards, the Buccaneer rookie set a new record with 796 yards … The Blue and Gold also won the turnover battle as Keanu James (Dacula, Ga.) registered his first collegiate interception, while ETSU didn’t turn the ball over for its second straight contest … Offensively, wide receivers Hunter Wike (Canton, N.C.) and Malik Styles (Dandridge, Tenn.) both had three receptions each, while Falon Lee (Macclenny, Fla.) paced the backs with eight carries for 26 yards … For the second time this season, quarterback Austin Herink (Cleveland, Tenn.) played the entire game as he finished 12-of-19 with 72 yards, but was sacked four times for -26 yards.

Kentucky Wesleyan (4-5) had its four-game win streak snapped last week as the Panthers fell at home to Alderson Broaddus, 48-29, in the G-MAC Founders Cup game … During the four-game win streak, which included a 69-61 victory over Alfred State, the Panthers averaged nearly 50 points … Kentucky Wesleyan, who is playing this season and next season as an independent, will start playing in the Great Midwest Athletic Conference (G-MAC) in 2017 … As a team, the Panthers rank among the Division II national leaders in passing offense (9th, 317.4), passing efficiency (17th, 153.9), tackles for loss (19th, 8.2), 25th in completion percentage (62.1) and 33rd in rush defense (123.3) … Individually, quarterback Dalton Oliver is 11th in passing yards per game (302.7), 18th in passing touchdowns (27) and 25th in total offense (293.1), wide receiver Keelan Cole is second in receiving touchdowns (15) and receiving yards per game (136.0), fifth in receiving yards (1,224), and eighth in all-purpose yards (173.7) and fellow wide receiver Xavier Mitchell ranks sixth in receptions per game (8.0) … In last week’s setback to Alderson Broaddus, Cole and Mitchell combined for 18 receptions for 205 yards and three touchdowns, while Oliver was 29-of-51 with 293 yards, three touchdowns and two interceptions … Of their 3,543 yards on offense, 81-percent has been totaled through the air as the Panther quarterbacks have passed for 2,853 yards this season … Overall, Kentucky Wesleyan’s offense has turned the ball over 17 times (11 interceptions/six fumbles), while its defense has forced 16 turnovers (seven interceptions/nine fumbles) … Defensively, senior linebacker Cody Mills leads the team in tackles (68) and tackles for loss (9.5), while senior defensive back Yorell Branch has a team-best three interceptions and senior defensive end Micah Crutcher has four sacks in five games.

Saturday marks the first-ever meeting between the two programs.