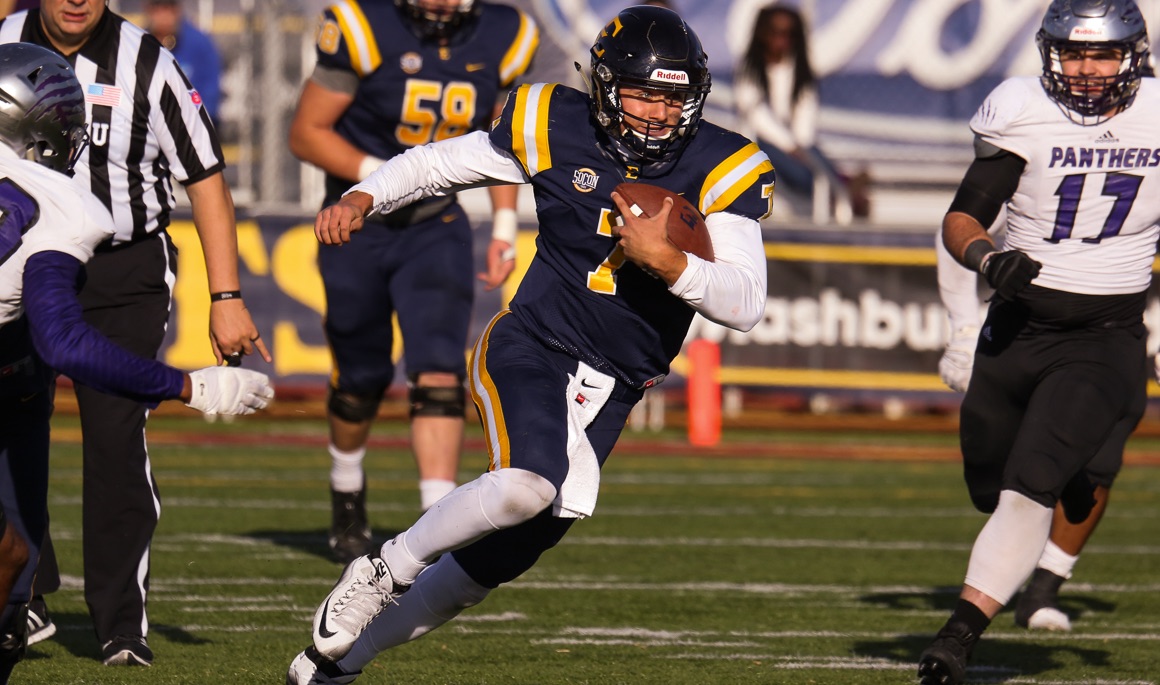 They did just that.

Herink, who scored the first touchdown of the afternoon on a nine-yard run midway through the first quarter, rushed for a season-high 134 yards and also completed 14 of his 17 passes for 220 yards and one interception. Lee recorded 62 yards on his two grabs and rushed 18 times for 79 yards, while red-shirt freshman running back Jajuan Stinson (Knoxville, Tenn.) joined Herink with a 100-yard day on the ground as he registered 102 yards on 14 carries. Stinson, who rushed for over 100 yards three time this season, also caught a 24-yard touchdown from Herink in the third quarter. Herink’s last touchdown pass of the afternoon went to red-shirt freshman Hunter Wike (Canton, N.C.) – a 50-yard reception in the fourth quarter – and red-shirt freshman wide receiver Demetrius Anthony (Fountain Inn, S.C.) threw for the other score as he completed a 40-yard strike to Lee on the opening drive of the third quarter. Wike led all receivers with four catches for 80 yards, while eight different Buccaneers hauled in a catch in the season finale.

As a group, ETSU rushed for a season-high 314 yards and registered 574 yards of total offense, marking the most for both stat lines since Sept. 16, 2000 when the Bucs defeated VMI, 38-3. In that game, ETSU rushed for 343 yards and finished with 581 total yards.

ETSU, who was playing its first season since dropping the program in 2003, finished 2-9. Overall, the Bucs played five FCS opponents ranked in the top-25 in total defense, made a trip to then-No. 21 Montana State, and also faced three teams ranked in the top-35 in total offense.

"This was a great win and it's great way to end the season'" said Coach Torbush. "Our goal was to win this game and end the season on a positive note. We did a lot of good things today and gained some confidence as we head into the off-season. Like I told our players, it's a lot easier going into the off-season with a win in the final game. It's a huge springboard for us."

After both teams had issues holding onto the football on their first drive of the game – ETSU who fumbled on its opening possession – drove 65 yards on eight plays to take a 7-0 lead on a nine-yard run by Herink for his fourth rushing score of the season. The Bucs ran the ball six times for 44 yards on the drive, while Herink also completed his two passing attempts for 21 yards.

The game turned into a defensive battle following Herink’s touchdown as ETSU’s offense ran six plays for seven yards and threw an interception on its next two possessions. However, as the Buccaneer defense kept the Panthers off the board on their first six drives, the Blue and Gold posted their longest scoring drive of the year to go up, 14-0. ETSU capped off a 7-play, 97-yard scoring drive when Herink found Lee for a 22-yard touchdown reception with 6:56 remaining in the half. Stinson got the Bucs out of their own end zone with a 19-yard run on the first play of the drive, while three plays later Herink ripped off his longest rush of the year as he took off 40 yards to the Kentucky Wesleyan 29-yard line.

ETSU was unable to pitch a shutout in the first half as the Panthers – who stopped a potential Buccaneer scoring drive after the Blue and Gold got to the Kentucky Wesleyan 26-yard line with less than two minutes remaining – scored when Oliver threw a deep ball to Keelan Cole for a 42-yard touchdown, making it a 14-7 game with 33 seconds left before halftime.

The Bucs ran 34 plays for 235 yards (153 rushing/82 passing) in the first 30 minutes, while 78 of Kentucky Wesleyan’s 147 yards in the first half came on its scoring drive at the end of the half. ETSU defense held the Panthers to negative-2 rushing yards and 149 passing yards. The Blue and Gold were 4-of-8 on third down conversions and scored on their two red zone chances.

Both teams put up some fireworks in the second half as they combined for 48 second-half points.

ETSU came out blazing and tossed in some trickery on its opening drive of the half as the Bucs scored on a double-pass play to go ahead, 21-7. Following a pair of first down runs by Herink, he started the touchdown play with a backwards pass to Anthony and the former Buccaneer quarterback and current receiver hit Lee for a 40-yard score to punctuate a 4-play, 79-yard scoring drive.

The Buccaneer defense flexed their muscles on the ensuing kickoff as Bouyer sacked Oliver for a loss of seven on 4th-and-1 to set up a 4-play, 39-yard scoring driving as Stinson found the end zone on a 24-yard touchdown reception, putting ETSU up 28-7 with 11:10 remaining in the third quarter.

Unfortunately, Kentucky Wesleyan scored on its next two drives to pull within seven, 28-21. Following the Stinson score, the Panthers responded with an 8-play, 65-yard scoring drive when Oliver found Travion Tucker for an 18-yard touchdown reception. From there, Herink fumbled on the ensuing possession and Kentucky Wesleyan needed only five plays to go 37 yards for its second straight score, as Oliver connected on a 16-yard strike to Darius Chandler with 2:02 remaining in the third quarter.

Despite moving the ball down field on their next possession, the Bucs came away empty when JJ Jerman’s (Seymour, Tenn.) 27-yard field goal attempt missed wide left, giving the Panthers the ball at their own 20 with 11:22 remaining in the game

ETSU’s defense made a stop as it forced a three-and-out – highlighted by a sack from Dossett on 3rd-and-15. From there, the Buccaneer offense marched down field on their next drive en route to extending the lead back to 14, 35-21, after Herink hit Wike down the sideline for a 50-yard score on 3rd-and-19.

The scoring continued with Kentucky Wesleyan taking the kickoff and etching up a 6-play, 82-yard drive, which was capped by three straight completions to Keelan Cole – the final being an 11-yard score. The Panthers missed the extra-point leaving the Bucs with a 35-27 lead and 4:49 showing the clock.

Fortunately, ETSU’s offense had more gas left in the tank as the Bucs put the exclamation point on the game when Herink put the pedal to the metal and ripped off a 37-yard run up the middle on 2nd-and-5 for the final touchdown of the contest with a little over two minutes left.

The Panthers got to the Bucs’ 29-yard line on their final possession, but Lott’s interception in the end zone iced the game.

To go with its best offensive output of the year, ETSU – who entered the game going 2-for-31 on third downs in its last two games – went 10-of-16 on third down and also converted on a fourth down attempt. The Bucs also scored on two of their three red zone opportunities.

Kentucky Wesleyan was led by Oliver’s 388 passing yards and four touchdowns, while Cole and Xavier Mitchell combined for 24 catches and 248 yards. Both receivers ended with 12 catches and Cole had two touchdowns to go with his 121 receiving yards.

Saturday’s game not only marked the end of the season, but the ETSU Department of Intercollegiate Athletics held Military Appreciation Day and honored those who have served or are continuing to serve our country as ETSU alum and Lt. Gen. (Ret.) Ron Hite and members of the ETSU ROTC led the Buccaneers out on the field by carrying the American Flag.

The ETSU Marching Bucs will also hosted a special band reunion on Saturday, which gave an opportunity for former members of the band to perform at halftime with the Marching Bucs.