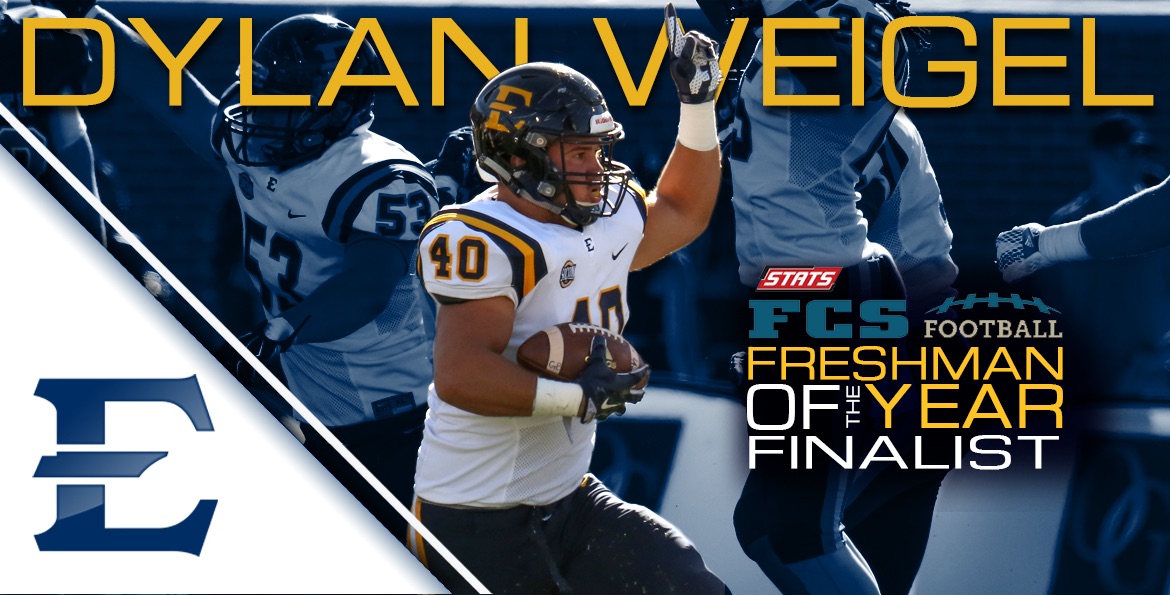 JOHNSON CITY, Tenn. (Nov. 24, 2015) – Finalists for the STATS FCS Freshman of the Year award were announced late Monday and ETSU linebacker Dylan Weigel (Pickerington, Ohio) was one of the 20 candidates selected.

Weigel, who totaled a team-leading 127 tackles in 11 games for the Blue and Gold, also recorded 10.5 tackles for loss, two sacks, two forced fumbles, and two fumble recoveries. The Buccaneer red-shirt freshman ranks among FCS national leaders in solo tackles (2nd, 7.2) and total tackles (T9th, 11.5), while his 20-tackle effort against Emory & Henry is tied for the sixth highest total this season in FCS play. Furthermore, Weigel’s total tackles, solo tackles (79) and 20-tackle game are the most by a freshman this season at the FCS level.

Weigel paced the Bucs in tackles eight times, while posting double-digit tackles in nine of the 11 games. His 127 tackles this season are the most by a Buccaneer since 1998 when Kevin Peterson posted 139 hits.

In October, the Pickerington, Ohio native was also was named one of the top five freshmen players in the FCS by Brian McLaughlin of HERO Sports.

All 20 candidates for the STATS FCS Freshman of the Year award have had quite an impact for their respective teams, but only one can take home the honor. A national panel of sports information and media relations directors, broadcasters, writers and other dignitaries will cast their ballots based on the regular season. The winner will be honored at the STATS FCS Awards Banquet and Presentation on the eve of the Jan. 9 FCS championship game in Frisco, Texas.

ETSU fans wanting to receive Buccaneer news, score updaes, in-game promotions and much more sent to their mobile device can do so by signing up for “Buc Updates.” Click here to sign up today!