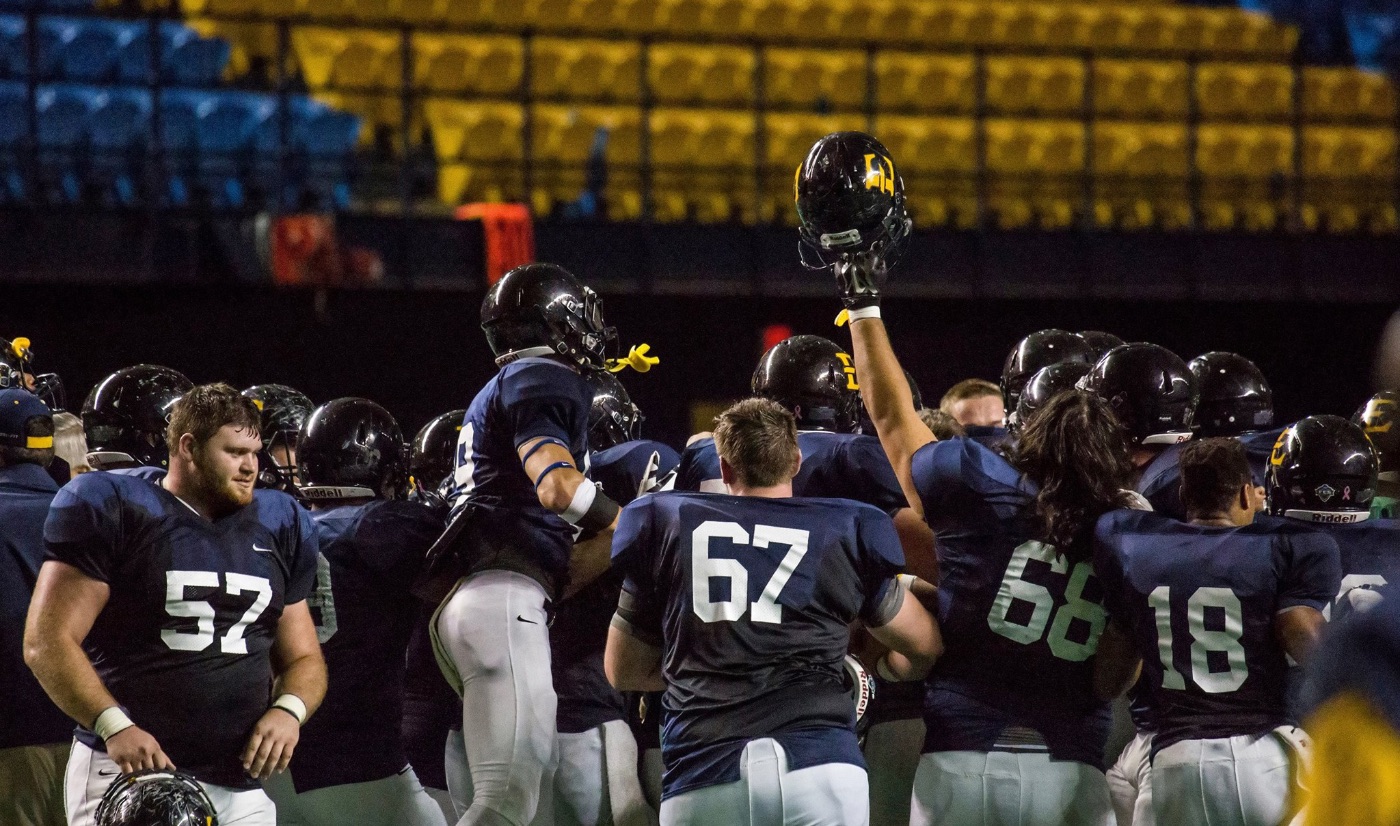 Bucs close out spring practice in front of over 2,800 fans Saturday afternoon inside MSHA Athletic Center

JOHNSON CITY, Tenn. (April 9, 2016) – In front of 2,815 fans Saturday afternoon inside the MSHA Athletic Center, the Blue team (offense) rallied from an early 27-7 deficit to defeat the Gold team (defense) as freshman kicker Landon Kunak (Spartanburg, S.C.) made the game-winning field goal to cap off a 31-30 comeback in the MSHA Blue-Gold Spring Game.

At halftime, the ETSU football team was honored for its hard work and successes both on and off the field of play … The 2015-16 Buccaneer football team registered a cumulative team GPA of 2.905, with 46 players placed on the Honor Roll for achieving a GPA above a 3.0 and 14 Bucs placed on the Dean’s List for earning a grade point average above a 3.5.

In addition to the achievements in the classroom, the Blue and Gold were recognized for their work within the community … Over the past year, the Buccaneers volunteered time working with Niswonger Children’s Hospital, Mountain Home VA, Kennedy Elementary, Ridgeview Elementary, St. Mary’s School, Boys and Girls Club, Habitat for Humanity, Buccaneer Christmas, Sycamore Creek Church, Rotary Club, Next Level 7 on 7.

At the end of halftime, red-shirt freshman Dylan Weigel (Pickerington, Ohio) was honored for being the national leader in solo tackles among FCS players (7.2 per game), while also being a finalist for the STATS FCS Freshman of the Year Award … Weigel played in all 11 games for the Blue and Gold and totaled 127 tackles with 79 of those being solos … Weigel’s 20-tackle performance against Emory & Henry marked the sixth highest by an FCS player, while it also tied for the second-most in ETSU single-game history … In total, Weigel recorded double-digit tackles in nine games, including six straight to end the season … Dylan was joined by his parents as he received a plaque by the NCAA and a framed certificate from STATS.

The MSHA Blue-Gold Game marked the end of official spring workouts for the Bucs. Coming off its first season as a FCS Independent in 2015, ETSU joins the Southern Conference in 2016. The Bucs open the season on Sept. 3 at Kennesaw State, while hosting Western Carolina in their SoCon opener on Sept. 17 at Bristol Motor Speedway.

For more on ETSU football throughout the spring and summer months visit ETSUBucs.com and click on the football link.