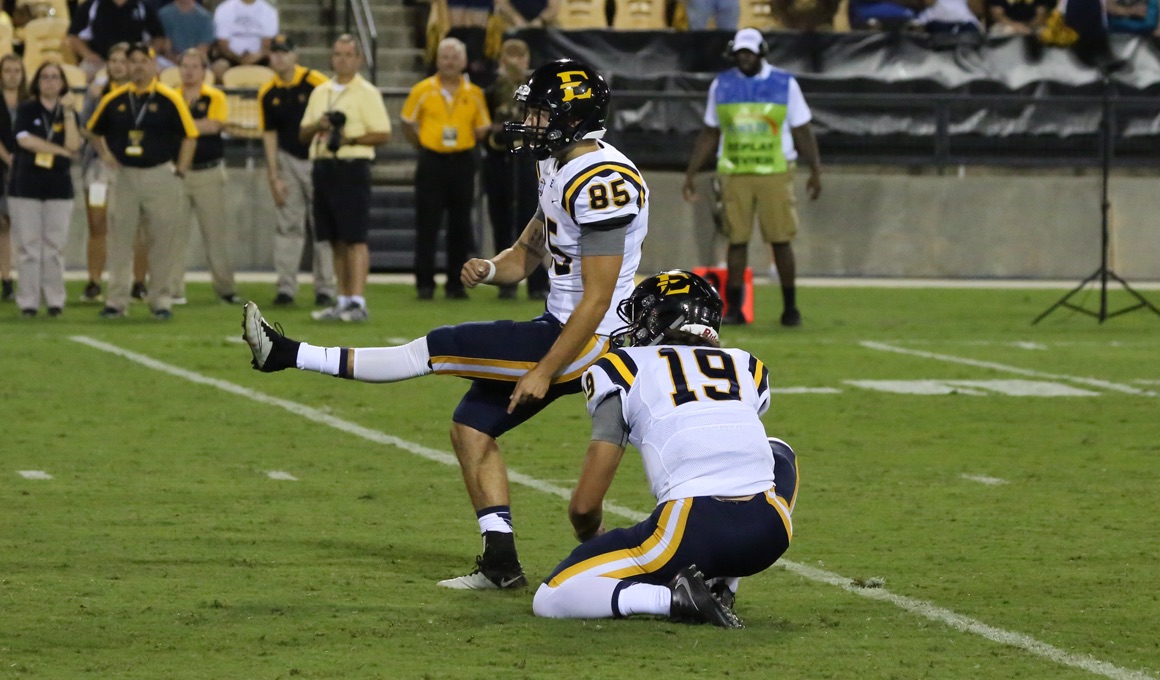 After suffering a lopsided loss to Kennesaw State in the historic return of East Tennessee State football last season, the Buccaneers stood toe-to-toe with the Owls in the 2016 season opener Saturday night at Fifth Third Bank Stadium. Overcoming multiple momentum shifts throughout regulation and two overtimes, the Bucs ultimately took home a hard-fought 20-17 victory thanks to a game-winning 24-yard field goal from JJ Jerman (Seymour).

With the win, ETSU moves to 1-0 on the year and 1-1 all-time against Kennesaw State. Meanwhile, KSU – who was receiving votes in the STATS FCS Top 25 poll – falls to 0-1 on the season. This is the first Football Championship Subdivision win for the Bucs since a 16-13 win over The Citadel in the 2003 season finale.

ETSU 3, Kennesaw State 0 – Just like last season’s opener in Johnson City, the Buccaneers struck first on the scoreboard. Following a recovery of a KSU fumble at the Owls’ 37-yard line, the Bucs drove 17 yards and wrapped up a seven-play drive with a 37-yard field goal from sophomore placekicker JJ Jerman. With 13:23 left in the second quarter, the Bucs led 3-0.

Kennesaw State 7, ETSU 3 – A critical penalty cost the Bucs the lead late in the first half. After what appeared to be a missed field goal attempt by Kennesaw State and the sixth straight ETSU defensive stop of the game, the Bucs were called for a personal foul for “leaping on the center,” giving KSU new life on its final drive of the first half. The Owls capitalized on the Bucs’ gift by wrapping up a 10-play, 50-yard drive with a 9-yard rushing touchdown from quarterback Trey White with just two seconds left in the first half.

ETSU 10, Kennesaw State 7 – The Bucs regained the lead early in the second half with an impressive 10-play, 56-yard drive capped by a 1-yard run from sophomore tailback Jajuan Stinson (Knoxville). However, it wasn’t easy. The drive was powered by a hardnosed 10-yard reception from junior wide receiver Vincent Lowe (Chesapeake, Va.) and another 20-yard pass to wide out Dalton Ponchillia (Nashville) that moved the ball to the KSU 1-yard line. After a pair of instant replay reviews at the goal line on back-to-back plays, the Bucs ultimately finished the drive with a score. Jerman’s extra-point was good and ETSU led 10-7 with 7:45 left in the third quarter.

ETSU 10, Kennesaw State 10 – After struggling against ETSU’s rush defense throughout the game, the Owls finally abandoned their ground game on the first possession of the fourth quarter and went to the air to move the ball to the Bucs’ 25-yard line. A sack by Bucs’ sophomore linebacker Kahlil Mitchell (South Pittsburg) appeared to have moved the Owls out of field goal territory, but KSU’s placekicker Jordan Genovese came through and managed to tie it at 10-10 on a 42-yard field goal with 11:33 left in regulation. The nine-play, 51-yard line drive took 4:18 off the clock.

ETSU 17, Kennesaw State 10 – On the first offensive play of overtime, ETSU quarterback Austin Herink (Cleveland) was sacked for a 10-yard loss, as the Bucs then faced a second down and 20 yards from the 35-yard line. However, the resilience of young Bucs came through again as Herink connected on a 34-yard pass to Ponchillia, setting up a 1-yard scoring run by Herink to make it 17-10.

ETSU 17, Kennesaw State 17 – After holding the Owls on three downs and forcing a fourth down at the 22-yard line, the Bucs just needed one stop for the win. Instead, KSU back-up quarterback Chandler Burks found wide receiver Justin Sumpter for a touchdown. Genovese’s point after was good and the game was tied at 17.

ETSU 20, Kennesaw State 17 – Following a missed 30-yard field goal by Genovese, the Bucs again were pushed back with a holding penalty and faced a first and 20 at the 35-yard line. Herink came through once more with a 20-yard pass to sophomore Hank Black (Knoxville) on third down, keeping the drive alive and moving the ball to the 12-yard line. A 5-yard run by Stinson put the ball at seven and then Jerman came on for the winning kick on second down.

This is a great win for our program and the fans. It says a lot about where we are headed as a program. We have to keep grinding. This is one step out of 11 games, but I want our team to enjoy this win. They deserve to enjoy it as we head into our open week.

Win or lose, I would have felt great about the effort we played with tonight. We were so much better. We have more size, maturity and are a more physical football team this year. We are both entering our second year as programs and both have improved as football teams. Kennesaw State is going to win some ball games this year and it was a great here environment tonight.

LOOKING AHEAD TO BATTLE AT BRISTOL

Moving forward, I would be really shocked and disappointed if we don’t have a big crowd at our “Bucs at Bristol” game on Sept. 17 against Western Carolina. I want to challenge all our fans, everyone around the community and all the schools around our area to come out and attend that game. I want to get a big crowd in there so we can enjoy this once-in-a-lifetime experience.

ON THE GAME-WINNING FIELD GOAL

This is something you always dream about. I went out there – and yes my nerves were running high – but I was ready for it. We prepare for situations like this in practice and it’s a great feeling to have it pay off in a game.

The offense did all the work putting me position to make the kick. They did the hard job. I had the easy part of getting the ball through the uprights. Overall, we wouldn’t have got to that point without our team grinding throughout the entire game.

ON OPENING THE SEASON WITH A WIN
This is a huge win for ETSU and our football program. It feels good to start the season, 1-0.

ON THE STRONG SPECIAL TEAMS PLAY
Our goal as a unit was to get more consistent this season. We played well tonight as Marion (Watson) had three or four punts inside the 20, which helped flip the field position. It was a great special teams day all-around.

SOPHOMORE QUARTERBACK AUSTIN HERINK
ON THE WIN OVER KENNESAW STATE
This is a great feeling. With all of the ups and downs that we went through last season and to win in a fashion like we did tonight is an awesome feeling. We have put in a lot of hard work since we have arrived here and it’s rewarding to get a win here tonight. We need to continue to get better and build on this, but we are excited about this win. I have never been part of a game like this. It’s so exciting to win like we did tonight.

Everything we worked for – every loss from last year, every meeting, everything – got wrapped into one moment tonight and it’s a special win.

ON THE SEASON AHEAD
We have a lot of guys returning from last season, so we just need to continue to build on this experience. We are going to face teams that are more talented than us, but we are going to be one of the more gritty teams this season. I think that showed tonight.

We were able to play a double overtime game and came away with a victory. The resiliency and experience from tonight’s game is invaluable. We have to continue to work as hard as we can, and put in the work on the field and in the weight room. We still have a long way to go. We just have to continue to get better each week.

The Bucs have an open date next Saturday and will enjoy two weeks to prepare for their return to the Southern Conference on Sept. 17 at Bristol Motor Speedway against Western Carolina. Kickoff for the “Bucs at Bristol” game is set for 1:30 p.m., and tickets are available by calling 423-BRISTOL.