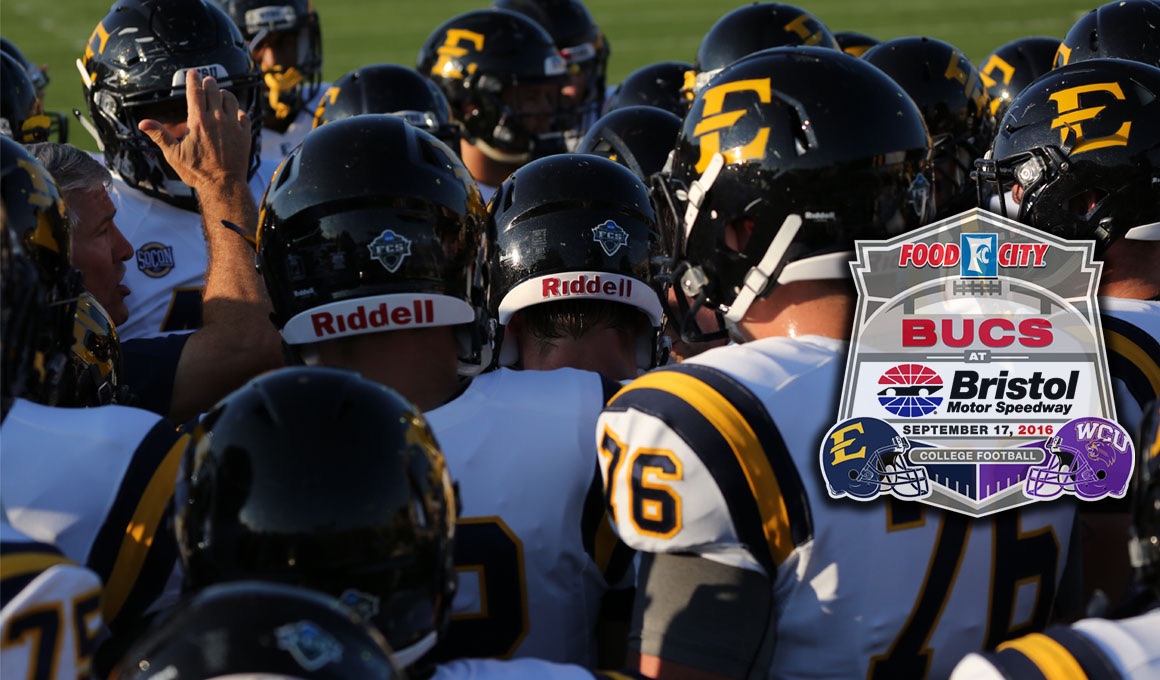 The streak will finally end on Saturday as ETSU rekindles its rivalry with Western Carolina in the Food City “Battle at Bristol” game, which kicks off at 1:30 p.m., at Bristol Motor Speedway.

Tickets for this historic SoCon opener are available and can be purchased by calling 423-BRISTOL, visiting BistolTix.com, at your local Food City store or on gameday at BMS.

The win, which was ETSU’s first Football Championship Subdivision victory since a 16-13 victory over The Citadel in the 2003 season finale, earned the Bucs FCS Team of the Week honors for the opening weekend of play.

Kennesaw State was receiving votes in the STATS FCS Top 25 poll entering the season, while the Blue and Gold were able to serve revenge following last year’s 56-16 setback in the 2015 opener.

Despite its 13-year hiatus from SoCon play, ETSU carries a two-game win streak into Saturday’s contest as the Bucs defeated Chattanooga (68-7) and The Citadel (16-13) in their final two conference games of the 2003 season.

Not only is this weekend’s game the first SoCon contest for the Bucs since Nov. 22, 2003, it also marks the #RoadtoFrisco FCS Game of the Week.

Western Carolina enters the weekend 1-1 after suffering a 52-7 loss at East Carolina in the season opener, while the Catamounts bounced back with a 44-14 win over Gardner-Webb last weekend in their home opener.

The Catamounts return SoCon Preseason Offensive Player of the Year in running back Detrez Newsome … Newsome rushed for 1,109 yards as a sophomore, averaging 5.8 yards per carry last season.

WCU - who had 10 players on the preseason all-conference list - was picked to finish fourth by the league coaches.

Overall, WCU returns 51 lettermen from a year ago (23 offense/24 defense/4 specialists) … The

ETSU’s last win in the series came in 2002 when the Bucs defeated WCU, 27-7 … Current Senior Associate Athletic Director/COO Scott Carter had 92 yards on 17 carries, while Allen Davis, Andrew Forester and Gerald Sensabaugh all had interceptions for the Blue and Gold … Sensabaugh – who had a pick-six – also recovered a fumble.

The last time ETSU played on Sept. 17 was back in 1994 when the Bucs defeated VMI, 31-21, in Johnson City … The win over the Keydets marked Mike Cavan’s 50th career victory … Wide receiver Jeff Johnson set the Buccaneer single-game record for receptions (16) and receiving yards (239) in the win … Johnson was one reception and 25 yards shy of breaking then the SoCon record … Johnson was named National I-AA Player of the Week for that performance … Quarterback Greg Ryan threw for 320 yards and two touchdowns … The 320 passing yards rank sixth all-time in single-game history … Wide receiver

Chris Beatty threw a touchdown pass to Johnson in the 10-point win … Brian Edwards also totaled 141 rushing yards on 16 carries and one touchdown in the win.

Fans can listen to the radio call on WXSM-AM 640 The Extreme Sports Monster or on 104.9 NASH Icon as “Voice of the Bucs” Jay Sandos will carry the play-by-play and Don Helman will be filling in for former Buccaneer quarterback Matt Wilhjelm as the color analyst. Jessica Larkin will be the sideline reporter.

In addition to following the Bucs on your mobile device and/or tablet with live audio and video, fans can get up to the minute stats by following the action via StatBroadcast. Fans can access live stats on their computers or mobile devices via BucsStats.com or by clicking here.

The Bucs remain in conference play as ETSU heads to Spartanburg, S.C., to take on Wofford next Saturday, Sept. 24 … Kickoff is set for 1:30 p.m., at Gibbs Stadium.