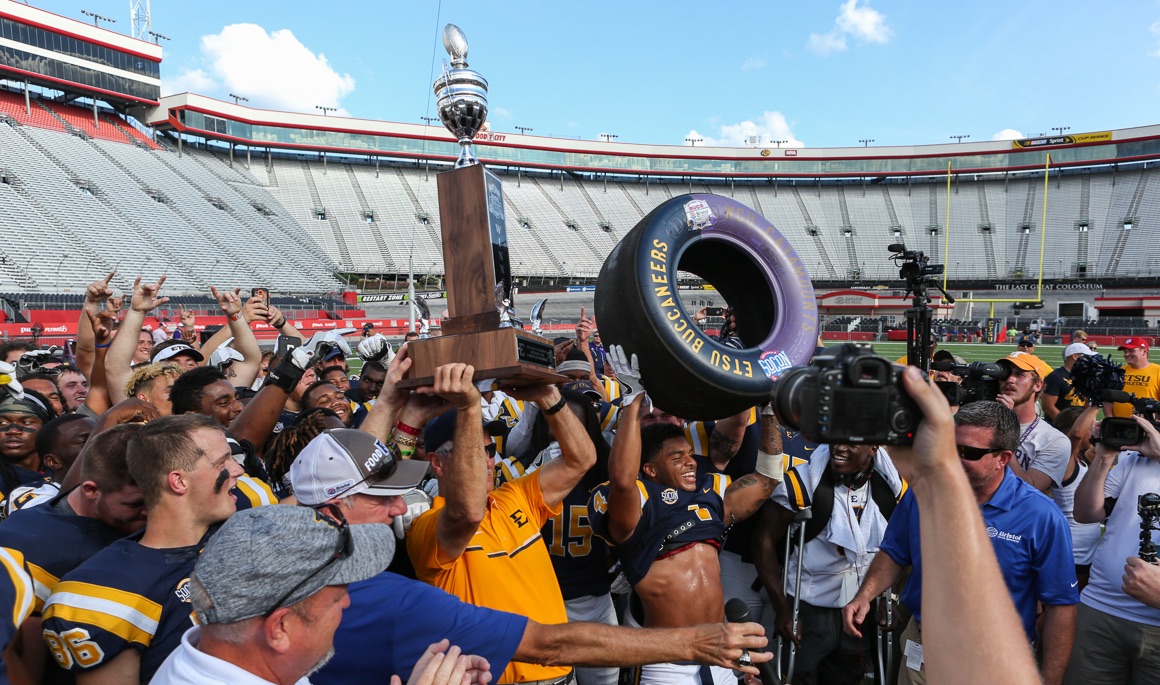 Record crowd of 13,863 watch ETSU rally from 18-point deficit for historic win in return to SoCon

BRISTOL, Tenn. (Sept. 17, 2016) – For the ETSU football team, simply playing in a historic game wasn’t enough. The Buccaneers wanted to win it ... and they did.

Thanks to an epic comeback, the Bucs overcame an 18-point, first-half deficit to score 24 unanswered points, taking the lead in the second half and defeating Western Carolina 34-31 Saturday afternoon in the Food City Bucs at Bristol game at Bristol Motor Speedway.

In the Bucs first Southern Conference game since 2003, an ETSU program-record crowd of 13,863 fans looked on as the Bucs improved to 2-0 on the season and 1-0 in league play. Meanwhile, WCU dropped to 1-2, 0-1. This marked the second straight time the Bucs took down a team who was receiving votes in the STATS FCS Top 25 poll.

The turning point of the game came as ETSU trailed 21-3 with two minutes left in the first half and Western Carolina was driving on offense. A 43-yard pass to the Catamounts’ Spearman Robinson took the ball to the ETSU 30-yard line, but as he was tackled, the Bucs’ Daren Ardis (Bradenton, Fla.) punched the ball loose and teammate Kevin Ferguson (Cincinnati, Ohio) recovered with 1:23 left before the intermission.

ETSU then took the ball 71 yards in eight plays to close the half with a touchdown to make it 21-10. Instead of trailing by as much as 25 points at 28-3, the Bucs were back in the ball game at 21-10 and outscored the Catamounts 31-10 the rest of the game to take the victory.

The Buccaneer Sports Network interviewed head coach Carl Torbush and quarterback Austin Herink following the game, along with first and second half audio highlights. Below is audio of their interviews.

The Bucs will return to action next week on the road at SoCon foe Wofford. Game time in Spartanburg, S.C., is set for 1:30 p.m.

For more on ETSU football throughout the 2016 season, visit ETSUBucs.com and click on the football link.