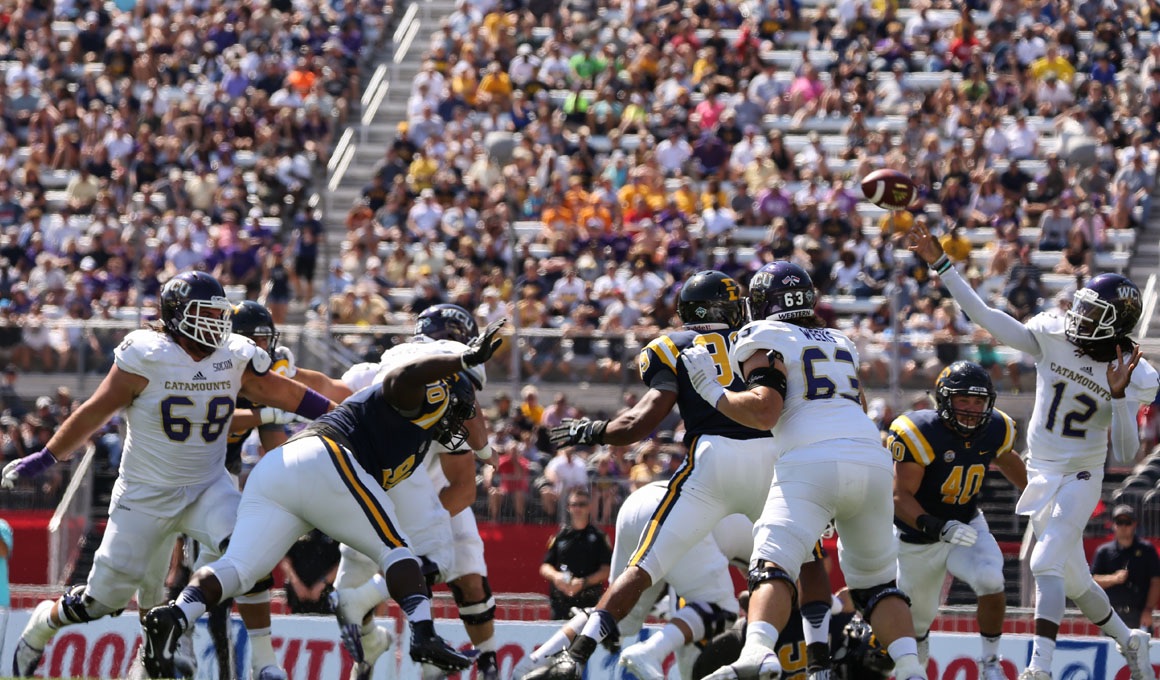 LEXINGTON, Va. (Oct. 7, 2016) – The ETSU football team returns to action this Saturday as the Bucs head to Lexington, Va., for a Southern Conference road game at VMI. Kickoff is set for 1:30 p.m. at Foster Stadium.

The Bucs split their first four games of the season and enter this weekend’s game at 2-2, 1-2 in SoCon play … ETSU opened the season with back-to-back wins over Kennesaw State and Western Carolina, before falling to Wofford and No. 3 Chattanooga.

ETSU is coming off a 37-7 home loss to No. 3 Chattanooga last weekend.

Junior defensive back Daren Ardis (Bradenton, Fla.) etched his name in the ETSU record book in last Saturday’s game vs. Chattanooga … Ardis’ 87-yard fumble return matched the longest in school history ... Ardis joins former Buccaneer Charles Stein at the top of that list ... Stein returned a fumble 87 yards in 1978 against Appalachian State … The turnover resulted in a touchdown as sophomore quarterback Nick Sexton (Seymour, Tenn.) connected on an 11-yard touchdown pass to Dalton Ponchillia (Nashville, Tenn.) … Ponchillia has posted at least one reception in all 15 games played in his ETSU career.

Sophomore Dylan Weigel (Pickerington, Ohio) – who leads the Bucs in tackles with 37 – recorded his 11th career game with double-digit tackles as he finished with a game-high 12 against Chattanooga.

As a team, ETSU ranks among the national FCS leaders in several categories … The

Al Cobb – a first team preseason Southern Conference selection – has passed for 1,000 yards and five touchdowns … He’s completing 65.2 percent of his passes – 107-for-164 and has thrown three interceptions.

Of his 107 completions, receivers Aaron Sanders (senior) and Dane Forlines (senior) and tight end Ryan Swingle (red-shirt junior) have accounted for 74 of them … Sanders leads the team in receptions (38) and receiving yards (309), while Forlines has 22 catches for 266 yards and Swingle has 14 catches for 147 yards and three touchdowns.

VMI’s last two games went to overtime – including the triple-overtime win at Bucknell two weeks ago.

ETSU leads the all-time series, 13-8, and the Bucs have won seven straight and nine of the last 10 meetings.

This marks the 12th game played in Lexington, and VMI holds a 6-5 advantage in the previous 11 games.

ETSU’s longest win streak in the series is its current seven-game streak, which started with a 38-0 win in 1996, while VMI’s longest run is a four-game stretch from 1979-85.

MORE ON THE VMI SERIES

In 1994, Jeff Johnson set ETSU single-game records for receptions and receiving yards in the 31-21 win over the Keydets in Johnson City … Johnson finished with 16 catches for 239 yards and three touchdowns in the win … Johnson’s three touchdowns are tied for second-most in single-game history … Quarterback Greg Ryan was 27-of-42 with 320 yards in that win – The 320 passing yards rank sixth, while the 42 pass attempts are tied for sixth and the 27 completions rank eighth in single-game history.

Wide receivers Greg Johnson and B.J. Adigun also had stellar games against the Keydets … Johnson finished with 10 receptions in the 38-0 win back in 1996, which is tied for eighth in ETSU history … Adigun – who was just inducted into the ETSU Hall of Fame in 2016 and was named SoCon Male Athlete of the Year in 1998 – recorded 172 receiving yards in the 17-7 win in Lexington in 1997 … The 172 receiving yards are the fifth-most by a Buccaneer player in single game history.

Quarterback Todd Wells’ 346 yards of total offense in the 38-3 win in 2000 ranks fourth all-time by a Buccaneer… Jim Kantowski’s 73-yard punt return in 1991 marked the seventh-longest return by a Buccaneer.

In addition to following the Bucs on your mobile device and/or tablet with live audio and video, fans can get up to the minute stats by following the action via StatBroadcast. Fans can access live stats on their computers or mobile devices via VMIKeydets.com or by clicking here.