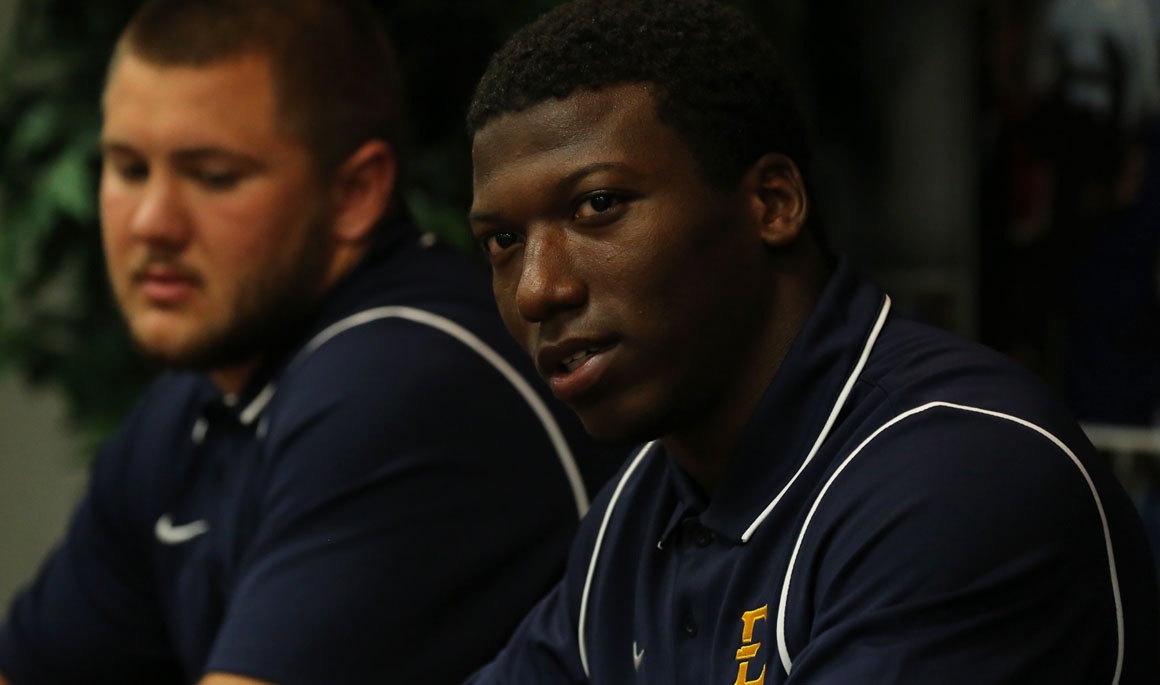 JOHNSON CITY, Tenn. (Oct. 24, 2016) – ETSU football held its weekly football press conference on Monday as the Bucs are gearing up for this weekend’s Southern Conference game at No. 5 The Citadel.

Below are comments from Coach Torbush, Weigel and Stinson.

ON THE WEST VIRGINIA WESLEYAN WIN

Obviously, this was a game that we needed to perform well in order to regain some confidence that we had probably lost over the last four, five weeks. I felt like our players really responded well. I think they went out there with a great bill of confidence and were the most physical team. I think we were able to do that on both sides of the ball. If you look at the numbers, we had 421 yards of offense (330 yards rushing), which any time you get over 300 rushing yards, you're going to win a bunch of ball games. That was a big plus for us. Defensively, we held them under 200 yards, which again, any time you gain over 400 on offense and you give up less than 200 on defense, there’s a really good chance to win. That's what we were able to do.

I think the biggest thing for the defense is we said going into the game that we couldn't let their running back have a good game. We held their team at 30 yards rushing. We did some good things there. We had eight tackles for loss and three quarterback sacks. We gave up a touchdown right before halftime, but I thought our players responded very well coming back to the second half.

Offensively, we won the possession time. We had the ball for 37 minutes, which any time you do that, you have a great chance to win. We always talk about field position. They started around their 22-yard line and we started on the 36, which was a big plus. We were able to run the ball extremely well and we did it with a lot of different options. Jajuan Stinson had over 100 yards rushing with one touchdown and he broke off a few nice runs, while Austin Herink gave us some good runs, which gave the defense some fits. Overall, it was a good win and we were able to give our guys some time off to rest over the weekend.

OVERALL STATEMENT ON THIS WEEKEND’S GAME AT THE CITADEL

We are getting ready to go into a hostile environment. I think it's going to be a lot like Kennesaw State and Wofford because both of those games were very loud. The Citadel is going to have a great crowd and most of them will be their fans, so it’s going to be the loudest environment we have faced. I have no doubt that our players are going to step up to the challenge and play up to the best of their ability.

We had a couple days off, which will hopefully heal us up both mentally and physically. We're coming off a win. What we need to do is have a great week of practice and go down to Charleston and play up to the best of our ability. On defense, we need to focus on not giving up the big play and make sure we tackle well. On offense, we need to make sure we can maintain the football by running the ball inside and outside the box and not get ourselves in a lot of third and long situations. If we get into those situations, they're tough as far as their pass rush goes.

We know this will be a challenge, but I think it's a great opportunity. It is another good situation to see where we are and where we need to go in the SoCon.

ON PREPARING FOR CITADEL’S RUN GAME

The one thing with Citadel is you can't pinpoint one guy and say, "This is the guy we have to stop.” We need to be prepared to stop the dive, which is the fullback, the quarterback because he runs the ball well, and you better stop the pitch back, which are the other two. That's the reason they've got four guys that all have rushed for about the same number of yards. None of them are big number guys, but all of them are consistent number guys. If you look at their passing game they don't throw it a bunch, but when they do, they take advantage of the big pass play.

ON CITADEL NOT BLOWING OUT A LOT OF ITS OPPONENTS

They're not concerned about beating somebody 58-0. They have the athletes to be able to do that, but they are focused on playing their style of football and winning the ballgame. They focus on not turning the ball over and winning the time of possession. They have done a tremendous job doing those two things and that is why they are undefeated. They're averaging right at 350 yards a game rushing. When you're able to do that and play the type of defense they've played, that tells you what type of football team they are.

WHAT DOES CITADEL DO DIFFERENTLY THAN KENNESAW STATE AND WOFFORD

The Citadel shows a little combination of both. Kennesaw was a majority of a true three-back set and they've got a lot of those principles, but then Wofford – who did a lot of the same things – got into a two-back set.

Now, we're getting ready to play The Citadel, which will basically do a lot of the same things principle-wise as both of those. The good thing is we've played two option teams. We've played two teams like we're getting to see this weekend against The Citadel. The bad thing is The Citadel has a pretty good idea of what we're going to try to line up in, but it's not a matter of lining up and out skilling somebody. It's a matter of playing discipline football. Our guys need to take care of their job, play physical and make sure we do a good job of tackling.

They're an athletic team. They do everything right. They have a lot of explosive players on offense. They have good running backs and quarterbacks that execute well, and they don't turn the ball over. For us on defense, we have to play physical and tackle well. We have to make sure we're doing our assignments every play.

THE KEY TO STOPPING CITADEL’S OPTION

I think the biggest key is being physical. We need to hit and push them back to stop their offense. They have a lot of guys who can run the ball, so making sure we come out, hit them and be physical is a big emphasis this week.

ON PLAYING ANOTHER OPTION TEAM

Being able to play Kennesaw State and Wofford gives us a good mark of what we need to do to be successful against this type of offense. We need to go out, execute and be physical.

ON PLAYING THE CITADEL THIS WEEKEND

ON THE TEAM GAINING CONFIDENCE FROM THURSDAY’S WIN

Getting that win last Thursday was big. We haven't been moving the ball that well on offense, but last week we moved it a lot. We ran for a lot of yards, so that should give us some confidence head into these next few weeks.