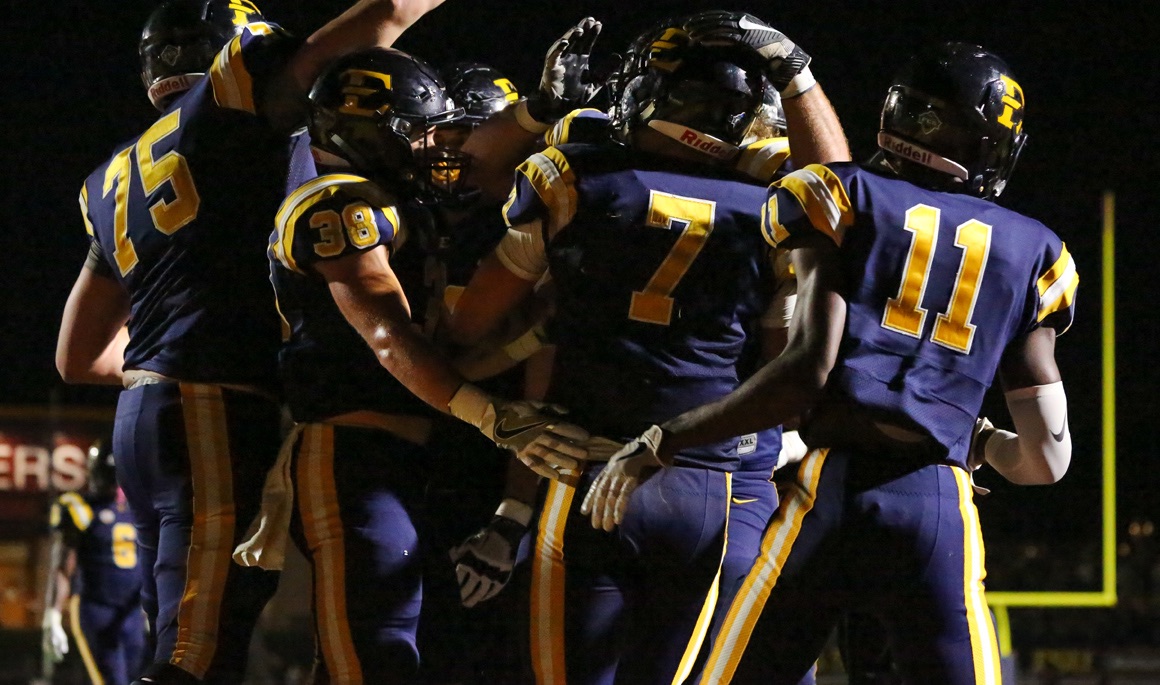 ETSU heads to Charleston to take on No. 5 The Citadel on Saturday
ETSU at #5 The Citadel | October 29, 2016
Related Links

CHARLESTON, S.C. (Oct. 28, 2016) – For the second time this month, the ETSU football team will face a team ranked in the top-five of the FCS Top-25 Poll, as the Buccaneers travel to Charleston to take on No. 5 The Citadel on Saturday afternoon. Kickoff is set for 2 p.m. at Johnson Hagood Stadium.

Defensively, the Blue and Gold recorded three sacks and held the Bobcats to 3-of-11 on third down chances … The Buccaneer defense also held WVWC to less than 200 yards on offense (199) … The Bobcats entered the night averaging 365.4 yards on offense and 164.6 rushing yards per game … The Blue and Gold held the Bobcats to 30 rushing yards, while senior running back Michael Anderson – the program’s all-time leading rusher – was held to 53 rushing yards on 12 carries and zero touchdowns … Anderson came into the game averaging 153.3 rushing yards per game and had eight rushing touchdowns … ETSU also finished with a season-high in sacks and recorded eight tackles for loss.

The Buccaneer defense held West Virginia Wesleyan scoreless in the second half, along with only 67 yards of total offense (60 passing/seven rushing) in the final 30 minutes … ETSU’s defense held the Bobcats to negative-19 yards in the fourth quarter (zero passing/-19 rushing).

The Buccaneers forced two turnovers (one on defense and one on special teams) and converted those miscues into 14 points … ETSU has now forced at least two turnovers in three games this season, while forcing at least one in five of its seven contests.

Dylan Weigel enters this weekend’s game needing nine tackles to record No. 200 for his career, while Jajuan Stinson is 47 rushing yards shy of 1,000 for his career … River Boruff (Sparta, Tenn.) – who registered his first collegiate forced fumble and fumble recovery in last weekend’s win – posted his 100th career tackle against West Virginia Wesleyan.

The Citadel is only one of two FCS teams who are undefeated on the season (Sam Houston State).

The Citadel has tied the program record for most Southern Conference wins in a two-year stretch, matching the 11 wins earned in 1991-92.

With the win at Wofford on Saturday, the Bulldogs have 16 victories since the start of the 2015 season, which is tied for the second-highest two-year win total in program history … The 24-21 overtime win at Wofford marked The Citadel’s first win in Spartanburg since 1998.

The Citadel has rushed for 2,476 total yards this season and recorded 2,860 yards of total offense … Overall, 87 percent of the Bulldogs’ offense has come via the run … The Citadel is converting on 49 percent (57/117) of its third down chances … 20 of the Bulldogs’ 23 offensive touchdowns have come via the run … Six different players have scored a rushing touchdown this season, while six different players have at least one run for over 35 yards.

Senior B-back Tyler Renew leads the team with 80.6 rushing yards per game, and he has yet to be tackled behind the line of scrimmage on 134 rushing attempts

Saturday marks the 25th all-time meeting between ETSU and The Citadel with the Bucs holding a 15-9 lead in the series.

ETSU won the last meeting, 16-13, when Jonathan Godfrey connected on a 22-yard game-winning field goal on Nov. 22, 2003, which marked the final football game for the Bucs until they reinstated the program in 2015.

MORE ON THE CITADEL SERIES

In the last meeting where Jonathan Godfrey’s game-winning field goal lifted ETSU to the 16-13 win to end the 2003 season, Gaven Varner rushed for a career-high 197 yards (tied for seventh all-time in ETSU single-game history) and quarterback Carl Meadows went 11-of-21 for 162 yards and one touchdown … The Buccaneer defense forced three turnovers (two interceptions/one fumble recovery), while limiting the Bulldogs to 253 yards of total offense (200 passing/53 rushing) … Montreal Harkley recorded both interceptions, while Andre Brooks had a 22-yard fumble return … ETSU started the final drive on its 12 yard line with 4:24 remaining … The Bucs went 74 yards in 10 plays to set up the Godfrey field goal with two seconds remaining … On that final drive, Varner carried the ball seven times for 31 yards on the drive, and Meadows connected with sophomore wideout Brian Matthews on a 51-yard pass that set up Godfrey’s 22-yard attempt … On the ensuing kickoff, Citadel’s Scooter Johnson fumbled and Andre Brooks recovered to seal the victory … Varner’s 37 rushing attempts in that game still holds as the ETSU single-game record.

In the 56-34 win over The Citadel in 1994, wide receiver Chris Beatty caught three touchdown passes and hauled in a pass on a two-point conversion ... Quarterback Greg Ryan earned SoCon Player of the Week honors after he tied the ETSU single-game record with five touchdown passes ... Beatty finished with 110 receiving yards, and Jeff Johnson had eight catches for 101 yards – that duo combined for 34 of ETSU’s 56 points ... The Buccaneer defense forced five fumbles (recovered two).

In 1983, Herman Jacobs rushed for 237 yards in the 45-0 victory in Johnson City … Jacobs’ rushing yards are the second-most by a Buccaneer in single-game history.

In addition to following the Bucs on your mobile device and/or tablet with live audio and video, fans can get up to the minute stats by following the action via Sidearm Sports. Fans can access live stats on their computers or mobile devices via CitadelSports.com or by clicking here.

The Bucs hit the road for the second straight week as ETSU heads to Macon, Ga. to take on Mercer on Saturday, Nov. 5 … Kickoff is set for 3 p.m. at Five Star Stadium.