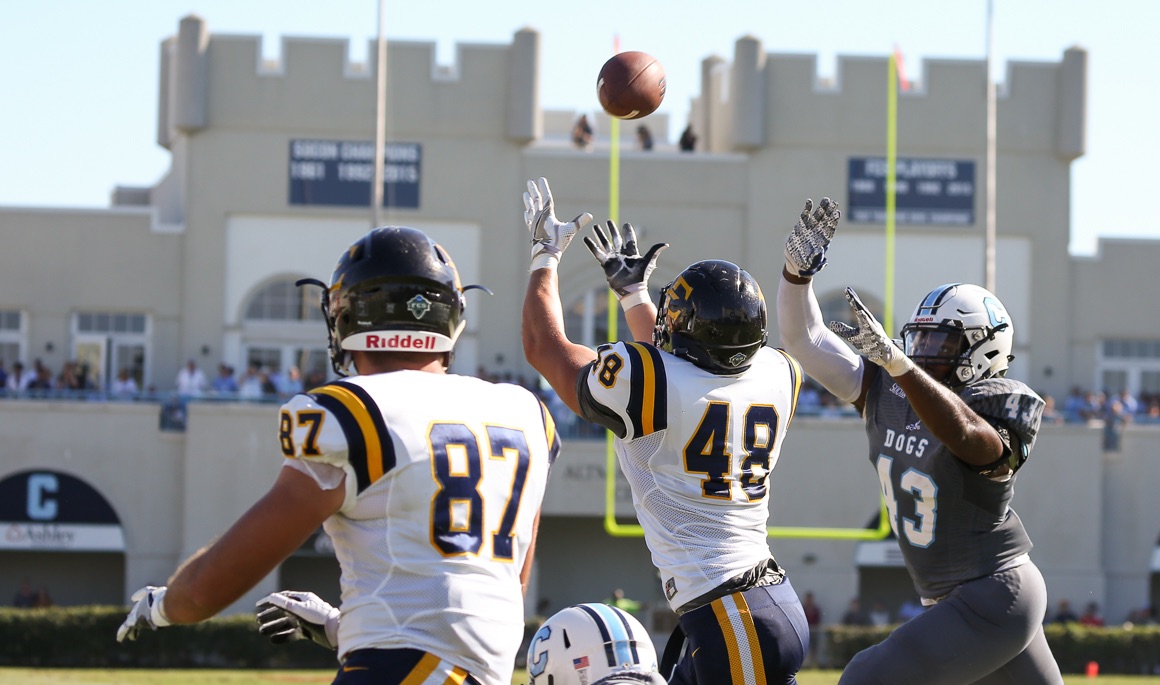 Redshirt freshman fullback Haddon Hill hauls in his first collegiate touchdown on Saturday.
Bucs fall on the road to No. 5 Citadel, 45-10
ETSU at #5 The Citadel | October 29, 2016
Related Links

CHARLESTON, S.C. (Oct. 29, 2016) – Despite showing signs of respectability throughout much of the first half, the ETSU football team could not overcome an early onslaught of scores and a second half offensive surge from No. 5 The Citadel, ultimately falling to one of the nation’s top Football Championship Subdivision teams 45-10 Saturday afternoon at Johnson Hagood Stadium.

In a matchup of longtime Southern Conference foes, the Bulldogs pulled away in the second half to improve to 8-0 for the first time in school history and move their SoCon record to an impressive 6-0 on the year. Meanwhile, the upstart Bucs dropped to 3-5, 1-5.

The Citadel rushed for 427 yards on the day and also showed a propensity for big plays through the air on way to posting 504 yards in total offense.

Meanwhile, the Bucs showed some fight in the first half when they pulled to within 14 points a 21-7, and then had another chance to make the deficit 14 later in the second quarter when a pass by sophomore quarterback Austin Herink (Cleveland, Tenn.) was intercepted at the Bulldogs’ goal line with ETSU trailing 28-7. Later, the Bucs forced a fumble on The Citadel’s first possession of the second half and capitalized on that turnover to cut the Bulldogs’ lead to 31-10.

However, unfortunately for the Bucs, any thoughts of a comeback were dashed as The Citadel finished the game with 14 unanswered points.

The Bucs will be back on the road next weekend, as they travel to Macon, Ga., to take on SoCon foe Mercer. Kickoff is set for 3 p.m.