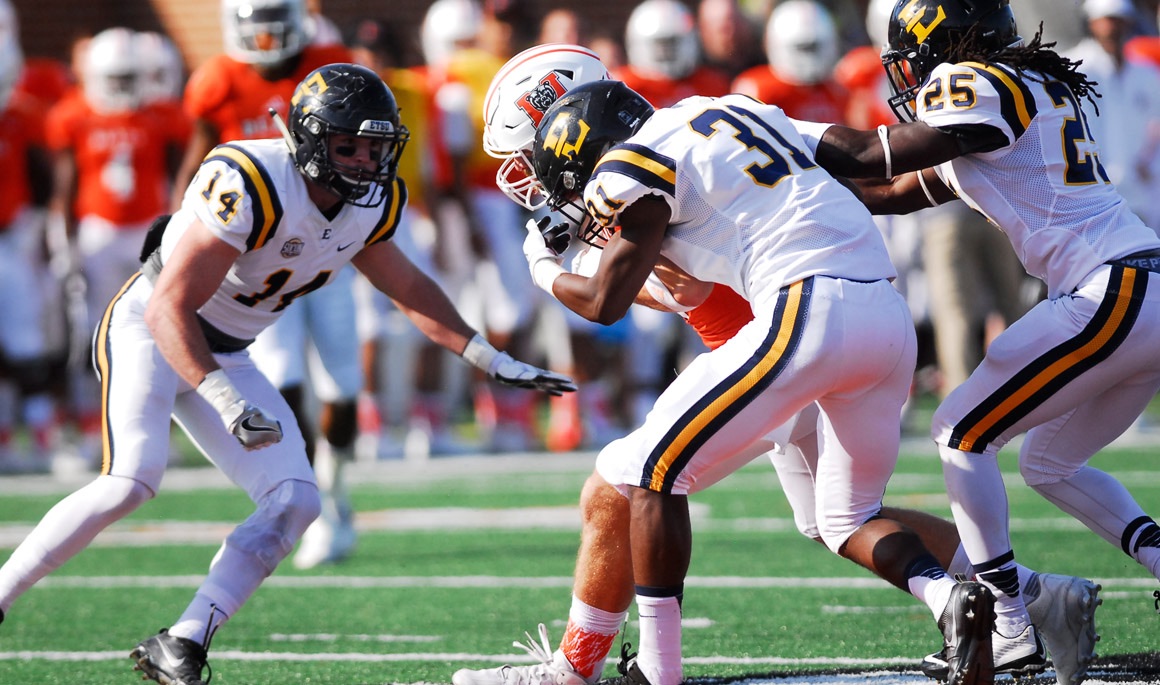 MACON, Ga. (Nov. 5, 2016) – Despite taking a 13-7 lead into the fourth quarter, the ETSU football team couldn’t hang on as Mercer struck for 14 unanswered points to rally for a 21-13 win over the Buccaneers on Saturday evening at Five Star Stadium.

After suffering a 52-0 loss to Mercer in a non-conference a year ago, the Blue and Gold showed a tremendous amount of fight and growth a year later. The Bucs went toe-to-toe with the Bears for all 60 minutes and took a big step forward in Southern Conference play.

Overall, ETSU out-gained the Bears, 372-367, and held Mercer to seven points in the first 45-plus minutes, but red-shirt senior John Russ – one of the top quarterbacks in the conference – went 6-of-9 for 65 yards and two touchdowns in the fourth quarter to ignite the comeback. The Bucs passed for 267 yards and rushed for 105, while the Bears ran for 195 yards and threw for 172.

Russ’ third touchdown came with five minutes remaining to put Mercer ahead by eight – and despite the Buccaneer offense going three-and-out on the ensuing possession – ETSU’s defense made another stop to give Austin Herink (Cleveland, Tenn.) and company one final chance to tie the game. After starting the drive at its own 10-yard line, Herink helped direct the offense to Mercer’s 32 before his pass to the end zone was intercepted by defensive back Eric Jackson with less than 10 seconds remaining. On the final pass play, Jeremy James tipped the pass - which was intended for Kobe Kelley (Knoxville, Tenn.) - then kicked it up in the air to allow for Jackson to get there for the interception.

ETSU’s defense forced a pair of fumble recoveries … The Bucs have forced at least one turnover in seven of their nine games this season, while the Blue and Gold have forced two turnovers in three straight games … Sophomore linebacker Austin Gatewood (Ooltewah, Tenn.) forced the first fumble and Dylan Weigel (Pickerington, Ohio) recovered the ball on a 19-yard run by John Russ … Russ also fumbled in the third quarter and sophomore defensive lineman Chris Bouyer (Rock Hill, S.C.) recovered the loose ball.

Weigel and fellow sophomore Trey Quillin (New Albany, Ohio) both tallied 11 tackles each, while graduate defensive back Ryan Powers (Jupiter, Fla.) finished with a game-high 12 … Weigel now has now recorded double-digit tackles in 15 of his first 20 games, while Quillin’s 11-tackle effort set a new career high … Powers posted his third double-digit tackle game of the season and moved his career total to six (three at ETSU/three at Stetson) … Gatewood and River Boruff (Sparta, Tenn.) ended with seven tackles each, while seven players accounted for ETSU’s six tackles for loss.

Drake Powell finished with a career-high 143 receiving yards and became the first Buccaneer player to have a 100-yard receiving game since Sept. 26, 2015 when Dalton Ponchillia had 117 against Emory & Henry … Powell’s 69-yard touchdown reception in the third quarter marked the first of his collegiate career, while it was also ETSU’s longest play since restarting football a year ago.

JJ Jerman made two of his three field goal attempts and extended his streak of consecutive PAT makes to 38 straight to start his career … Jerman made 32 and 33-yard attempts, but missed on a 19-yard try in the second quarter ... The Blue and Gold drove the ball 43 yards, but Herink was stopped at the 2-yard line after a 4-yard run on second down and Matt Thompson (Morristown, Tenn.) was stuffed at the one on his third down run; however, Jerman’s field goal try was wide left.

Eric Jackson led the Bears with 11 tackles and registered his first collegiate interception to end the game.

Saturday’s attendance was 10,913 on Mercer’s Homecoming.

ETSU returns home to host Cumberland on Saturday, Nov. 12 for Homecoming … Kickoff is set for 1 p.m. at Kermit Tipton Stadium.