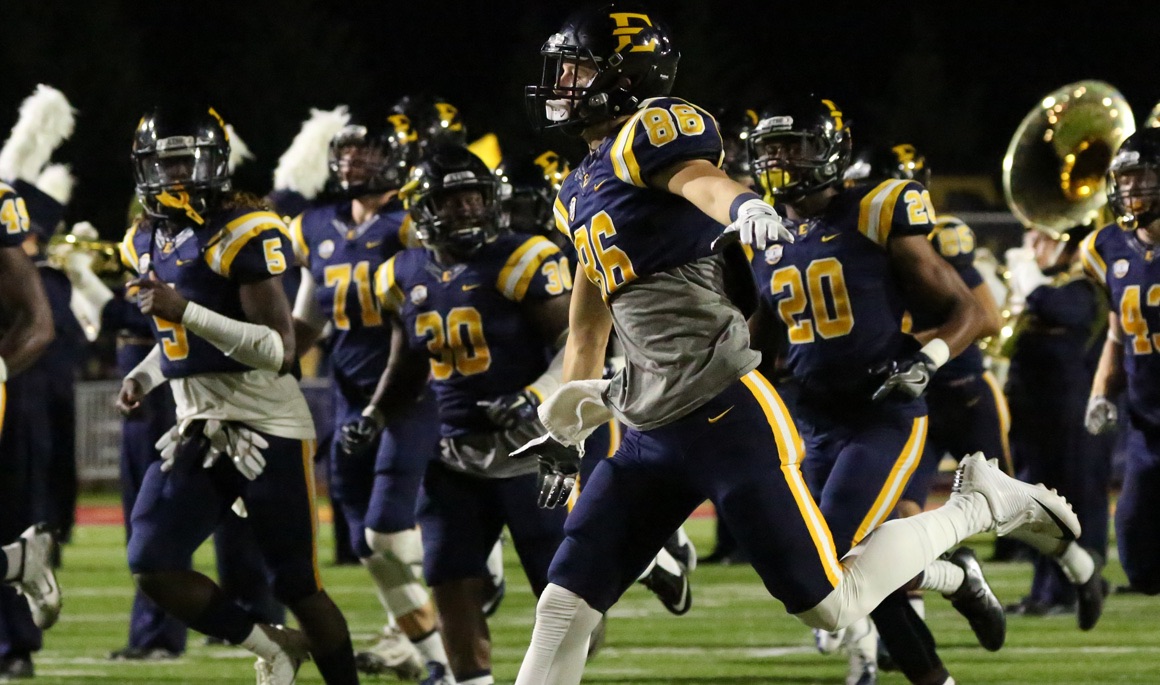 No. 1 – Game time is set for 1 pm. on Saturday, with the traditional Buc Walk set for 11:15 a.m. During the year, the Buc Walk will take place one hour and 45 minutes prior to game time. In addition, the Food City Zone – a family tailgating area with kids’ activities – will open at 9:30 a.m.

No. 2 – Parking areas around Kermit Tipton will open at 8 a.m. for tailgating, and gates to the stadium will open at approximately 11 a.m. During the year, gates to the stadium will open two hours prior to kick. Please make sure to have your designated parking pass visibly displayed to access lots. Paid parking is also available in Lots C and I, as well as in the Terrace lots in front of Science Hill High School.

No. 3 – Saturday’s game is Homecoming … To purchase tickets, call (423) 439-3878 or click here to purchase them online … Students can get their FREE ticket by visiting the second floor of the Culp Center, by reserving their ticket online here or showing up at the south gate entrance at Kermit Tipton Stadium.

Sophomore wide receiver Drake Powell (Clinton, Tenn.) has had a pair of break-out games the last two weeks … Over the two-week stretch, Powell has recorded 11 receptions for 213 yards and one touchdown … His touchdown reception came in last week’s game at Mercer, which was a 69-yard play … The 69 yards marked the longest play by the Bucs since restarting their program a year ago … Powell finished with career highs in receptions (8) and receiving yards (143) last week at Mercer, becoming just the second player to go over 100 receiving yards in a game since last season …The week prior, Powell had three receptions for 70 yards at The Citadel.

ETSU’s two common opponents from last year’s schedule to this season’s slate were Kennesaw State and Mercer … Last year, the Bucs lost by a combined score of 108-16 to the two programs (56-16 vs. KSU and 52-0 to Mercer), resulting in a 92-point differential … This season, ETSU is 1-1 against the two programs as the Bucs defeated Kennesaw State, 20-17 and fell to Mercer, 21-13, resulting in a five-point differential in the two games … In the two years, ETSU went from being negative-92 to negative-5 against the two foes, resulting in an 87-point turnaround in the two games.

ETSU’s defense forced a pair of fumble recoveries last Saturday at Mercer … The Bucs have forced at least one turnover in seven of their nine games this season, while the Blue and Gold have forced two turnovers in three straight games … ETSU’s defense ranks 13th among FCS teams in fumbles recovered (10).

The Blue and Gold have scored on 22 of their 24 trips (91.7 percent) inside the red zone this season.

The Bucs announced on Wednesday ETSU will play Limestone College to open the 2017 season in its new, on-campus stadium.

Cumberland has won four of its last six games and sit 5-5 on the season … The Phoenix are coming off a 31-28 loss at Faulkner this past Saturday, but the week prior, Cumberland defeated then-No. 19 Bethel, 62-55 in overtime.

The Phoenix defense have generated 11 turnovers (five INTs/six fumble recoveries) and have scored 41 points off those miscues this season … On the flip side, Cumberland’s offense has also turned the ball over 11 times (four INTs/seven fumbles).

Cumberland’s defense has totaled 27 sacks for a loss of negative-169 yards, while the Phoenix offensive line have allowed 13 sacks.

The Phoenix have committed 78 penalties for 642 yards this season.

Red-shirt senior quarterback Justin Snyder – who played at Science Hill – is 81-for-140 with 1149 yards passing and seven touchdowns (two INTs).

Cumberland plays in the Mid-South Conference (NAIA) and is located in Lebanon, Tenn.

Cumberland is coached by Donnie Suber, whose son Bryce is a red-shirt freshman defensive back on ETSU’s roster … Suber is in his fourth year at the helm at Cumberland.

ETSU leads the all-time series, 6-1 … Saturday marks the first meeting between the two programs since a 25-0 Buccaneer win back in 1947 … The Bucs are 5-1 against the Phoenix in games played in Johnson City, while Cumberland’s only win in the series was a 26-0 victory in 1935.

Saturday’s game will be streamed live on SoCon Digital Network … The broadcast will begin 15 minutes prior to kickoff … Click here to access the video stream.

In addition to following the Bucs on your mobile device and/or tablet with live audio and video, fans can get up to the minute stats by following the action via StatBroadcast. Fans can access live stats on their computers or mobile devices via ETSUBucs.com or by clicking here.