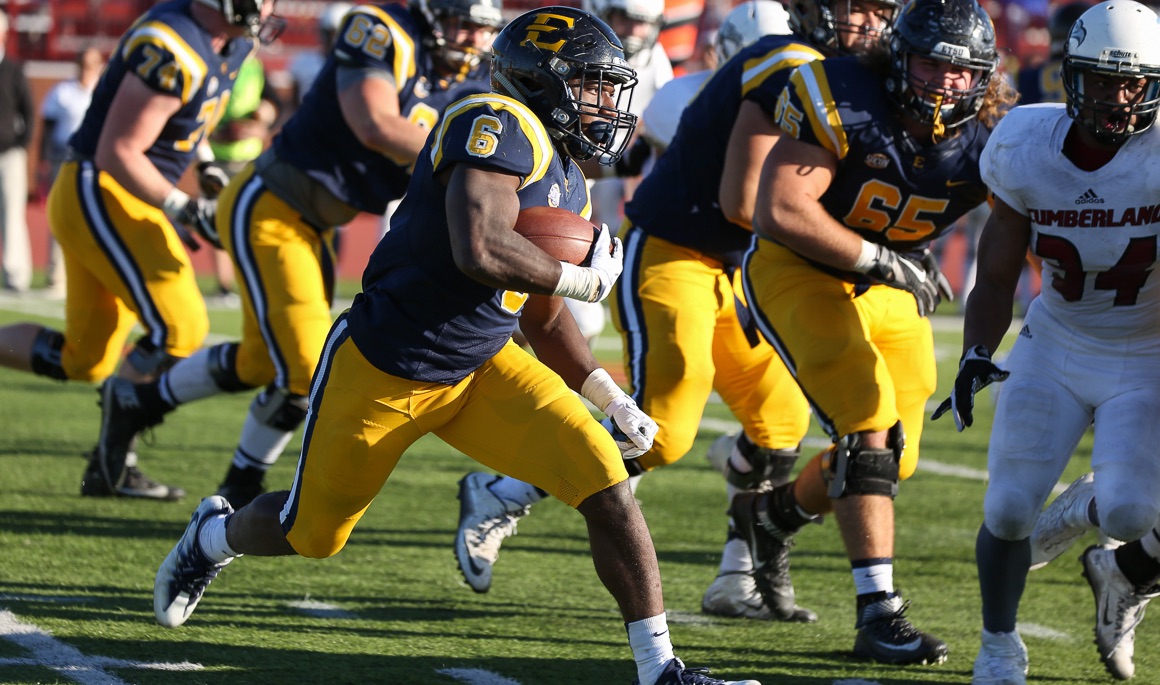 JOHNSON CITY, Tenn. (Nov. 12, 2016) – At first, it appeared that offense would determine the winner of Saturday’s matchup between ETSU’s football team and Cumberland University. In the end, it was the Buccaneers’ defense that made all the difference.

After watching both teams combine to score 39 points and rack up 484 yards in total offense in the first half, the ETSU defense dug in and did not allow a point in the second half, stifling the Phoenix offensive unit time after time and preserving a 23-16 Homecoming win in front of 6,735 fans at Kermit Tipton Stadium.

With the non-conference victory, the Bucs improved to 4-6 on the year and have doubled their win total from the program’s inaugural 2015-16 season. Meanwhile, Cumberland ended its season at 5-6.

While the Bucs ultimately got the win, Cumberland took the early lead and twice held the advantage at 7-0 and 14-7 in the first half. However, ETSU’s offense answered each time, led by three scores from sophomore tailback Jajuan Stinson (Knoxville, Tenn.) and strong quarterback play from sophomore Austin Herink (Cleveland, Tenn.). Ultimately, the Bucs’ 23-16 halftime lead would hold up for the entirety of the game.

In the second half, the Bucs twice held the Cumberland offense on fourth down and also forced a missed 28-field goal early in the fourth quarter. The biggest stop of the game came after the Phoenix had first-and-goal at the ETSU 4-yard line midway through the third quarter. The Bucs stopped two running plays and then Paul Hunter (Denton, Texas) and Ryan Powers (Jupiter, Fla.) successfully defended two pass attempts into the end zone to avoid the scoring threat. Overall, the Buccaneer defense limited Cumberland to 133 total yards of offense in the second half (11 rushing yards/122 passing yards), while also holding the Phoenix to 1-of-7 on third and 1-of-3 on fourth down.

For the game, Stinson finished with 143 all-purpose yards, including 29 yards receiving and a game-high 114 on the ground. Meanwhile, Herink was 11-of-20 through the air for 163 yards and rushed seven times for 42 yards.

The Bucs will wrap up their 2016 season at home next week when they host No. 21 Samford at Kermit Tipton Stadium. Kickoff Saturday is set for 3:30 p.m.