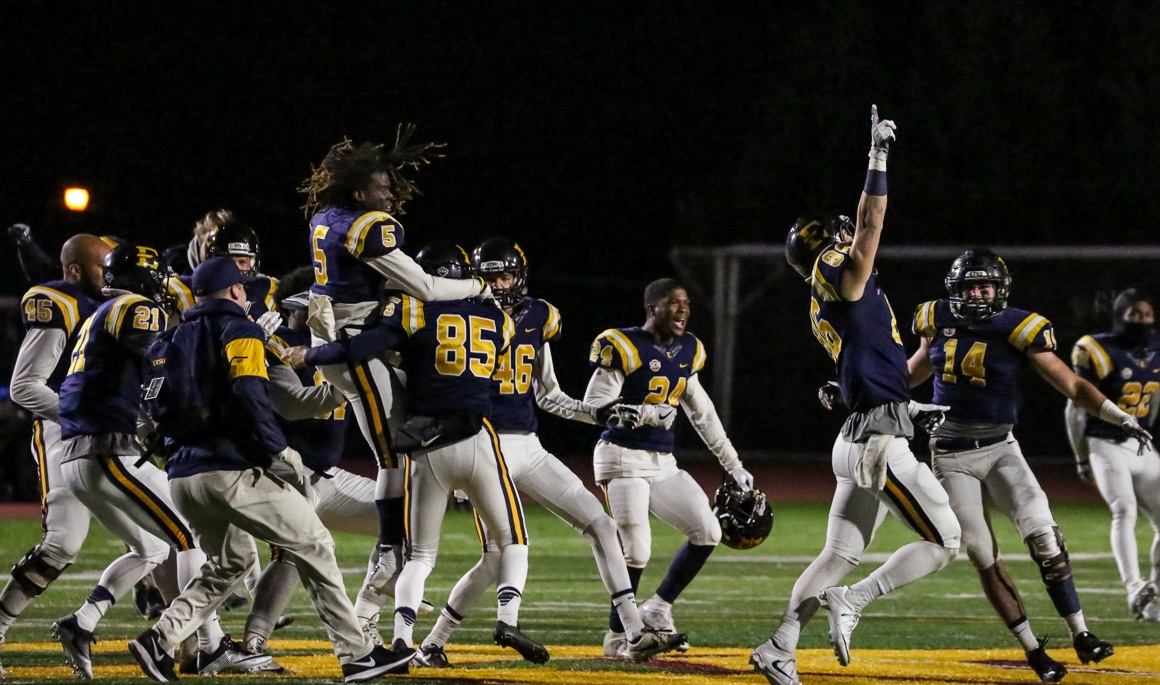 The Bucs celebrate after knocking off No. 18 Samford on Saturday night at Kermit Tipton Stadium.
Defense, Jerman’s kick lift Bucs past No. 18 Samford
#18 Samford at ETSU | November 19, 2016
Related Links

Just as he gave the Buccaneers a dramatic season-opening victory over Kennesaw State with a field goal in overtime back in September, sophomore placekicker JJ Jerman (Seymour, Tenn.) came through again with a game-winning kick as time expired, lifting the Bucs past 18th-ranked Samford 15-14 in Southern Conference play on Senior Day Saturday at Kermit Tipton Stadium. It was the Bucs first win over a ranked opponent since dropping No. 1 Georgia Southern 19-16 back on Oct. 27, 2001, inside the ETSU/MSHA Athletic Center.

The Bucs, who fell behind 14-3 and scored 12 unanswered points to pick up the win, capped their second season since returning to the gridiron in 2015 with a 5-6 overall record (2-6 in the SoCon) and a pair of wins over teams that either are or were eventually ranked in the Top 25, as Kennesaw State is currently No. 22 in the nation. Meanwhile, Samford (7-4, 5-3) likely falls out of contention for a possible spot in the Football Championship Subdivision playoffs with the loss.

Facing statistically the best offense in the SoCon, the ETSU defense came to play on this night and kept the Bucs in the game throughout. Forcing a fumble and allowing just one touchdown in the first half, the Bucs went to the halftime locker room down just 7-3. In addition, the ETSU offense did its part by putting together time-consuming drives and keeping the Bulldogs offense off the field. In all, the Bucs won time of possession in the first half, holding the ball for 18:41, compared to 11:19 for Samford.

That defensive effort continued in the second half, as did the Bucs’ offensive patience and advantage in time of possession. By the end of the game, ETSU possessed the ball for over 41 minutes of game play – a new single-game record for the program – compared to just 18 minutes for the Bulldogs. Even more impressive, Samford had entered the game averaging 38.3 points and 469.3 yards a game offensively. On this night, they were held to just 14 points and 265 yards.

Individually, ETSU sophomore linebacker Dylan Weigel (Pickerington, Ohio) led the way for the defense with 10 tackles, while also forcing a Samford fumble. On the offensive side of the ball, sophomore quarterback Austin Herink (Cleveland, Tenn.) put together a strong performance, going 18-of-26 through the air for 238 and a touchdown, while also rushing for another 23 yards. For the night, Herink found seven different receivers, with juniors Dalton Ponchillia (Nashville, Tenn.) and Vincent Lowe (Chesapeake, Va.), and sophomore Drake Powell (Clinton, Tenn.) collecting four receptions apiece.

For more on ETSU football, visit ETSUBucs.com and click on the football link.