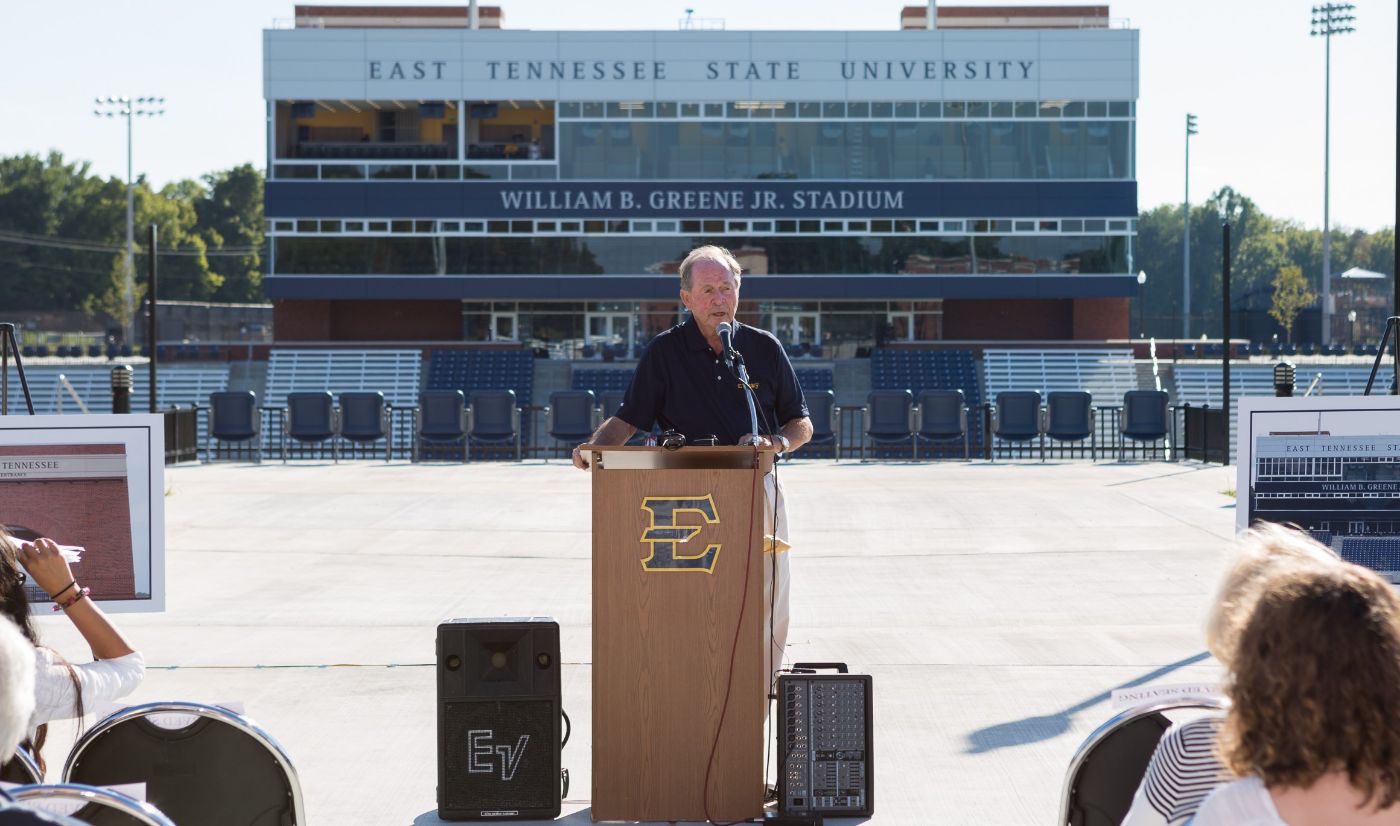 JOHNSON CITY, Tenn. (Aug. 24, 2017) – During a called meeting today, the Board of Trustees for East Tennessee State University approved the naming of the William B. Greene, Jr. Stadium, which is located on the southwest corner of campus.

According to ETSU President Dr. Brian Noland, this naming recognizes the longstanding and generous support of William B. Greene, Jr., Dr. Linda Latimer and the Bank of Tennessee.  For over four decades, Greene has been a tireless champion for supporting students and student athletes through scholarships as well as enhancing facilities.  The Warren-Greene Golf Center at ETSU, which opened in 2004, was dedicated in honor of Greene in recognition of his support of the ETSU golf program.

“Bill Greene is a longtime supporter of East Tennessee State University,” Noland said.  “He is a keen businessman with a true vision for the success of our students, our athletics programs and this university as a whole. For years, he has demonstrated a strong commitment to that vision through his generous contributions of both time and funding.  We are extremely grateful to have Mr. Greene as a friend of our institution, and it is only fitting that his name will adorn the football stadium – a facility here at ETSU that symbolizes not only Buccaneer spirit and ETSU pride, but also serves as a venue for community engagement and regional camaraderie.”

Construction for the new football stadium began in 2015.  This phase of the project was built at a cost of approximately $26 million and will feature a total seating capacity of 7,694. The east side entry arch, the west side tower, the south end videoboard and the north end grass berm are just some of the features that will give the new facility a unique feel for fans.

The stadium will open on Sept. 2 when the Bucs take on Limestone at 7 p.m.

"All of us at ETSU would like to say a tremendous thank you to Bill Greene,” said head football coach Carl Torbush.  “Mr. Greene has invested much of his time, energy and resources into our community and university. Our team is proud, excited and honored to be the first to play inside William B. Greene, Jr. Stadium.”

The stadium was designed by McCarty Holsaple McCarty and was built by BurWil Construction Company.

“East Tennessee State University, under the leadership of Dr. Brian Noland, is rapidly becoming one of the premier universities in the South,” Greene said.  “Dr. Noland has raised the bar, and now it is time for us to raise the bar.  That is exactly what we set out to do.  There is no looking back now.”