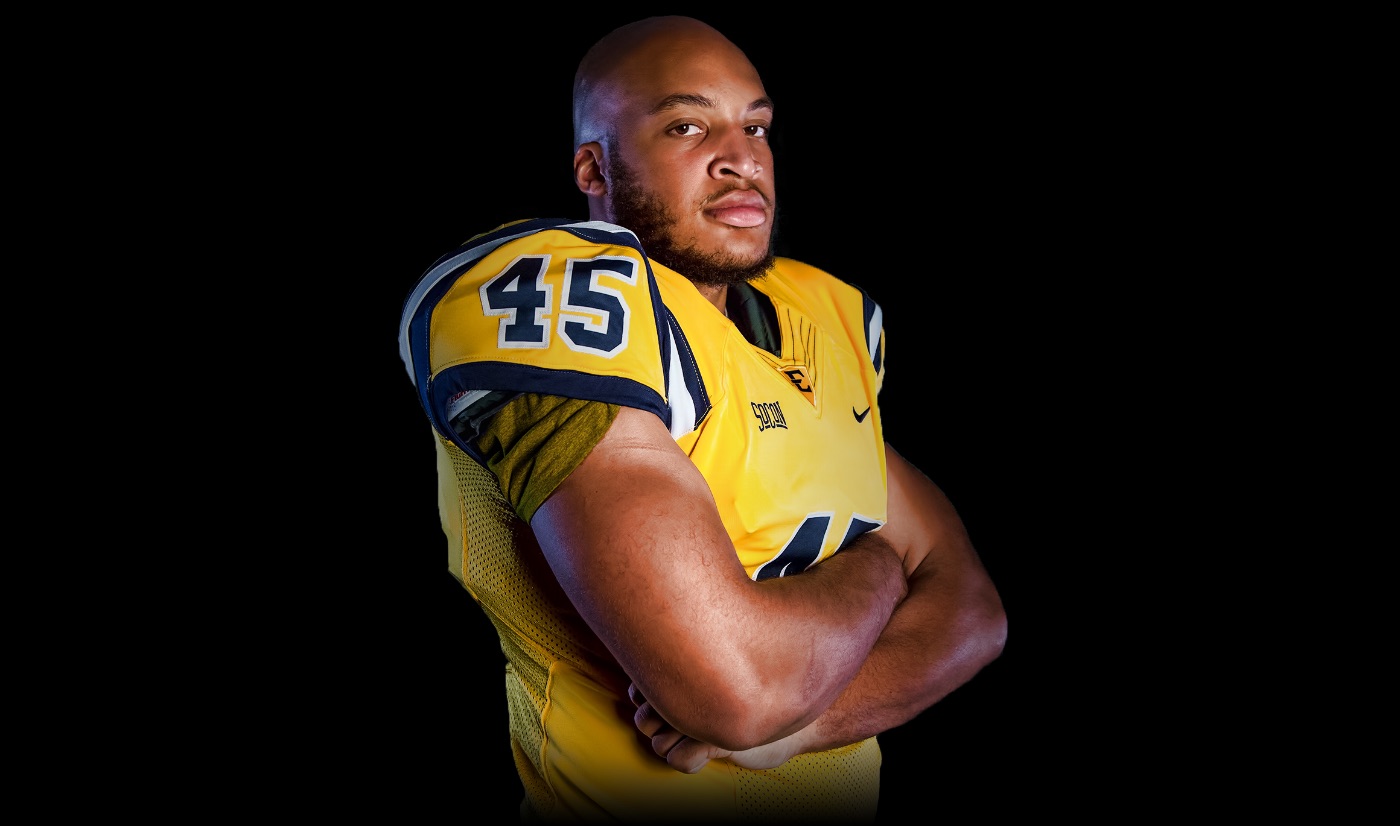 East Tennessee State University and Johnson City were complete unknowns for Nasir Player, but a phone call from Mike O’Cain back in 2014 quickly changed everything.

Player was senior at Ridge View High School in South Carolina when Coach O’Cain called him in the fall of 2014 to let him know what was taking shape at ETSU. The Buccaneers had their first recruiting class on campus, but all the players were redshirting so they could prepare for the start of football in 2015.

“I remember getting a phone call from Coach O’Cain during my senior season (in high school) and he said he was from East Tennessee State University,” said Player, a 6-foot, 6-inch 247-pound defensive end. “I never heard of ETSU or Johnson City before that phone call, but once he told me about the team, I liked the idea of joining a new program. That really attracted me and got me to come to ETSU.”

“It was the fall of 2014 and we had our first recruiting class on campus when I went by Ridge View,” said O’Cain, the Bucs’ offensive coordinator/quarterbacks coach. “I knew Coach Jennings really, really well, and he said ‘I have a player you need to look at.’ That player was Nasir. I came back and looked at his video highlights, and I really liked what I saw. He has great size and plays extremely hard on every snap.”

After making a visit to Johnson City to see the campus and meet the coaching staff, Player liked the vision about being able play in a new, on-campus stadium.

“That’s why I came here,” said Player, when asked about opening up William B. Greene, Jr. Stadium on September 2 against Limestone. “During my recruiting visit, they (the coaches) talked to me about the stadium and showed me pictures of what it was going to look like. I was excited to see the vision and be given the opportunity to be part of history.”

Player is used to making adjustments in his life. He and his family moved from Fayetteville, N.C. to Germany to Columbia, S.C., when he was younger, and he had to adjust again when it was time to come on campus in the summer of 2015.

“My parents were in the military so we moved to Germany when I was seven,” said Player. “They didn’t have tackle football over there so I played flag football, but once we moved back to the United States, I started playing tackle football in eighth grade.

“Back then I was playing quarterback, but in high school I switched to defense and it has stuck with me ever since. I really wanted to play quarterback, but my high school coach saw my body and he said I was either going to play defensive end or tight end. All it took was playing defensive end one time and I really loved it. I like to hit people.”

Hitting people is an understatement. Player recorded 88 tackles (13 tackles for loss) and nine sacks his senior season in high school, while also playing one season of lacrosse for the Blazers.

Once at ETSU, Players’ passion for laying a hit on the opposition was put on the backburner. With the Bucs playing the 2015 season as a FCS Independent, Player and a handful of teammates in his signing class were redshirted, so they could make more of an impact once the Blue and Gold transitioned into playing a full SoCon schedule a year later.

“It was hard when I first got up here,” said Player. “I was trying to figure out college life. It was the first time being alone, out of the house and far away from home. I was really mad when the coaching staff first told me I was going to redshirt. I was really mad, because I just wanted to play football and play in that first game (against Kennesaw State in 2015).”

With time to reflect, Player was happy with the coaches’ decision. The Buccaneer standout was able to work with head strength and conditioning coach Al Johnson, while also taking part in practice the entire year.

“When I look back on it, I am glad it happened that way. I gained 20 pounds during my redshirt year,” added Player. “I was able to practice every day and get better, and I wasn’t losing any eligibility. It was a good idea to redshirt that season.”

Despite not being able to make an impact on gamedays in 2015, Players’ presence on the practice field was paying dividends.

“The better players we can recruit and bring in here, the better it makes our football team,” said O’Cain. “Nasir was able to do that during his redshirt year, as he never took a snap off during our scout. He practices extremely hard and has a strong motor. I think it frustrates our offensive line at times, because there is never a play off for our tackles. They have to battle Nasir on every snap, but that’s what makes us a better football team. We are going to see the best week-in-and-week-out in the SoCon, and Nasir helps test our offense everyday in practice.”

In 2016, with his redshirt year over, Player was ready to showcase his talents to the Buccaneer faithful. The Columbia, S.C. native wasted little time, as he started his first collegiate game and totaled a season-high eight solo tackles (two TFL) and one sack in the Bucs’ thrilling 20-17 double-overtime win at Kennesaw State. Overall, Player played in nine games last season with seven starts, en route to posting 27 tackles (5.5 tackles for loss), one sack, one quarterback hurry and one pass break up. Player ended up being one of three Bucs – who redshirted the 2015 season – to earn Southern Conference all-freshman team honors.

Played said he will never forget his first collegiate game.

“I’ll always remember that game at Kennesaw State. I just remember when we pulled up to the stadium; I had my headphones on and was listening to music. I was sitting there chilling and when we got to the stadium I started smiling. I was happy and laughing the entire time. Some people get serious before a game and won’t talk, but I was out there talking and soaking in the experience. It was my first collegiate game, so I was so happy and grateful to be given the opportunity to play the sport I love.”

As he enters his third year in the program, Player feels comfortable and is ready to help his team succeed both on and off the field.

Player has grown into a leader and his personality has a lot to do with it.

“The coaches have been telling me I have one of those personalities that people are going to follow and listen to me,” Player said. “You can use it one of two ways – positively or negatively. With so many young players on our team, I know it’s important to be a positive role model and I have followed the advice of my coaches. I understand what they (the coaches) are saying now and realize that people are going to listen to what I have to say regardless of whether it’s positive or negative. I have started channeling positive energy to make a stronger impact on our team.”

“It’s hard to say a guy who Nasir’s size being immature, but he was still young and trying to figure things out when he first came on campus,” said O’Cain. “But to go to the scout team, fight and battle for the entire 2015 season, and know you are not going to play is extremely difficult. That whole process forced Nasir to mature. Overall, he has improved and gotten so much better. That’s what we want to do as a staff. Obviously, we want to win football games. But the most important thing is to help these young men graduate, and hopefully when they leave they are better men from when they arrived. You can already see that with Nasir. He has matured. He’s a better young man today than he was yesterday and hopefully in the next day you see more improvement.”

Last season, Player knew his emotions got the better of him at times and that is why he is working being more positive.

“I was really frustrated a lot last year. I feel if you’re an emotional wreck, then you can’t focus on what you are supposed to do. I know there were a couple of games when I was out there mad and wasn’t thinking straight. I realized that didn’t help the situation, so now I am focusing on keeping my head on straight and making sure I am doing my job.

“I have to let myself know it’s just a game and I can’t pay attention to the things I have no control over. There are some things that are not going to go our way – whether it’s not getting a call we wanted or not making a play – so I just have to focus on my job and do what I can to help the team win.”

One thing is for certain, Player and his Buccaneer teammates want to get the win Saturday night when they open up their new stadium against Limestone.

“I am really excited to get in there and play that first game,” Player said. “It’s a place we can finally call home. This stadium is not only for us, but it’s big part of our campus and community. I can’t wait to see it packed for that first game.”