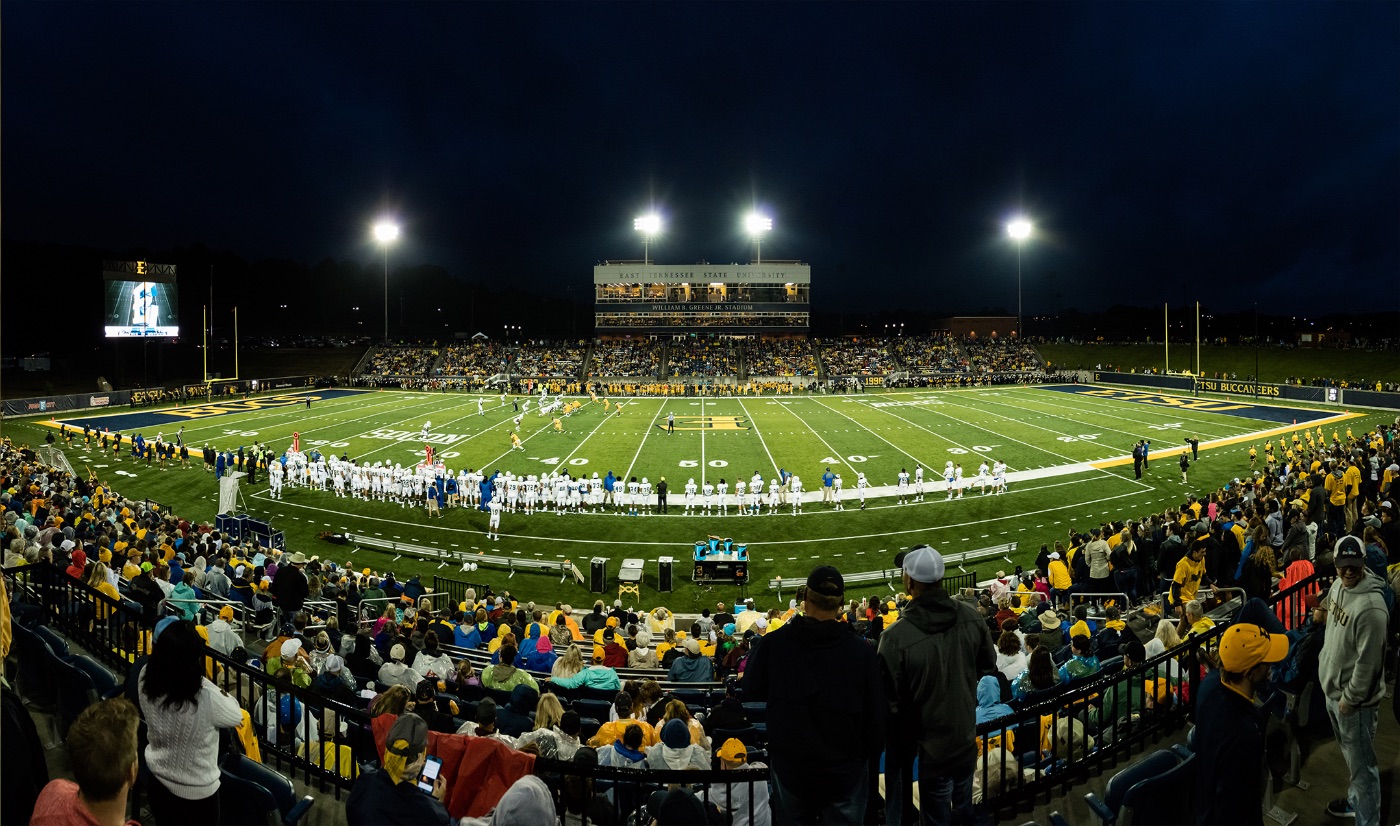 A sold out crowd was treated to a 31-10 win by the ETSU football team on Saturday night at William B. Greene, Jr. Stadium.
Bucs open Greene Stadium in style with 31-10 victory
Limestone at ETSU | September 02, 2017
Related Links

JOHNSON CITY, Tenn. (Sept. 2, 2017) – A sold out crowd was treated to a triumphant return to campus in the inaugural game at William B. Greene, Jr. Stadium on Saturday night, as the ETSU football team opened its 2017 season with a historic 31-10 win over Limestone College.

With 9,530 fans looking on, the Buccaneers played their first game on the ETSU campus since Nov. 22, 2003 and their first game outdoors on campus since Nov. 25, 1972. The moment was not lost on junior quarterback Austin Herink (Cleveland), who played an inspired game by completing his first 15 passes of the night and throwing for 239 yards in all, including three touchdowns.

The Bucs (1-0) now brace for a matchup with defending Football Championship Subdivision national champion and No. 1-ranked James Madison next Saturday at 6 p.m. in Harrisonburg, Va., The Dukes will enter the game coming off a win as well, having defeated Football Bowl Subdivision opponent East Carolina, 34-14, on Saturday. Meanwhile, Limestone heads home with a 0-1 record following the loss in Johnson City.

Along with Herink, the Bucs got a game high 88 yards rushing and a score from junior tailback Jajuan Stinson (Knoxville), while senior wide receiver Vincent Lowe had a game high five receptions for 48 yards and a touchdown. Along with Lowe, fellow wide outs Anthony Spagnoletti (Bealeton, Va.) and Andrew Heyward (Powder Springs, Ga.) each collected touchdown catches.

On the defensive side of the ball, sophomore defensive lineman Nasir Player (Columbia, S.C.) had a team and career high 10 tackles, while junior linebacker Dylan Weigel (Pickerington, Ohio) had eight stops. Senior defensive back Paul Hunter (Denton, Texas) also had a strong game with six tackles and an interception.

The Bucs outgained the Saints 379 to 222 and posted 20 first downs compared to just 13 for Limestone. For Limestone, a bright spot was quarterback Ivan Corbin, Jr., who finished with 80 yards rushing and the Saints’ lone scoring run.

NIGHT OF FIRSTS AT GREENE STADIUM

Austin Herink tied a career high with three touchdown passes, as he has now accomplished the feat three times in his career … Herink also set a new single-game program record by completing 15 straight passes to start a game … The redshirt junior quarterback was 13-for-13 with 180 yards and two touchdowns in the first half.

Nasir Player finished with his first double-digit tackle game of his career after finishing with 10 tackles.

Following Hunter’s interception, the Bucs have now forced at least one turnover in six straight games, while accomplishing the feat in 16 of their last 19 contests.

JJ Jerman has made nine of his last 11 field goal attempts, while his previous career long was a 46-yard make, which came in the 2015 season opener against Kennesaw State (Sept. 3) … Jerman has now made 21 career field goals placing him fifth all-time in program history … The preseason all-SoCon kicker is 44-for-45 in career PATs, making Jerman three shy of passing Ron Harrold (1968-70) for seventh all-time.