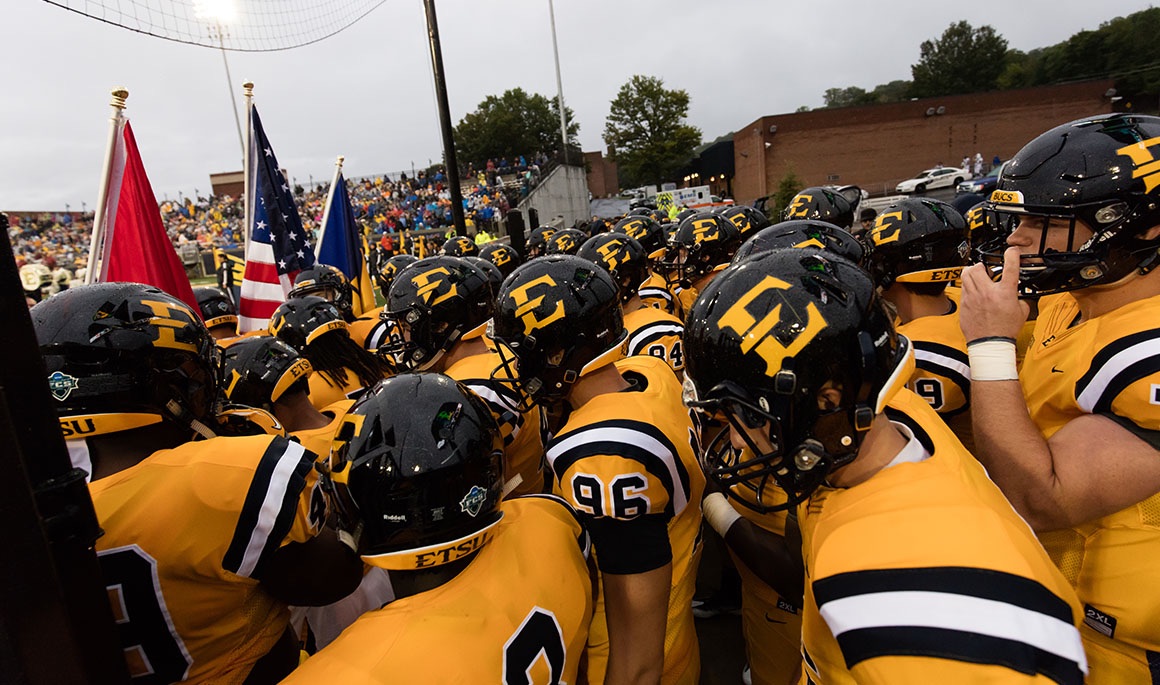 HARRISONBURG, Va. (Sept. 8, 2017) – For just the fifth time in program history and first since 2001, the ETSU football team is set to take on the top-ranked team in the country as the Buccaneers face No. 1 and reigning FCS champion James Madison on Saturday night. Kickoff is set for 6 p.m. at Bridgeforth Stadium.

ETSU VS. NO. 1 RANKED TEAMS

Saturday marks the first time ETSU is taking on a No. 1 ranked team since Oct. 27, 2001 when the Bucs defeated top-ranked Georgia Southern, 19-16 … That win marked the first-ever victory over a No. 1 ranked team for the Blue and Gold as Matt Wilhjelm connected on a pair of touchdown passes to Cecil Moore … After trailing 9-0 at halftime, the Bucs scored 19 straight points in the third quarter to ignite the comeback ... Overall, the Bucs were outgained 316-182, but the Buccaneer defense forced four turnovers (three fumbles and one interception) and turned two of the miscues into touchdowns ... Gerald Sensabaugh sealed the game with an interception on Georgia Southern’s final drive, which allowed Corey Carter to run three straight times en route to picking up a first down and allowing the Bucs to get into the victory formation ... Prior to that win, ETSU was 0-3 all-time against No. 1 ranked foes – losing to Marshall 34-10 on Nov. 9, 1996, and to Georgia Southern on Oct. 31, 1998 and on Oct. 28, 2000.

The ETSU football team is looking to open 2-0 for the second straight year … Last season, the Bucs won at Kennesaw State (20-17 in 2 OT) and versus Western Carolina (34-31) at Bristol Motor Speedway … A win at James Madison would mark the first time since 1993-94 when the Bucs opened 2-0 in consecutive seasons.

MORE ON THE CAREER NUMBERS

ETSU put up 31 points in last Saturday’s win over Limestone, marking just the fifth time in 23 games the Blue and Gold reached the 30-point mark … When the Bucs reach that number, ETSU is 5-0 in those contests since restarting the program in 2015 … Furthermore, ETSU has won its last 14 games when scoring at least 30 points with the last setback coming on Nov. 4, 2000 when Wofford defeated the Bucs, 35-31.

The SoCon is the only conference in college football that will take on both the reigning FCS and FBS national champions this season. In addition to ETSU squaring off against JMU this weekend, The Citadel will face Clemson on Nov. 18.

Tonight marks the 10th all-time meeting between ETSU and James Madison … The Dukes have won six of the nine meetings in the series, including four straight … The Bucs are searching for their first win over James Madison since defeating the Dukes, 9-6, back on Oct. 27, 1984 in Harrisonburg … The Blue and Gold won the first two meetings in the series by a combined score of 59-23 following back-to-back wins in 1979 (Sept. 8) and 1980 (Nov. 8) … George Cimadevilla made the longest field goal in program history against James Madison as he connected on a 52-yarder in the 34-3 setback in 1986.

The game has been picked up on Comcast SportsNet Mid-Atlantic Plus, which was announced on Wednesday.

The broadcast will air on CSN Mid-Atlantic Plus across the country via DirecTV and DISH Network (only for customers who have purchased the sports package with one of those two providers).

Below are the channel listings for CSN Mid-Atlantic Plus in Johnson City:

Fans, who live outside the CSN Mid-Atlantic Plus viewing area, can still watch Saturday’s game online via MadiZONE HD SportsNet, which is presented free to fans via a partnership with the JMU Alumni Association. Streaming host, Stretch Internet, has upgraded its flash-based player to HTML5 video for the 2017 season for a better viewing experience while also adding new OTT platforms to offer all JMU streams on Roku, Apple TV, Amazon Fire TV and Android TV.

The broadcast team of Robert Harper and former ETSU quarterback Matt Wilhjelm will provide the coverage from Harrisonburg on Saturday night, and studio hosts Don Helman, Mike Gallagher and Andy Jackson will provide ETSU fans all the information they need to complement their game-day activities.

In addition to following the Bucs on live audio and video, fans can get up to the minute stats Saturday via StatBroadcast. Fans can access live stats on their computers, mobile devices or tablets by visiting BucsStats.com or by clicking the link above.

Click here for more info on the ETSU Alumni Tailgate at JMU.