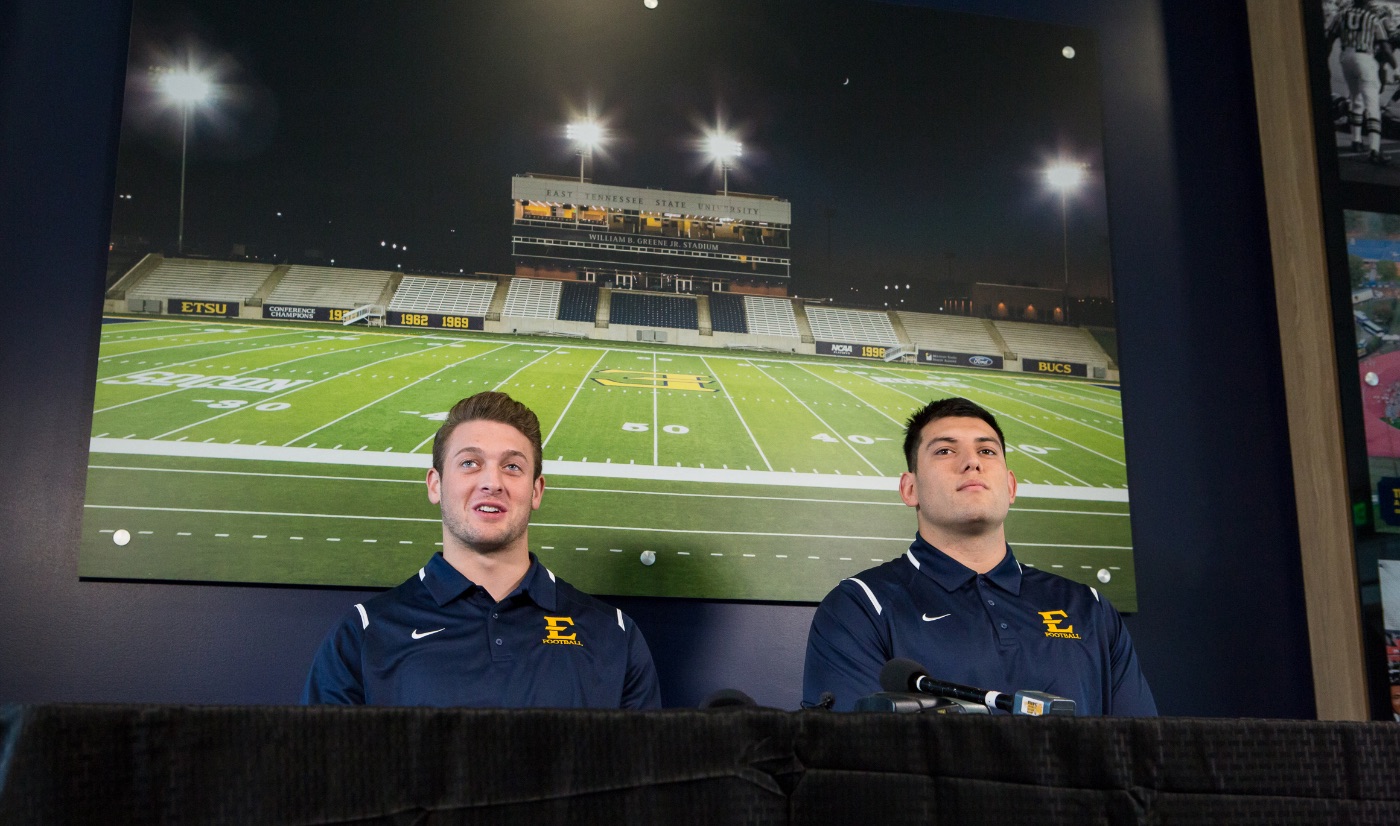 River Boruff (left) and Alex Rios (right) talked to the media about this Saturday's game against The Citadel.
Football Press Conference -- The Citadel
Related Links

JOHNSON CITY, Tenn. (Sept. 11, 2017) – The ETSU football team opens Southern Conference play this Saturday at William B. Greene, Jr. Stadium when the Buccaneers take on No. 13 and defending conference champion The Citadel. On Monday, the Bucs held their weekly press conference to preview this weekend’s match-up.

Below are comments from Coach Torbush, Boruff and Rios.

We are playing an outstanding football team this week. They are the two-time, defending SoCon champions. They went undefeated in conference last year and made the playoffs. They have the chance to do the same thing this year, so this is going to be another great opportunity for our football.

I just got through watching some of last year's film and I thought our players really played hard against these guys at their place.

This is a well-coached team. Obviously, Coach Thompson took over for Coach Houston when he left Citadel. He has the same mentality.

They run the triple option extremely well. They are not just an old-fashioned wishbone type football team. They'll line up two backs, they'll give you motion, they'll give you movement, they throw the ball extremely well from the drop back, which most wishbone teams don't drop back, but they do. They can throw it well when they have to. They have good wide receivers that are tough kids, and their offensive line blocks – I call it old school – very low. They'll cut at you, they'll pick at you. They'll tie your legs up. They do a great job there. Their quarterback is one of their returners on offense and he has a lot of game experience, so we know we have our hands full there.

They’ve scored over 70 points in two games and are rushing for over 400 yards a game, so they're doing the things on offense that they normally do. This football team knows how to move the football. They don't get impatient.

Defensively, they're very opportunistic. They play hard and play fast. We're getting ready to open SoCon play and each team in this league has a pretty good defensive football team. You're not going play many teams in our league that can't compete on a national level defensively. They're well schooled in what they do defensively.

This will be a great challenge for our football team to see how much improvement we've made against them since last year. Our players are tremendously excited about this opportunity. It's the first week in conference play. To face the defending SoCon champions and a team that is a national playoff contender makes it even more exciting. We are looking forward to the challenge and hopefully we have another great crowd this weekend.

DOES BEING ABLE TO STOP THE RUN LAST WEEK GIVE YOU CONFIDENCE HEADING INTO THIS WEEK?

It gives us confidence because obviously JMU had run the ball extremely well against East Carolina (whose an FBS school). I do feel that was one positive we took out of the JMU game – being able to stop the run and stop it consistently. We pretty much stopped the run the entire night. We put them in passing situations, but we were unable to convert on those like we needed to.

The Citadel is a totally different animal. They run a totally different offense. In a spread offense, normally there’s one running back, so you know who's going to have the ball. In this offense, you have dive, quarterback, pitch, so we have to make sure we have all three of those controlled, play in and play out. The one time you don't take the pitch, that's whose has the ball. Or the one time you go to sleep on the quarterback, he has the ball. They are a fullback-oriented team, they'll bleed it down there four, five yards a run by just giving it to him. If they can get four or five yards, they're not going to get greedy and go deep. They're going to take it and go right down the field.

ON GETTING THE CITADEL IN PASSING SITUATIONS

If we can get them in a situation where they have to throw, they're going left handed. They are a run team. That's how they make their living, so there is absolutely no doubt that we have to stop the run to have a chance to beat them.

The Citadel is a four-down team. If it's 4th-and-1 inside their own 40, there's a great chance that they'll go for it because they feel you won’t be able to stop them for less than two yards.

They can throw the football. If they had the perfect world, they wouldn't even throw it and run every time. But they throw the ball well. If you go back and look at last year's film, they threw and caught the ball extremely well. They get a lot of big plays off play action. On 3rd-and-long situations, they can drop back, throw it and throw it very effectively. But we have to stop the run first. If we are able to do that, then we're going to be successful.

ON PRACTICING AGAINST THE OPTION IN PRACTICE THIS WEEK

I have played against option teams for a long, long time. If you had the perfect world you'd like to play against this type of team after our open date or the first game of the season, so you have more time to prepare for them.

Right now, we only have three days to get done what we need to get done in practice. Obviously, we can't sit there and simulate chop/cut blocks, because if we do that then we are risking losing a player during the week. We have got to do a great job on understanding blocking schemes, gap control and option responsibilities.

What you don't want to do to in this type of attack is get everybody in a one-on-one situation where you need to have two guys. There needs to be one to take on a block and one to be able to be free and make a tackle. We have to be very, very disciplined. I think our coaches will do a great job coaching that this week. But we still need to realize that The Citadel is a patient team. Even if you stop ‘em, stop ‘em, stop ‘em, they're going keep going until they finally break one if you are not careful.

ON PREPARING FOR THE OPTION

We have to play our specific responsibility every single play. That’s what it breaks down to on every play. There needs to be a guy on quarterback, fullback, running back, and pitch. Everything comes down to a “T” every single play.

Going up against the option is a whole new animal completely. It's unlike any type of spread or any other offense that's run. The triple option – is most of the time – the thing that people dread to play, but we're excited to go out there and play against it.

It was definitely different. Coming from a group of people screaming your name and encouraging us in the first week, to a group of people screaming your name to say quite a lot different things last week, is extremely different. But both games had great atmospheres nonetheless. Both crowds brought such loud atmospheres to the playing field. We couldn’t have asked for anything better.

ON PLAYING A DIFFICULT SCHEDULE OVER THE NEXT FEW WEEKS

Each week, we hope to improve as a team and our goal is to be contending for a SoCon championship at the end of the year. There's nothing else that we'd rather be happy with. We are always focusing on improving as a unit and if we do that during these next few weeks we will be a better football team.

ON PLAYING THE CITADEL

I didn't get the chance to play them last year, but I'm looking forward to it this weekend. They have a stacked defense, but I have a lot of confidence in our offense. Week in and week out, we are playing the top teams, so we have to bring it each time we step out on that field.

WHAT DO YOU FEEL IS THE STRENGTH OF THE OFFENSIVE LINE RIGHT NOW?

I feel like it's a mix of both right now. Obviously we all have areas we need to work on, but I feel like as the season goes, we have been getting better and better.

DO YOU GUYS TAKE IT PERSONALLY WHEN YOUR QUARTERBACK GETS HIT?

Yeah, we do take it personal. It's like hitting my brother out there, so I’m going to hit you back.

HOW FRUSTRATING WAS IT LAST SATURDAY AGAINST JMU WHERE THE OFFENSE WAS STARTING IN POOR FIELD POSITION AND COULD NEVER GET MUCH GOING IN THE FIRST HALF?

It’s frustrating when you just keep plugging away the entire game and things don’t go your way. When that happens, we have to keep keep fighting. That's where grit comes in. We have to be tough and strong leaders in those situations.

HOW TOUGH IS IT WHEN YOU COME ON THE FIELD AND YOU START ON THE 10-YARD LINE?