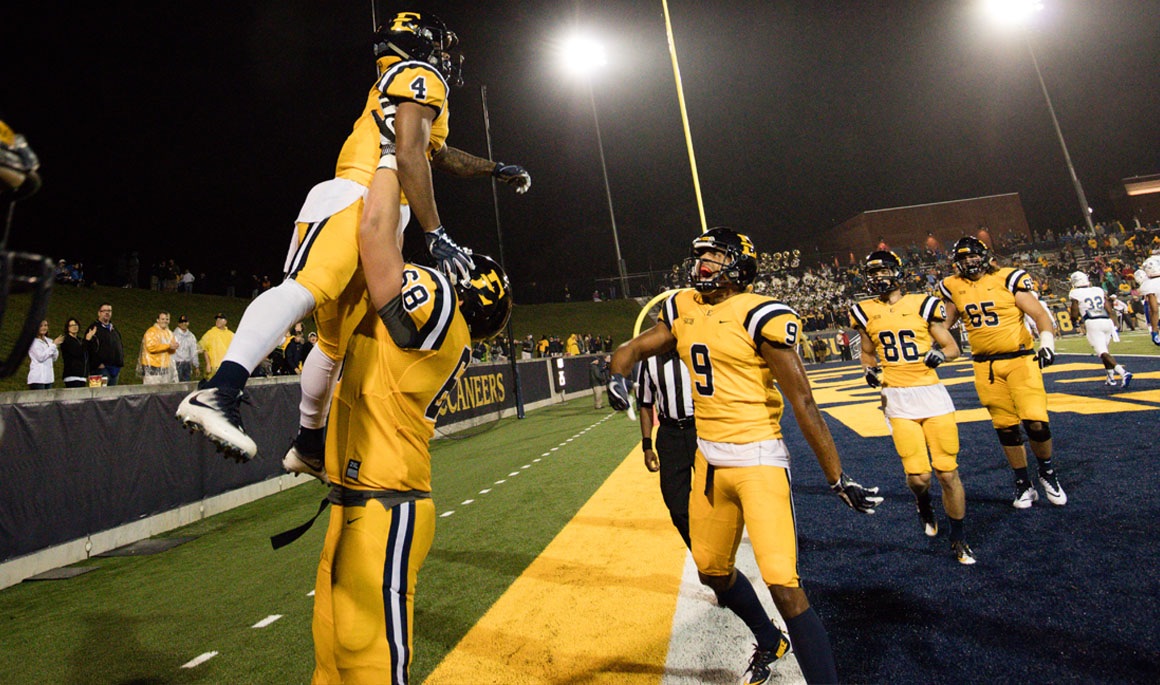 Saturday is “Youth Day” at William B. Greene, Jr. Stadium … Children 12 and younger receive free admission with a paying adult … The family-friendly Food City Fan Zone will open at 10 a.m.

MORE THINGS TO KNOW FOR SATURDAY

Junior defensive back Domenique Williams became the first Buccaneer since Allen Davis to return an interception for a touchdown in last Saturday’s game at JMU ... Williams had a 33-yard INT returned for a touchdown in the second quarter against the Dukes ... Davis was the last Bucs to accomplish the feat as he returned an INT 90 yards for a touchdown against Chattanooga back on Nov. 15, 2003.

ETSU put up 31 points in the season opening win over Limestone, marking just the fifth time in 24 games the Blue and Gold reached the 30-point mark … When the Bucs reach that number, ETSU is 5-0 in those contests since restarting the program in 2015 … Furthermore, ETSU has won its last 14 games when scoring at least 30 points with the last setback coming on Nov. 4, 2000 when Wofford defeated the Bucs, 35-31.

Austin Herink did a tremendous job sharing the wealth with his Buccaneer receivers in the season opener against Limestone … Herink – who threw for 239 yards in the 31-10 win over Limestone – completed passes to eight different wide receivers … Senior Vincent Lowe led the group as he tied a career high with five receptions … Redshirt junior Drake Powell finished with three receptions, while Quan Harrison and Braxton Richburg both hauled in two catches in their first ever collegiate game … Last Saturday at JMU, Herink also completed passes to eight different receivers.

ETSU is 3-4-1 all-time in games played on Sept. 16 … The last time the Bucs played on this date was back in 2000, when the Blue and Gold defeated VMI 38-3 … In the win over VMI, Todd Wells recorded 346 yards of total offense, marking the fourth-high total in program history … The Bucs played to a scoreless tie against Parsons College on Sept. 16, 1967, in a game played in Kingsport … In that game, Johnny Russaw set the single-game school record with 14 punts … ETSU’s other wins on this date include: a 21-14 victory over Western Carolina (1978) and a 27-24 win over Murray State (1965) … On this date in 1972, Greg Stubbs recorded a 97-yard kickoff return against Carson-Newman, marking the second-longest kickoff return in program history.

The SoCon is the only conference in college football that will take on both the reigning FCS and FBS national champions this season. In addition to ETSU squaring off against JMU last weekend, The Citadel will face Clemson on Nov. 18.

Despite only playing its third year of FCS football, five Buccaneers carry start streaks into the 2017 season … Austin Herink (QB), Matt Pyke (C), Chris Bouyer (DL), Dylan Weigel (LB) and Trey Quillin (LB) have started all 24 games for the Bucs since the program was restarted in 2015.

Saturday marks the 26th all-time meeting between ETSU and The Citadel with the Bucs holding a 15-10 lead in the series. … ETSU holds a 9-3 advantage in games played in Johnson City, while the Bulldogs hold a slight 7-6 advantage in games played in Charleston … The Bucs’ longest win streak in the series is a four-game stretch, which happened twice from 1981-84 and 1993-96, while the Bulldogs won three consecutive games from 1990-92 … The Blue and Gold have won seven of the last 11 meetings, including a 56-34 win in 1994 … ETSU’s largest win in the series came in 1983 when the Bucs shutout The Citadel, 45-0, while the Bulldogs’ largest win was a 48-21 victory in 1988 … Saturday marks the first time The Citadel is playing in Johnson City, since Jonathan Godfrey connected on a 22-yard game-winning field goal on Nov. 22, 2003, lifting the Bucs to a 16-13 victory, which at the time marked the final football game for the Bucs until they reinstated the program in 2015 … Last season, The Citadel scored the first 21 points of the game en route to defeating the Bucs, 45-10 ... ETSU’s Haddon Hall pulled in a three-yard pass on fourth down in the second quarter, marking his first collegiate touchdown … However, the Bulldogs answered with a 38-yard run by Cam Jackson, and any momentum built by the Bucs was shattered when Austin Herink was picked off inside the red zone in the closing minutes of the second quarter … The Bulldogs turned that interception into a 29-yard field goal to take a 31-7 lead into halftime … The Citadel out-gained ETSU, 504-253, with 427 yards coming on the ground.

Following each game, fans can tune into the General Shale Post Game Show for a full wrapup, with game statistics, players and coach interviews, and other post-game information.

In addition to following the Bucs on your mobile device and/or tablet with live audio and video, fans can get up-to-the-minute stats by following the action via StatBroadcast. Fans can access live stats on their computers or mobile devices via ETSUBucs.com or by clicking here.