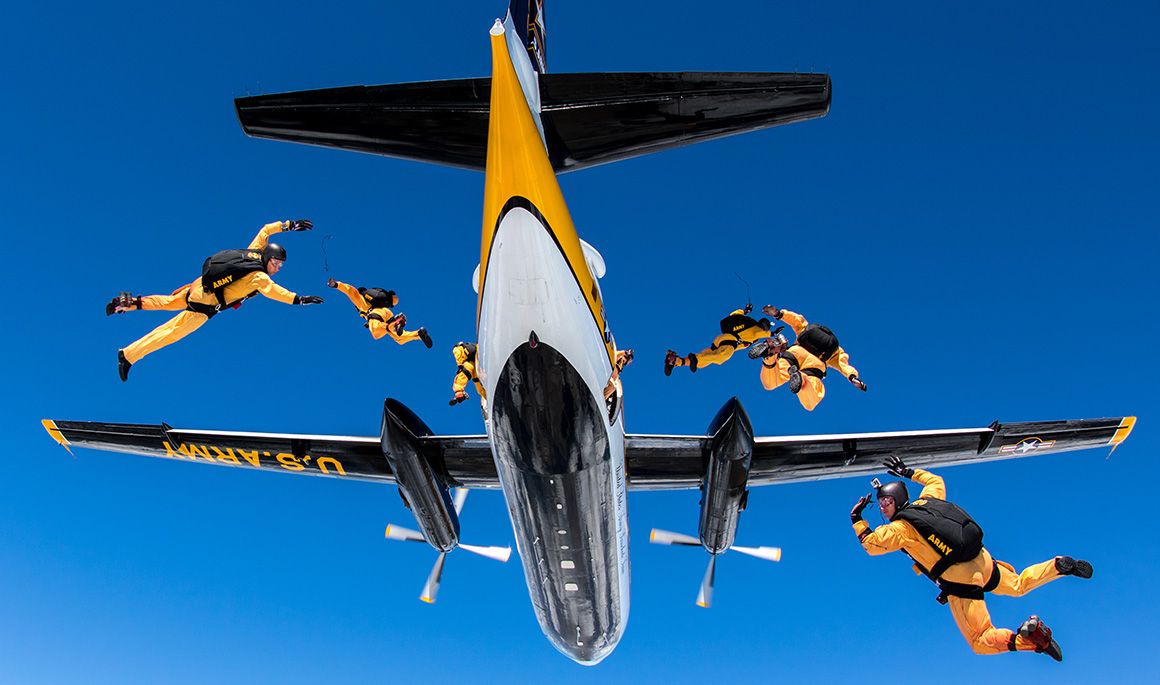 JOHNSON CITY, Tenn. (Sept. 21, 2017) – Fans attending Saturday’s ETSU football game with the Mercer Bears will have a great reason to arrive early, as the U.S. Army Golden Knights will be on hand to perform prior to kickoff.

The Golden Knights are the United States Army's official aerial parachute demonstration team, and they will perform just prior to Saturday’s football game inside William B. Greene, Jr. Stadium. The first jump is scheduled to occur at approximately 3:10 p.m., with the entire nine-individual unit landing on the turf inside the stadium over the next 15 minutes.

Plans for Saturday include the team presenting the Stars and Stripes as the ETSU Marching Bucs play the national anthem. In addition, the game ball will be delivered, while a special gold baton will also be presented to ETSU alum and U.S. Army Lt. Gen. (Retired) Ronald V. Hite.

This special treat for ETSU fans was made possible by the efforts of the ETSU ROTC.

“It is a distinct honor to have the United States Army Golden Knights present the game ball for the football game against Mercer,” said Lt. Col. Shawn Dodge, ETSU’s chair of military science. “With the backdrop of the mountains, the beautiful new stadium and the excitement of the fans, the elite Army Soldiers will drop from high in the sky to present the National Colors as well as the game ball on target in the center of the field.

“The Golden Knights are one of only three Department of Defense-sanctioned aerial demonstration teams, along with the U.S. Navy Blue Angels and the U.S. Air Force Thunderbirds.  We would like to thank the athletic department and the senior leadership at ETSU for helping us make this happen.  For many, this is a once in a lifetime opportunity.”

More information regarding the Golden Knights can be found below.

In 1959, nineteen Airborne Soldiers from various military units formed the Strategic Army Command Parachute Team (STRAC). Brigadier General Joseph Stilwell Jr. gathered the Soldiers with the intent of competing in the relatively new sport of skydiving, which at that time was dominated by the Soviet Union. That year, the U.S. Army team began representing the United States on the international competition circuit, and performed their first demonstration in Danville, Virginia. Two years later, the Department of Defense announced that the STRAC team would become the United States Army Parachute Team.

By 1962, the team earned the nickname the "Golden Knights". "Golden" signified the gold medals the team had won while "Knights" alluded to the team’s ambition to conquer the skies.

Since then, the Golden Knights have conducted more than 16,000 shows in 50 states and 48 countries, reaching an average of 60,000 people per show. The team has earned the U.S. Army 2,148 gold, 1,117 silver, and 693 bronze medals in national and international competition. Team members have also broken 348 world records.

The Golden Knights are one of only three Department of Defense-sanctioned aerial demonstration teams, along with the U.S. Navy Blue Angels and the U.S. Air Force Thunderbirds. The team is composed of approximately 95 men and women, which includes four parachute units, an aviation unit and a headquarters. The demonstration teams, which use five dedicated aircraft, perform at more than 100 events per year. The tandem section is known for taking Soldiers, celebrities and heads of state on jumps, and the competition section focuses on winning national and international skydiving events.

Under a canopy of black and gold I fly the colors of the Army. I volunteered to become an ambassador of my service and I will always endeavor to uphold the prestige, honor, high standards, and esprit de corps of the United States Army Parachute Team. The memories, achievements and legacy of all my predecessors are my responsibility; I will not fail them.

Safety is my way of life. Nothing is worth its compromise. No jump is so important, no flight is so essential, and no activity that pressing. All shall look to me for the standard.

Always will I keep myself mentally alert, substance free, physically fit, and morally straight. I represent the image of the U. S. Army. I cannot lose the confidence entrusted in me as a Golden Knight and I will not tolerate those who do.

Professionalism is my trademark regardless of the time or place. My pursuit of excellence in training and performance is with diligence, dedication and attention to detail. My own goals are second to those of the Team and the expectation of me to pass on my skills to all who desire.

The goal I pursue is simple, yet bears a responsibility I must discharge without reservation: when I have gained the respect, admiration, and gratitude of the American public and my teammates, then I have fulfilled my mission as a Golden Knight.