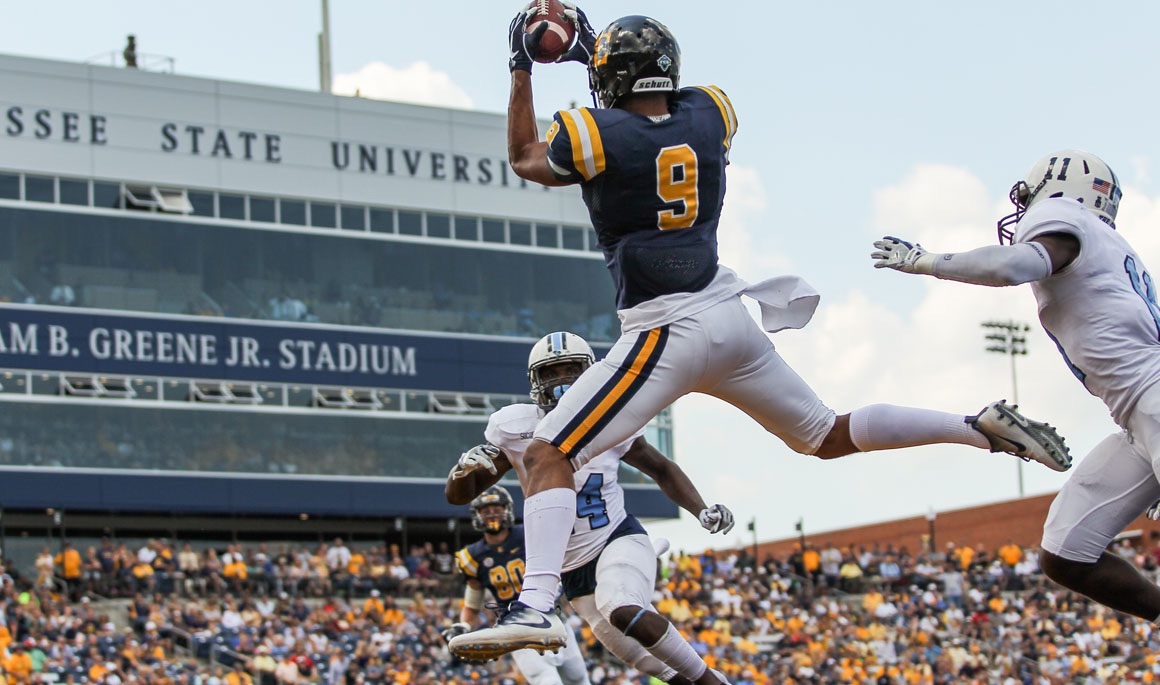 Bucs look to bounce back against Mercer on Saturday
Mercer at ETSU | September 23, 2017
Related Links

JOHNSON CITY, Tenn. (Sept. 22, 2017) – Coming off setbacks to a pair of top-10 teams, the ETSU football team looks to bounce back into the win column this weekend when the Buccaneers host Mercer at William B. Greene, Jr. Stadium. Kickoff is set for Saturday at 3:30 p.m.

Saturday marks the second straight home game for the Blue and Gold … The Bucs play four of their first six games at Greene Stadium.

Following his 19-tackle performance last Saturday against The Citadel, redshirt junior linebacker Dylan Weigel (Pickerington, Ohio) was named Southern Conference Defensive Player of the Week … The 19 tackles are the most by a SoCon player this season, while ranking second among FCS players.

As a unit, the Buccaneer defense ranks third in the SoCon in total defense (361.0) and first in passing defense (145.7) … Offensively, ETSU and Mercer are the two teams in the conference who have scored on all their trips in the red zone this season.

ETSU has forced at least one takeway in each of its first three games this season ... Paul Hunter has two interceptions this season, which ties him for the most by a single player in a season since the return of the program in 2015, when former cornerback Tavian Lott reached that same number of interceptions ... Overall, ETSU has now forced at least one turnover in eight straight games and in 18 of its last 21 contests.

ETSU put up 31 points in the season opening win over Limestone, marking just the fifth time in 25 games the Blue and Gold reached the 30-point mark … When the Bucs reach that number, ETSU is 5-0 in those contests since restarting the program in 2015 … Furthermore, ETSU has won its last 14 games when scoring at least 30 points with the last setback coming on Nov. 4, 2000 when Wofford defeated the Bucs, 35-31.

ETSU TO PLAY TENNESSEE IN 2018

In February of 2015, ETSU announced the Buccaneers will play Tennessee on Sept. 8, 2018 at Neyland Stadium ... ETSU will earn a game guarantee of $500,000 for playing the Volunteers in Knoxville.

MORE FUTURE OPPONENTS FOR THE BUCS

In addition to playing Tennessee in 2018, the ETSU Department of Intercollegiate Athletics announced on April 8, 2016, that the Buccaneers will be playing both Vanderbilt and Appalachian State starting in 2019 ... The Bucs will also play at Vanderbilt in 2021 and at Appalachian State in 2024 ... ETSU also announced in June that the Blue and Gold will travel to Athens in 2020 to take on Georgia in Sanford Stadium ... The Buccaneers will earn a game guarantee of $550,000 against Georgia.

Mercer enters this weekend’s SoCon game with a 1-2 overall record and 0-1 mark in conference play … The Bears are coming off a 24-10 setback at FBS No. 15 Auburn last Saturday where Mercer forced five turnovers – including a program record four fumble recoveries.

Mercer is receiving votes in the STATS FCS Top 25 Poll

The Bears return seven offensive starters, five defensive starts and two specialists from a year ago

Saturday marks the third all-time meeting between ETSU and Mercer … The two programs have played in back-to-back seasons with the Bears winning both contests … Mercer won the 2015 meeting 52-0, while the Bears held on for a 21-13 victory last November in Macon … In last year’s setback, the Blue and Gold out-gained Mercer, 372 to 367, but the Bears rallied for 14 unanswered points in the fourth quarter and sealed the win with an interception at the goal line in the final minute … Last season, Austin Herink was 25-for-37 with 267 yards and one touchdown, while Drake Powell finished with eight catches for 143 yards, including a 69-yard touchdown reception … Jajuan Stinson has 73 rushing yards on 15 carries in two career games against Mercer (4.9 yards per carry) … Dylan Weigel has posted back-to-back 11-tackle games against the Bears, while Austin Gatewood has 17 tackles in two career games versus the Bears.

ETSU hits the road as the Bucs take on Furman next Saturday, Sept. 30 in Greenville, S.C. … Kickoff is set for 1 p.m. in Paladin Stadium.