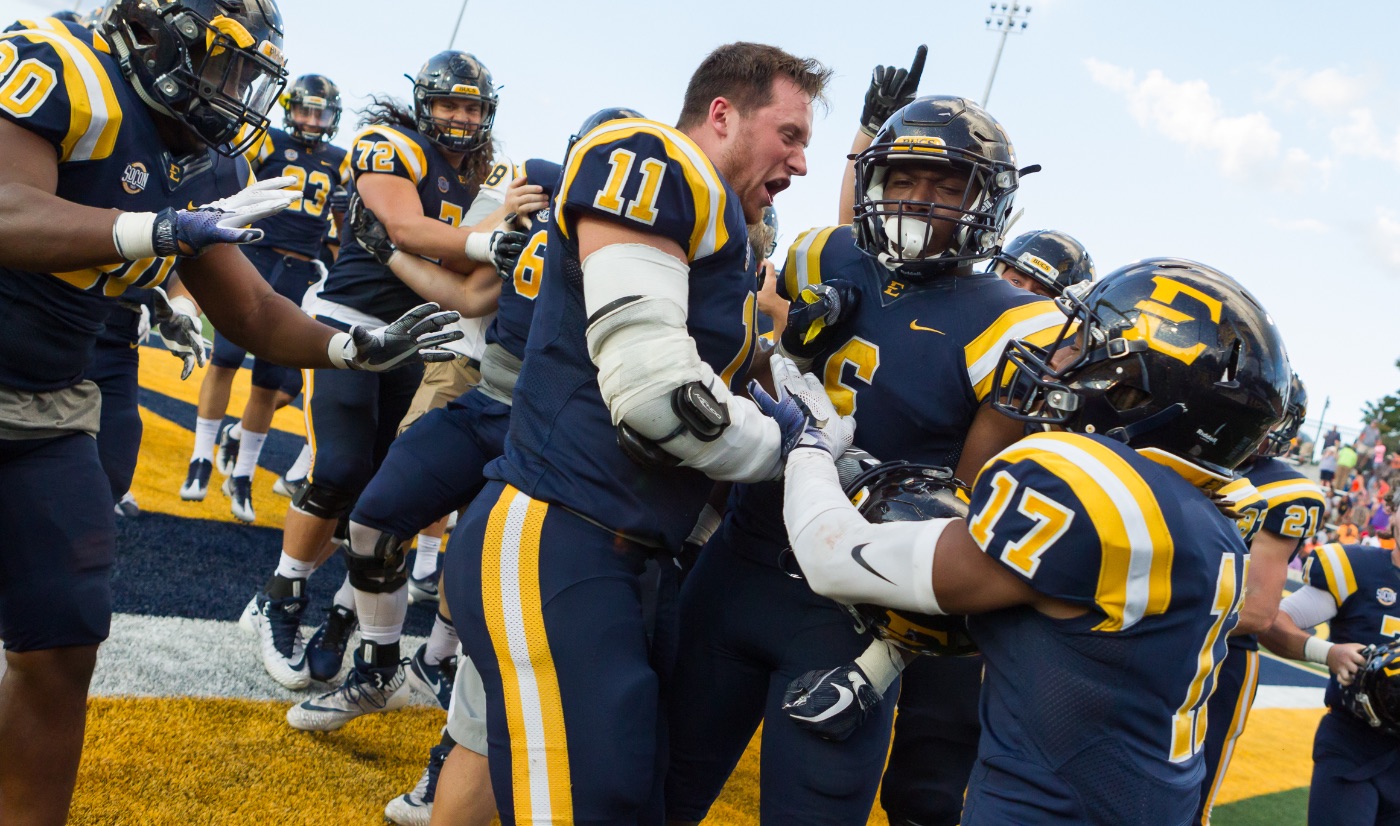 The Bucs celebrate after rallying past Mercer on Saturday evening at William B. Greene, Jr. Stadium.
Bucs rally past Mercer to take overtime victory, 26-23
Mercer at ETSU | September 23, 2017
Related Links

Down 20-10 early in the fourth quarter, the ETSU football team scored 10 unanswered points to force overtime with Southern Conference foe Mercer Saturday afternoon in front of a sold out crowd at their new on-campus home. In the extra period – after the Bears connected on a 29-yard field goal to take a 23-20 lead – ETSU junior quarterback Austin Herink (Cleveland) wasted little time, finding junior tailback Jajuan Stinson (Knoxville) wide open in the end zone on the Buccaneers first play of the extra period, giving ETSU a dramatic 26-23 win and its first SoCon victory of the season.

The Bucs’ comeback was a dramatic turn of events. After having missed a chip-shot field goal that would have tied the game at 13 late in the third quarter, the Bucs instead watched the Bears drive 85 yards to score a touchdown and take a 20-10 lead into the fourth quarter. The crowd of 8,022 fell quiet.

But from there, ETSU outscored the Bears 16-3 the rest of the way to collect its first win over Mercer in three tries. Since the return of football in 2015, ETSU had played Mercer in all three seasons and lost a close battle in Macon, Ga., 21-13 a year ago.

Defensively, the Bucs held Mercer to just one touchdown in its first six possessions and kept the Bears to just a 2-of-10 clip on third down conversions. Defensive back Kaman Cooper (Warner Robins, Ga.) led ETSU with eight tackles, while linebacker J.D. Griffin (Kodak) had a sack and two tackles for loss on the night.

The Bucs will hit the road again next Saturday, traveling to Greenville, S.C., to take on SoCon rival Furman at 1 p.m.