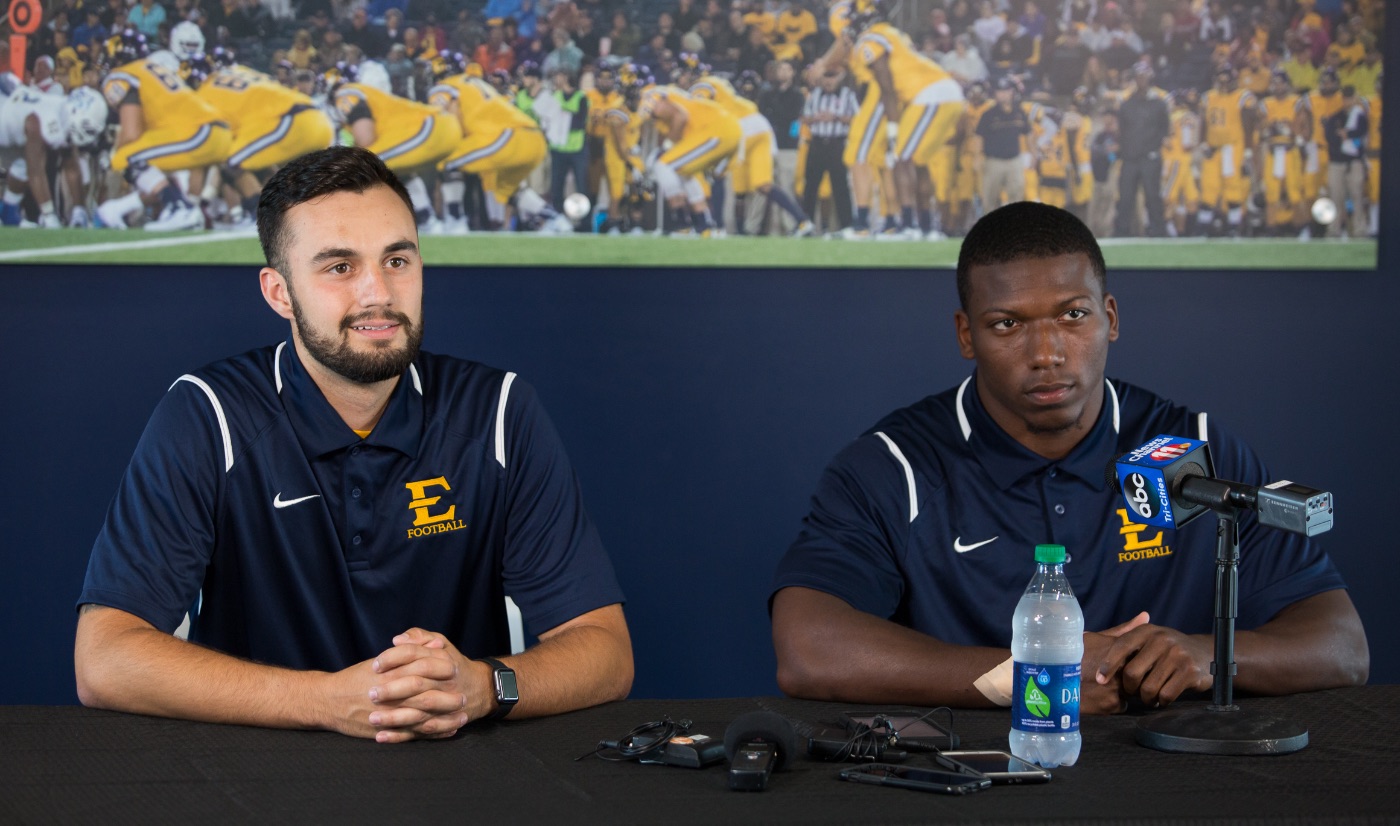 Below are comments from Coach Torbush, Stinson and Jerman.

Saturday was a great ball game. Anytime you're able to get a win in the SoCon, you have to feel good about it. We beat a good football team on Saturday. Mercer is very well coached. They have good players. They're exactly what we're going see week in and week out in the SoCon, so we know that we beat a good football team and we never take a win for granted. We're excited about it.

We ended up winning 26-23 in overtime, but we were up 10 with 10 minutes to go in the second quarter and down 10 with a minute left in the third. The game could have gone either way, but I thought our young men continued to fight, and in the end, we gave ourselves a chance to win.

One thing we definitely have to do is run the ball better, which we know that. We have the ability to run the ball better. We have some really good running backs and our offensive line is good, but we have to average more than 2.5 yards per carry. A couple of those came because of quarterback sacks, but at the same time, we need to get in more 3rd-and-short situations, so that we have the ability to run or throw depending on what we want to do.

We had over 100 yards of penalties, which was way too many. I think some of ours were due to our aggressiveness. Some of it was silliness, but again, for us to get done what we need to get done as a football team, we can't penalize ourselves, especially when we make a first down and then get it brought back.

Once again this week we have a very good football team that we are going to face. Furman had a big win last week at Colgate, 45-14, but then you look at their three losses, everybody says, "well, they are 1-3.” But they lost at NC State who just beat Florida State. They only lost to Wofford – who is 3-0 – by one point, 24-23, and they also lost to a talented Elon team by a field goal. So two of their three losses are by a combined five points.

They are a good football team on both sides of the football. They lost quite a few players from last year and brought in a new coaching staff under Coach Hendrix. He was a really good player at Furman, but his background has basically been at Air Force, where he's been for a number of years. He did a great job there and I know he's excited to come back to his alma mater. He's doing a really, really nice job with them. They are a very disciplined football team.

Before this week I would have told you they were a flex-bone type team, but after watching them on film, they really are not. They are basically a two-back, they take another back or tight end, put them in motion to do a lot of things, but they are pretty diverse on offense.

They are extremely well coached and very disciplined on defense. They run to the ball well. They have some ball hawks in the secondary as they have forced some turnovers early on this year.

On offense, it starts with their quarterback. He can throw the ball very well and they have three or four running backs you have to zone in on. They are spraying the ball around quite a bit to everybody, so there’s not that one guy that you can key on.

They have a solid offensive line. Their wide receivers are typical SoCon receivers, in the fact they are really good players. I do think this league has a lot of good wide receivers, so we know we'll have our hands full.

We are excited about the opportunity to play in this game after a big win. This will be our first SoCon road game. I do feel like that we have played pretty well on the road, so, we'll see where we are at this weekend. It's going to be a big game for us. If we want to get done what we need to get done in the SoCon this year, and have any aspirations after that, this is a game that we need to play well in and we need to win. Our players know that and I think they'll be excited about playing. It’s the great thing about SoCon, if you can't get ready to play the team we're getting ready to play, then you don't need to be playing college football, because all of these games are important for us.

Furman has been a big competitor to us for a number of years. They've had a great program for a long, long time, and so what we need is to go down there and play as well as we can. We need to eliminate the penalties. We need to continue to improve offensively, defensively and the kicking game. If we do that, everything else will take care of itself.

Throughout the game, JJ and I, and Antonio and I talk depending on the wind condition because you've seen already that there's a little bit of wind that blows in stadium all the time. JJ is really consistent inside 55 yards, so depending on the game situation; I have absolutely no problem with him trying any kick from 55 yards. Common sense states, if we were ahead by 10, then it may be a punt situation, but if we need the points or if it’s going to give us a chance to win, then I feel really comfortable sending JJ out there from that 55-yard range.

A kicker is going to miss one every now and then. It’s just like in baseball... You may hit .350, but that means you are going to make two outs every three at-bats. JJ has been very, very consistent in what he's done. I couldn't ask for any more from a place kicker than what JJ has given us over the past two-plus seasons.

TWO OF FURMAN’S THREE LOSSES HAVE BEEN BY THREE POINTS OR LESS… WILL THIS WEEK COME DOWN TO SPECIAL TEAMS?

If it comes down to a field goal then I feel pretty good about our chances. I think it'll be a close ball game. Now whether it comes down to kicking a field goal, all that is predicated by how we are doing during the game. I’ll be adding more to my age really quickly if we keep playing these close games. We want to play four good quarters of football. If we can play as well as we can on offense, defense, and special teams, then if we get beat we can say that team was just better. But if we don't play well in all three phases, then you leave yourself some doubt.

ON THE ADDITION OF BLAKE RODGERS TO THE RUN GAME

Blake is a good football player. He has some strength, he's big and physical. I really believe we have about five or six running backs that I have no problem putting in a game and feel like they are going to get the job done for us.

Blake has shown some strength and power. He's a guy on 3rd-and-2 that who you like to have the ball in his hands, because as big as he is, he should be able to get those two yards. Blake has been getting better every week and he's doing some good things.

Obviously, Jajuan is the guy that has shown us what he can do over the two years. He's done it in the good, bad, and the ugly and continues to play well. I was excited that he was able to get that touchdown reception that won us the game on Saturday.

DO YOU THINK THE RUNNING BACKS ARE READY TO HAVE A BREAKOUT GAME?

Yeah, I think it's coming. We have struggled these past four games. I think eventually we'll get it together and be able to provide a stable running game for our offense.

WHAT’S THE KEY TO BREAKING OUT?

ON LAST YEAR’S FURMAN GAME… WE’RE YOU A LITTLE OVER CONFIDENT COMING IN KNOWING THEY WERE 0-5?

No, we weren’t over confident in them. We know every game is going to be tough, especially in the SoCon. Last year, they got ahead early and we couldn’t answer. Hopefully we can get a different result this year.

ON THE MERCER WIN AND PLAYING ON THE ROAD THIS WEEKEND

It was definitely a satisfying after losing to them two years in a row, but it's just another win. We have to build on this and keep going. It was a confidence boost for us. We know we can win, and to actually see the result at the end of the game, that's what helps us move on to the next week.

Hopefully we will have fans travel this weekend since it’s not a far trip to Furman. But when we are on the road, we have to hype each other up, and we do a good job of that. If you watch us on the sidelines, there's always a lot of energy. But if you have faith in your teammates, that's all you need. You don't need a whole big crowd cheering for you. You just have to have trust in your teammates.

ON HIS KICKING RANGE

I'd say I am confident anywhere from 55 yards and in. In practice, we've tried a couple 60 and I've made them, but that was with the wind at my back. I went back and watched my 49-yard kick, and I made it by a few yards. But there are just a lot of factors when you get to that point, because any little thing can screw it up when you're that far out.

WHEN YOU WATCH A GAME LIKE YESTERDAY, THE EAGLES AND GIANTS, SEE A GUY KICK A 61 YARDER, DO KICKERS AROUND THE COUNTRY GET ALL FIRED UP WHEN STUFF LIKE THAT HAPPENS?

Yeah. That's a pretty rare thing. The longest is 64, so to see a 61 – I'm not going to lie – I got pretty hyped when I watched it. I watched it four or five times. It snuck in there, but it's awesome to see that.