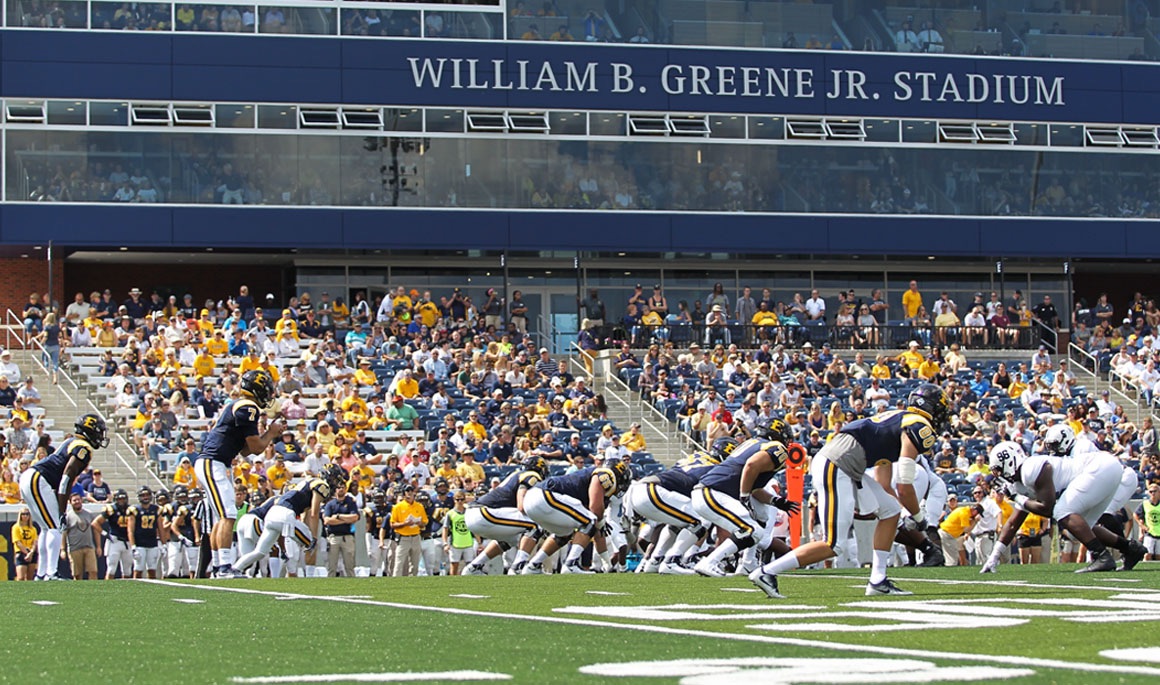 JOHNSON CITY, Tenn. (Sept. 29, 2017) – The ETSU football team gears up for its first Southern Conference road game of the season with a visit to Greenville, S.C., to take on Furman this Saturday afternoon at Paladin Stadium. Kickoff is set for 1 p.m.

ETSU rallied from 10 points down in the fourth quarter, outscoring Mercer 16-3 to finish with a 26-23 overtime victory … For the game, Mercer outgained the Bucs 406-387 … While the Bears held a 149-103 advantage on the ground, the Bucs threw for 284 yards compared to 257 for Mercer … The Bucs defense held Mercer to just one touchdown in their first six possessions … Austin Herink threw for a career-high 284 yard and completed 79% of his passes (26-for-33) with one passing touchdown … Herink also rushed for 34 yards and one touchdown … Jajuan Stinson finished with 94 all-purpose yards … Stinson caught four passes for 60 yards and one touchdown, while posting 34 rushing yards … Herink completed passes to 11 different receivers … ETSU won time of possession 36 to 24 … The Bucs scored on three of final four drives to end the game … ETSU went 4-of-8 on third down conversions in the second half, while holding Mercer to 0-of-3 in the second half and 2-of-10 for the game … The win marked Austin Herink’s fifth career comeback victory with three coming in the fourth quarter or overtime … Following his 318 yards of total offense on Saturday, Herink moved past Jeff Morgan for sixth all-time in program history with 4,107 yards … The teams combined for 21 penalties and 214 yards … The Bucs were penalized 11 times for 119 yards and Mercer was flagged 10 times for 95 yards.

ETSU is looking to post its first SoCon road win since beating Western Carolina, 27-7, back on Sept. 28, 2002 … The Bucs have lost their last 11 SoCon road games since that win over the Catamounts … A win today in Greenville, would mark the Bucs’ first SoCon road win in 5,481 days (15 years and two days).

For the first time this season and the third time in his career, ETSU junior kicker JJ Jerman was tabbed Southern Conference Special Teams Player of the Week, announced by the league office on Monday … Jerman – who made two of his three field goal attempts and both extra points – helped lift ETSU to a 26-23 overtime win over Mercer on Saturday. The Seymour, Tenn. native connected on a 25-yard field goal in the second quarter, while his career-long 49-yard field goal with 11:22 remaining in the fourth quarter sparked the Bucs’ comeback. The 49-yard field goal marked the fourth longest in program history, and is the longest field goal by a SoCon kicker this season and tied for the sixth longest make among FCS players this year … With his two extra points and two field goals in the game, Jerman made some history on Saturday; he now has 49 extra points in his career, moving into a tie for fifth on the all-time list with Herbie Campbell. Meanwhile, his two field goals were the 24th and 25th of his career, moving him past Bobby Neff for fourth all-time … This marks the third career weekly honor for Jerman; he received the award last year after lifting the Blue and Gold to victories over Kennesaw State and No. 18 Samford.

ETSU redshirt junior quarterback Austin Herink was named the Southern Conference Student-Athlete of the Week, announced by the league office on Wednesday … Herink helped guide the Buccaneers to a 26-23 overtime win over Mercer last Saturday afternoon at William B. Greene, Jr. Stadium. The Cleveland, Tenn. native set career highs in completions (26), passing yards (284), and total yards (318), while completing 79 percent of his passes (26-of-33). Herink – who connected on a 25-yard touchdown to Jajuan Stinson for the game-winning score – also rushed for 34 yards and one touchdown. The Buccaneer quarterback posted his fifth come-from-behind win, with three of those coming in the fourth quarter or overtime. Following his 318 yards of total offense, Herink moved past Jeff Morgan for sixth all-time in program history with 4,107 … Herink is majoring in sport management and has a 3.68 cumulative grand point average; he earned a 3.94 GPA last semester.

Linebackers Dylan Weigel and River Boruff among Southern Conference leaders in tackles in 2017 … Boruff ranks third in the SoCon in tackles per game (9.5) and Weigel is sixth (8.8) … Since 2015, both Weigel and Boruff are the top tackle leaders among ETSU players … Weigel has 268 career tackles in 26 games and Boruff has 161 in 25 games.

Two of Furman’s three losses have been by three points or less, with its other setback being a 49-16 loss at North Carolina State … The Paladins lost to Wofford 24-23 in the season opener and suffered a 34-31 setback to Elon

The Paladins have turned the ball over seven times (five fumbles/two interceptions), while their defense have forced five (four fumbles and one interception)

Defensively, safety Aaquil Annoor leads the team with 35 tackles, while linebacker Chris Washington has 27 tackles, two sacks, one forced fumble and a fumble recovery … Red-shirt junior defensive lineman Chinedu Okonya also has two sacks on the season … As a unit, the defense has totaled 11 sacks

Saturday’s game will be streamed live on ESPN3 via the WatchESPN app … Bob Mihalic will handle the play-by-play duties, while Sam Wyche will be the color analyst and Scott Cole will handle sideline reporting.

In addition to following the Bucs on your mobile device and/or tablet with live audio and video, fans can get up-to-the-minute stats by following the action via StatBroadcast. Fans can access live stats on their computers or mobile devices via FurmanPaladins.com.

ETSU returns home to host Robert Morris next Saturday on Homecoming … Kickoff is set for 3:30 p.m. at William B. Greene, Jr. Stadium.