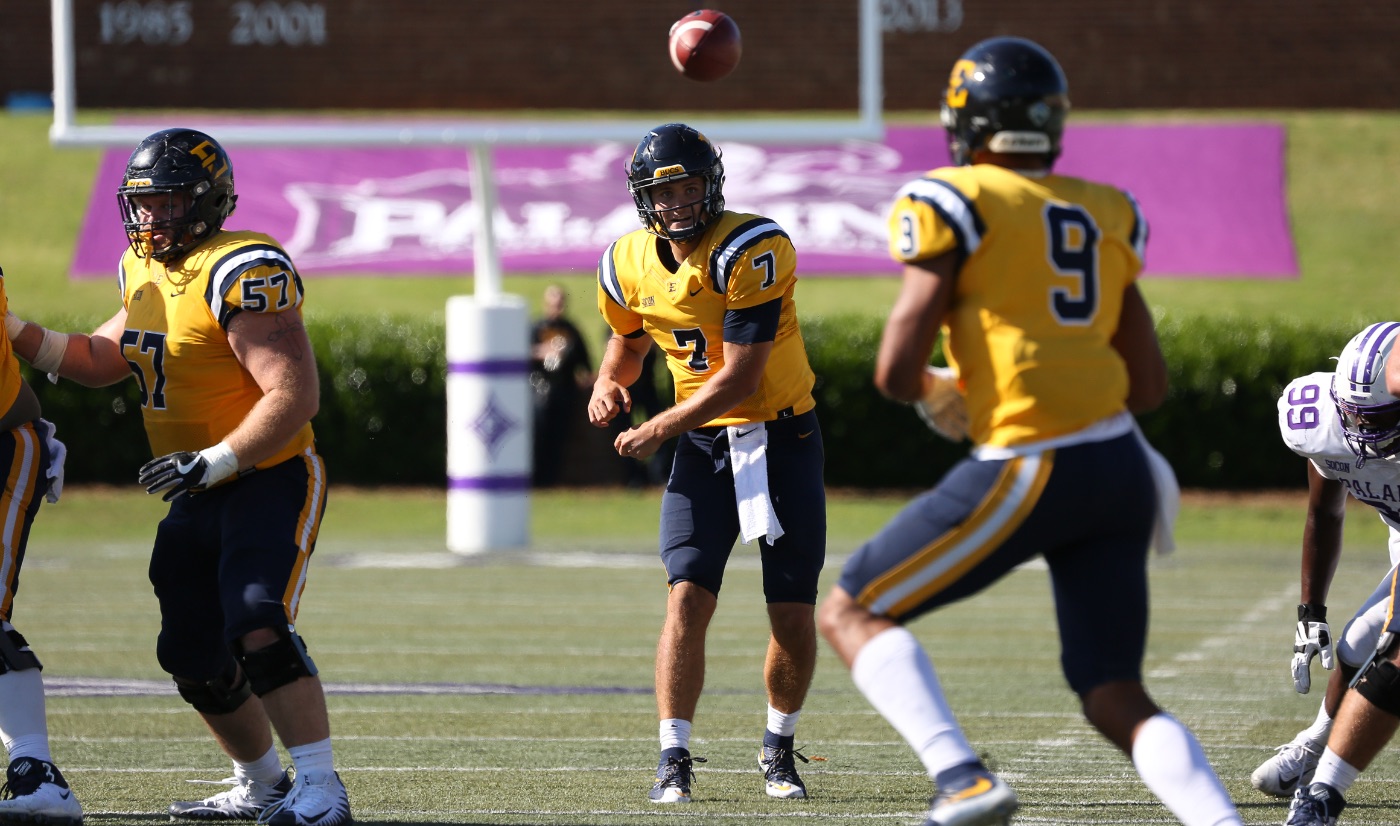 JOHNSON CITY, Tenn. (Sept. 30, 2017) – Austin Herink (Cleveland) did all he could against the Furman Paladins.

ETSU’s junior quarterback passed for a school record 434 yards and collected three touchdown tosses Saturday afternoon at Paladin Stadium, but after taking a 17-14 lead midway through the second quarter, the Buccaneers looked on as the Paladins scored 28 unanswered points and racked up 609 yards in total offense on their way to a 56-35 victory in a matchup of Southern Conference teams.

With the loss, the Bucs dropped to 2-3 overall, 1-2 in SoCon action, while Furman improved to 2-3, 1-1. ETSU will now return to Johnson City for Homecoming week and a matchup with Robert Morris at 3:30 p.m. next Saturday, Oct. 7, inside William B. Greene, Jr. Stadium.

Herink, who was this week’s SoCon Student-Athlete of the Week, became the first ETSU quarterback to eclipse 300 yards in a game since Carl Meadows did so on Sept. 4, 2003, in a matchup with Concord. He also moved into sixth on the Bucs’ all-time list with 4,213 career yards, passing former Buccaneer quarterback Mark Williams.

Despite Herink’s passing numbers, the Paladins’ defense did stifle the Bucs rushing attack, which only accounted for 22 of the ETSU’s 456 yards in total offense.

The game was a wild affair, with 91 total points and 16 total plays of over 20 yards or more. In fact, Furman finished with nine of those long offensive plays and scored on six of them, while the Bucs had seven plays over 20 yards and scored on three. The Paladins also had a 47-yard kickoff return for a touchdown on an ETSU on-side attempt late in the game.

Despite falling behind by 25 points at 42-17, the Bucs never gave in and rallied to pull to within 14 at 49-35 with just over seven minutes left in the contest. The game was also an improvement for the three-year-old Bucs’ program in terms of competitiveness, after having lost to the Paladins 52-7 a year ago in Johnson City.

ETSU returns to Johnson City for Homecoming next week, as the Bucs host non-conference foe Robert Morris at 3:30 p.m. on Saturday, Oct. 7 inside William B. Greene, Jr. Stadium.