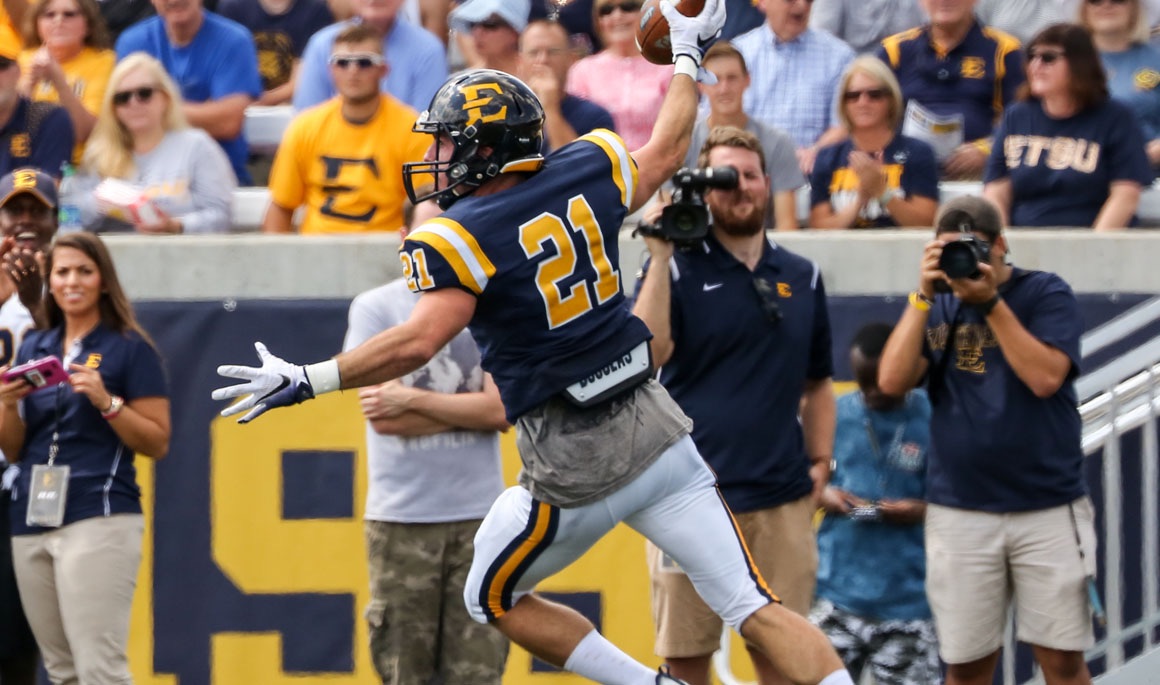 JOHNSON CITY, Tenn. (Oct. 6, 2017) – The ETSU football team will get to check another first off its list this Saturday.

For the first time in William B. Greene, Jr. history, the Buccaneers will host a Homecoming game as ETSU faces Robert Morris at 3:30 p.m.

Austin Herink passed for a school-record 434 yards, while his three touchdowns tied a career high, but it wasn’t enough to lift ETSU past Furman as the Paladins totaled over 600 yards of offense en route to defeating the Bucs, 56-35 … The Bucs had two receivers finish with over 100 yards – Vincent Lowe five receptions for 105 yards and two touchdowns; Hunter Wike – two catches for 101 yards, including a 78-yard touchdown reception … The 78-yard reception was the ninth-longest scoring pass play in school history … Marion Watson averaged 44.2 yards per punt – five punts for 221 yards … Watson landed two punts inside the 20, which included one inside the 10 (did not allow a punt return) … The Buccaneer defense forced a turnover for the 10th straight game when Blake Bockrath forced the fumble and Paul Hunter recovered to set up a JJ Jerman field goal in the second quarter … ETSU scored 18 fourth-quarter points, including posting scoring drives on three of its final four possessions … The Bucs went 4-of-13 on third down, while Furman went 7-of-12 … Furman was also 2-of-3 on fourth down with one touchdown … ETSU’s defense allowed nine plays of over 20 yards – six of which went for touchdowns … Furman registered 609 yards of total offense (308 rushing/301 passing), while scoring 28 unanswered points from the 4:02 mark of the second quarter to the 14:08 mark of the fourth quarter.

For the first time since restarting the program in 2015, the Bucs had two players finish with over 100 receiving yards in last Saturday’s setback at Furman … Vincent Lowe ended with five receptions for 105 yards, while Hunter Wike hauled in two catches for 101 yards, marking the first time two ETSU players had over 100 receiving yards in a game since Sept. 1, 2000, when Cecil Moore and Tim Turner accomplished the feat … Moore had four receptions for 138 yards and Turner added three catches for 145 yards (three touchdowns) as ETSU defeated Liberty, 37-20, in Lynchburg.

HERINK AIRS IT OUT IN GREENVILLE

Despite last weekend’s setback at Furman, redshirt junior quarterback Austin Herink broke ETSU’s single-game passing record with 434 yards … Herink – who became the first Buccaneer since Carl Meadows (Sept. 4, 2003 vs. Concord) to throw for over 300 yards in a game – broke Todd Wells’ record of 377 passing yards, which was set on 1997 in a 51-28 win over No. 6 Appalachian State in Boone.

Through five games this season, Austin Herink has already eclipsed his passing touchdown total from a year ago … Herink enters the weekend with nine passing touchdowns, while he threw for seven in 11 games last season … Herink has thrown for over more yards (1,257) in his first five games this year than he did in his first nine games last season … The Cleveland, Tenn. native – who earned SoCon Student-Athlete of the Week honors after guiding the Bucs to a 26-23 overtime win over Mercer on Sept. 23 – ranks 16th among FCS quarterback in passing yards, 22nd in completion percentage (64.4), 24th in passing touchdowns, 30th in points responsible for (64) and 32nd in total offense (259.4).

Austin Herink capped off his fifth career comeback win in the Bucs’ 26-23 overtime win over Mercer on Sept. 23 in Greene Stadium … Of the five comeback wins, three have either come in the fourth quarter or overtime.

Austin Herink found Hunter Wike on a screen play that resulted in a 78-yard touchdown last weekend at Furman … The 78-yard play was the ninth-longest scoring pass play in program history and the third longest pass play in the SoCon this season.

JJ Jerman was tabbed Southern Conference Special Teams Player of the Week following ETSU’s win over Mercer on Sept. 23 … Jerman – who made two of his three field goal attempts and both extra points – helped lift ETSU to a 26-23 overtime win over the Bears. The Seymour, Tenn. native connected on a 25-yard field goal in the second quarter, while his career-long 49-yard field goal with 11:22 remaining in the fourth quarter sparked the Bucs’ comeback. The 49-yard field goal marked the fourth longest in program history, and is the longest field goal by a SoCon kicker this season and tied for the sixth longest make among FCS players this year.

Redshirt junior linebacker Dylan Weigel earned Southern Conference Defensive Player of the Week honors following the week three game vs. The Citadel … Weigel recorded a game-high 19 tackles and one quarterback hurry in the Bucs’ 31-25 setback to then-No. 13 The Citadel at William B. Greene, Jr. Stadium. The 19-tackle game marked the most by a SoCon player this season, while ranking second-most among FCS players in 2017. Weigel totaled 11 first-half tackles against the Bulldogs, including seven in the second quarter.

Linebackers Dylan Weigel and River Boruff among Southern Conference leaders in tackles in 2017 … Boruff ranks third in the league in tackles per game (9.2) and Weigel is fourth (9.0) … Since 2015, both Weigel and Boruff are the top tackle leaders among ETSU players … Weigel has 278 career tackles in 27 games and Boruff has 168 in 26 games.

ETSU has forced at least one takeaway in each of its first five games this season ... Paul Hunter has two interceptions this season, which ties him for the most by a single player in a season since the return of the program in 2015, when former cornerback Tavian Lott reached that same number of interceptions ... ETSU has now forced at least one turnover in 10 straight games and in 20 of its last 23 contests.

Austin Herink did a tremendous job sharing the wealth with his Buccaneer receivers in the season opener against Limestone … Herink – who threw for 239 yards in the 31-10 win over Limestone – completed passes to eight different wide receivers … Senior Vincent Lowe led the group as he tied a career high with five receptions … Redshirt junior Drake Powell finished with three receptions, while Quan Harrison and Braxton Richburg both hauled in two catches in their first ever collegiate game … Herink also completed passes to eight different receivers the next week at James Madison … Overall, 16 different players have caught at least one pass this season … Of the 16 players, nine are wide receivers, three tight ends, two running backs, one full back, and Austin Herink caught a tipped pass for negative-2 yards against The Citadel.

BIG PLAYS FOR CASH IN FOR THE BUCS

ETSU’s offense has totaled 20 plays of over 20 yards this season … The Bucs came through with a handful of big plays in the season opening win against Limestone … Three of the Bucs’ four touchdowns came on plays 25 yards or longer … Austin Herink found Andrew Heyward for a 43-yard score on the opening series of the game, while following that up with a 45-yard strike to Anthony Spagnoletti in the second quarter … Herink capped off the touchdown plays when he connected on a 25-yard score to Vincent Lowe with 11:39 remaining in the third quarter … In total, the Blue and Gold had five plays go for over 20 yards (four offense/one kickoff return) … Last season, the Bucs only scored touchdowns on two plays over 20 yards – 69-yard touchdown reception to Drake Powell and 29-yard reception to Jajuan Stinson … This season, ETSU has scored on eight plays over 20 yards, including four over 40 yards.

Saturday marks the second all-time meeting between ETSU and Robert Morris … The Colonials rallied for a 21-9 win over the Buccaneers back on Nov. 7, 2015 in Moon Township, Pa. …. The Bucs jumped out to a 6-0 lead thanks to a pair of second-quarter field goals by JJ Jerman, but Robert Morris took a 7-6 lead into halftime when Craig Thompson scored on a five-yard touchdown pass from Mathew Barr with six seconds remaining in the second quarter … ETSU regained a 9-7 lead on Jerman’s third field goal early in the third quarter, and the Bucs led until the Colonials scored on an 84-yard touchdown pass to Kyle Buss with 3:18 remaining in the contest … After the Bucs turned the ball over on downs, RMU iced the game with a 12-yard touchdown run to make it 21-9 … Jajuan Stinson (71 yards) and Falon Lee (73 yards) combined for 144 rushing yards; however, Austin Herink was sacked six times for negative-25 yards and Nick Sexton was sacked three times for negative-26 yards … The Blue and Gold were held to 1-of-19 on third down chances as Marion Watson was forced to punt a career-high 10 times … ETSU totaled 236 yards on offense (134 passing/102 rushing), compared to Robert Morris posting 322 yards (225 passing/97 rushing) … Dylan Weigel finished with 11 tackles (one sack), Austin Gatewood added eight tackles (2.5 sacks) and Trey Quillin added 1.5 sacks.

ETSU returns to conference play next weekend as the Bucs head to Cullowhee, N.C. to face No. 22 Western Carolina … Kickoff is set for 3:30 p.m. at E.J. Whitemire Stadium.