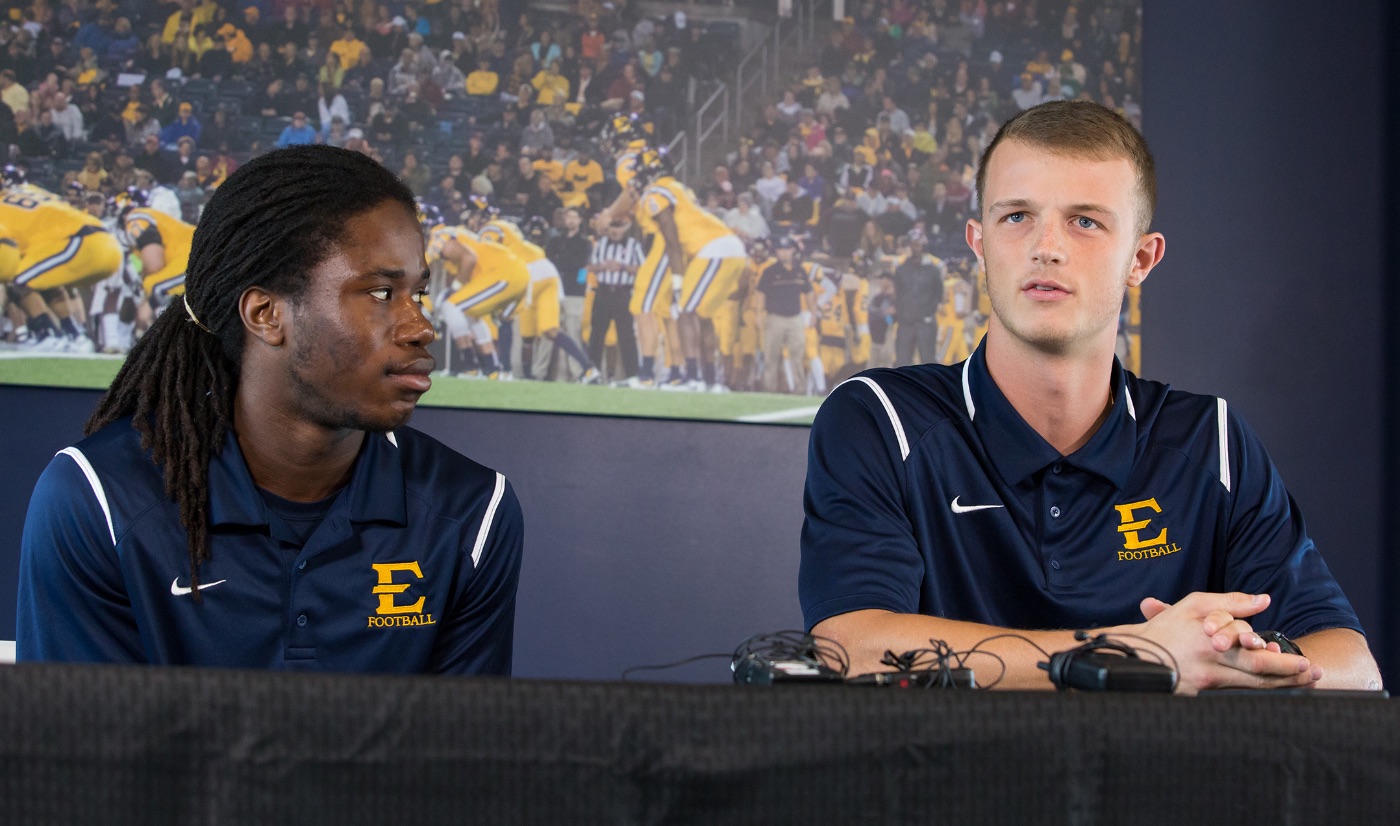 Below are comments from Coach Torbush, Kelley, and Ardis.

It was an exciting weekend. There is no better way to end the weekend than to have a victory on Homecoming.

If you look at all the things that happened on Friday with the Homecoming parade, the fireworks after the parade, both soccer teams played at home, volleyball was at home, there was just a lot of excitement on campus this weekend. I think all of our alumni, former players, and fans that love ETSU and ETSU Football, enjoyed themselves a great deal. It was a lot of fun. Like I told the players, it would not have been as much fun if we did not won the football game.

We beat a good football team. Defensively, they are as good as a lot of the teams that we're going to play against. Offensively, we did a really nice job of maintaining pressure, and I do feel like defensively, we came out strong from the start. Our guys had something to prove because they felt like the week before we did not play up to the best of our ability... And quite honestly, I agree with them. I thought this past week there were a lot of big hits. If you look at the number of hits that we got on the quarterback, it really affected him in the fourth quarter.

We had a lot of guys that played extremely well. We would have loved to come away with a shutout, but any time you hold your opponent without a touchdown, you feel like you've done a pretty good job. It was a really good game for our players, because we were able to bounce back from Furman and get back to .500 on the season. Now we have to get ready to take on a very talented Western Carolina team this weekend.

Western Carolina is a different animal. They are totally different from what we saw last week. Right now, they are knocking the digits off the scoreboard. They are scoring points quickly and a lot.

They have played some really good football teams. They got beat by Hawaii and got beat last week at Wofford in a tough game. That was a heart-wrenching loss for them. Between those losses, they were able to beat Davidson, Gardner-Webb, Samford, who was ranked 17th at the time, and Chattanooga.

They will be as athletic as any team we play all year. They are averaging right now 500 yards and just around 40 points per game on offense. They're averaging about 250 rushing and passing, so they can throw it and run it. They are as balanced as you can possibly be. Detrez Newsome, it seems like he's been there forever, but he’s an outstanding running back who has done a really nice job for them year in and year out. He's a player that we have to worry about in the backfield. Their other running back is just about as good as he is, so we also have to be aware of him.

They are playing with a great deal of confidence. Their quarterback is truly an outstanding player. I thought he was really good last year, but I think he's even better this year. He throws the ball exceptionally well. He's a guy that if we don't take care of him, then we will have some problems on Saturday.

They return the majority of their offense from last year and have seven starters back on defense. They have a lot of guys back. There is no doubt in my mind that they remember what happened last year at Bristol. I'm sure they are harping on that right now.

Coach Speir is a very close friend of mine. He has done a great job at Western Carolina to get them to keep coming back. He's taught them how to fight. If you look at them as a football team, they're playing very solid defense right now. Obviously, they can score all over the field on offense. They have a very diverse offensive scheme, and they have skill guys at the wide receiver and running back positions that can make things happen. Then if everything else breaks down the quarterback takes off. He is an outstanding runner. He runs quarterback draws. He runs quarterback sweeps off an empty set, and does a lot of things there.

They will be, in my opinion, one of best true conventional offensive schemes we will play. They can run it. They can throw it. They have outstanding athletes, and when they get the ball in their hands, they make the plays happen.

We know it's going to be a tough battle. Every game in this conference is tough week in and week out. The SoCon is to FCS like the SEC is to FBS.

I don't think there's any doubt that Western Carolina is excited about having us come back to Cullowhee, North Carolina for the first time since 2002. It’s been a long time since we've been down there.

They'll have a full house; I have no doubt about that. At the same time – we talked about it yesterday – our players will be and need to be excited about going down there. We need to make sure we do what we did last year, and what we plan to do this year, which is have a chance to win the ballgame going into the fourth quarter. A lot of people probably don’t give us a chance to go down there and win, which is fine with me, but we know it will be a challenge and we will be ready to compete.

They are playing with more confidence right now. They have, in my opinion, more skill athletes even though they had a lot of these same skilled athletes last year. They're making plays. They have two key wide receivers that can make big plays and run with it after the catch. They have two running backs that run very well. They got a quarterback that can run it, throw it and make things happen if everything is covered. They also have a punter that can change the field position, and defensively they are playing much better than they were last year.

To me, the red zone is different. When we get inside the 10, we do not want to come out of there with field goals. If we are in the 25 to 30 – kind of in that long-range red zone area – then we want to make sure we get points out of that trip. Last week we didn't do either one, because we made a couple of field goals, missed one, and got a couple blocked, which wasn't good. If it gets inside the five (yard line), we need to be able to put it in the end zone.

We're not built like that. Obviously, as a head coach, I'm not built like that. I do feel strongly that you have to have a running game. If you don't have a running game, you better have three or four quarterbacks because at some point, that quarterback is going to get nailed. If you look at the last two games, Austin got nailed a couple times that could put him out. Austin is as tough as you'll find and he's been a great leader, but the more those quarterbacks get hit – just like Robert Morris’ got hit last week – then pretty soon that's going to take some confidence away from them. We are going to keep working on our run game until it does develop. We feel like we have the players to make it happen.

ON HIS BIG GAME AGAINST ROBERT MORRIS

The whole week leading into the game, Coach Rader really told us that their outside guys were going to be extremely physical, so we felt like it was going to open up a lot of stuff underneath and across the middle. He told us if our number was called to just be ready. Vinny (Vincent Lowe) and Drake (Powell) did a really good job tying up those corners outside, so when we did get over into their zone on the crossing routes, they were open, and we just had to make some plays.

ON MAKING A LOT OF SLIDING CATCHES; IS THAT SOMETHING YOU PRACTICE EACH WEEK

Austin has a lot of trust in us to make those kind of catches. When he puts the ball anywhere around us, we are expected to catch the ball. I wish I could've stayed on my feet, but I am willing to do anything to make a play.

Coach Rader emphasizes going down and getting the ball if it's necessary, but we obviously want to stay on our feet in practice and prevent injury as much as possible. But when the ball is around us, we do our best to come up with the catch any way possible.

We have several different types of route runners – especially in our group. I feel like that's pretty well known amongst the teams we'll play. On the outside Drake and Vinny run extremely good routes, and Coach Rader subs a lot, so we're always fresh on the field. I feel like that presents challenges for the opposing defensive backs. Coach Rader will throw anybody out there at any time. We just have to be ready.

ON PREPPING FOR WESTERN CAROLINA

I think they will definitely be ready for us after what happened last year. We kind of surprised them in Bristol. I think they're going to really try to come out and start fast, and try to put up a lot of points against us. We have to do a good job on defense to try to and limit that.

They run a lot of RPO's, so we are going to have to really play well with our eyes this week, so that will be a big point on defense. We have to watch a lot of film and see how they run their offense. They should be similar to last year, so playing them last year and knowing their scheme, should help prepare us for this week.

ON BEING ABLE TO STOP WESTERN CAROLINA’S PASSING GAME

We just have to do a good job watching film this week, and studying what they like to do in certain situations. We need to be aware of who they like to throw to on third down, who their top receivers are. We have to be ready for every situation.

ON BEING FAMILIAR WITH WESTERN CAROLINA QUARTERBACK TYRIE ADAMS

Yeah, we are both from Florida, and I actually played basketball with him in the summer in St. Petersburg. We kind of talked about what happened last year. I know he's really excited about us coming there and playing them.

I recognized him on the court and he looked really familiar… I asked him, "Do you play football?" And he was like, "Yeah, I play for Western Carolina." And I was like, "You remember me? I'm number 25." I sacked him in last year’s game. I was actually guarding him when we were playing basketball, so we had some words during that, too.

He's very athletic. He can really jump and dunk. He also has great speed as a quarterback and is a great passer.

HOW GOOD IS TO BE 3-3 AT THIS POINT IN THE SEASON?

It feels good. I think this is the best start I've had since we've been here, so it feels good to have an even record instead of a losing record. We are making progress and staying in a lot of games this year. We have to continue working hard and getting better as a football team.