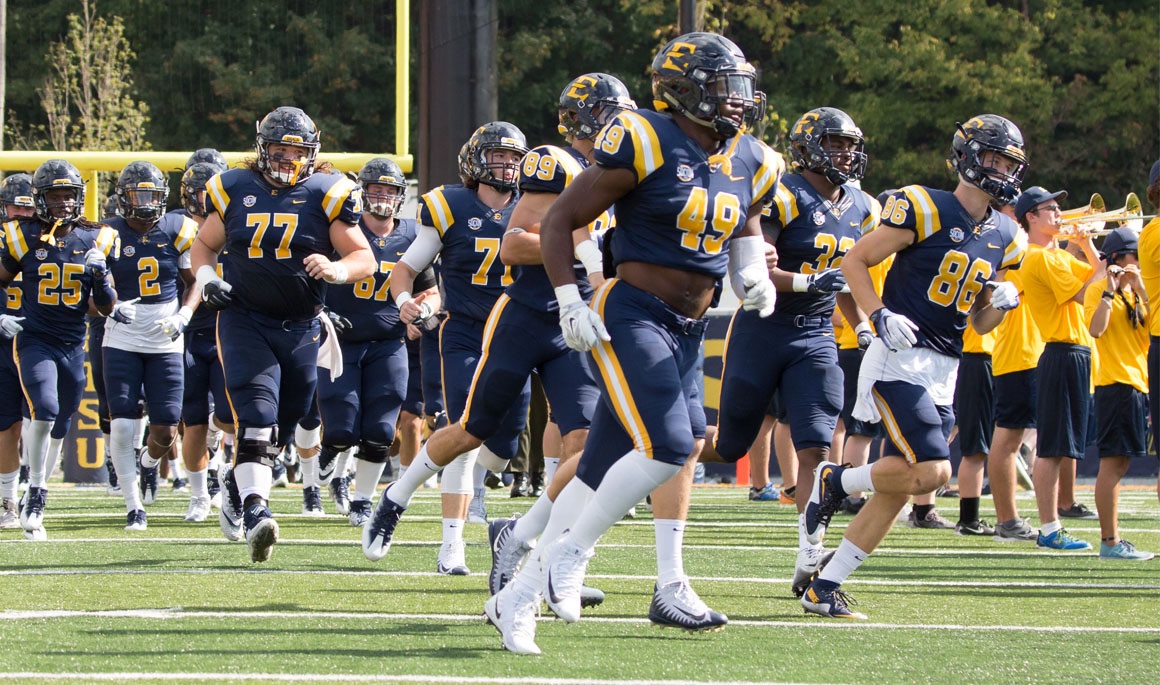 JOHNSON CITY, Tenn. (Oct. 26, 2017) – Coming off its open week, the ETSU football team returns home to take on No. 8 Wofford Saturday afternoon at William B. Greene, Jr. Stadium. Kickoff is set for 1 p.m.

Student Tickets Still Available – Students are reminded that they can continue to order their free ticket to Saturday’s game with Wofford on-line at ETSUBucs.com or can pick up their ticket at the Bank of Tennessee East Gate on Saturday.

Ford Super Screen – After making its debut during the inaugural game at Greene Stadium back on Sept. 2, the “Ford Super Screen” will return to Lot 21 this Saturday. Beginning with coverage of ESPN’s College Game Day, the LED screen will broadcast nationally-televised games from around the country throughout the day.

1987 Football Reunion – Members of the 1987 team will be invited back to celebrate the 30-year anniversary of the team’s upset win over Atlantic Coast Conference foe N.C. State. … Back on Nov. 7, 1987, the Bucs ruined the Wolfpack’s Homecoming weekend by winning that game 29-14. … Making the day more special is that the Bucs’ head coach that day, Mike Ayers, is the head coach at Wofford and will be on hand to share in the celebration with his former players.

Pink Game – The Bucs will wear pink accents on their uniforms this Saturday to show their support for the fight against breast cancer and recognize Susan G. Komen of East Tennessee, which works to battle the disease.

No umbrellas – With rain in the forecast, fans are reminded that umbrellas are not allowed inside Greene Stadium. Ponchos are recommended.

Tailgating – Parking lots around William B. Greene, Jr. Stadium will open for tailgating at 8 a.m. on Saturday morning.

Buc Walk – The traditional Buc Walk will take place two hours and 15 minutes prior to kickoff, so Saturday’s walk will begin at 10:45 p.m.

Clear Bag Policy – The new stadium has a clear bag policy, which can be viewed in more detail by clicking here. Clear bags will also be available for purchase at the game.

Prior to their bye week, the Bucs suffered a 49-10 setback to then-No. 21 Western Carolina on Oct. 14 in Cullowhee, N.C. … Falon Lee rushed for a career high 85 yards and averaged 5.3 yard per carry … The Bucs rushed for 137 yards against the Catamounts, marking the second time this season ETSU eclipsed the 100-yard mark … ETSU’s defense held Tyrie Adams to 14-of-27 with 83 passing yards and one touchdown, while sacking him three times … Haddon Hill caught his second career touchdown pass, as he hauled in a 10-yard reception on a 4th-and-3 play in the fourth quarter … The Bucs limited the top scoring team in the SoCon to seven points and 126 yards in the first half … Blake Bockrath recorded a sack for the second straight game … Austin Herink completed passes to eight different players … After getting injured in the 2016 season opener at Kennesaw State, offensive lineman Greg McCloud made his first appearance since that injury as he saw snaps at right guard in the second half.

With head coach Mike Ayers bringing his Wofford Terriers into Johnson City, the ETSU Department of Intercollegiate Athletics is honoring the 1987 Buccaneers at today’s game ... The 1987 team, coached by Ayers, picked up a signature win that season as ETSU knocked off NC State, 29-14, on Nov. 7 in Raleigh ... Despite falling behind, 7-0, in the first quarter, the Bucs rattled off 21 unanswered points en route to capturing the 15-point win ... The Bucs were out-gained 317-298, while NC State ran 31 more plays and forced ETSU into six turnovers (five fumbles, one interception) ... The Buccaneer defense accounted for nine points as Rick Harris returned an interception 56 yards for a score and the Bucs also recovered a fumble for a safety ... Quarterback Jeff Morgan was 9-of-19 for 127 yards, while rushing for 68 yards and accounting for three touchdowns (two rushing, one passing) … That season, Morgan, Harris, David Berline (offensive lineman) and Cedric Solomon (wide receiver) all earned Southern Conference honors … Morgan threw for over 1,600 yards and 13 touchdowns, while rushing for over 550 yards and seven scores … Harris totaled 58 tackles and seven interceptions, while Solomon led the Bucs with 36 receptions and 639 receiving yards … Thane Gash – who was drafted in the seventh round by the Cleveland Browns in 1988 – led the Blue and Gold with 133 tackles … Former Buccaneer linebacker and current Defensive Coordinator Billy Taylor totaled 59 tackles, five pass deflections, an interception and a fumble recovery in 1987.

CLICK HERE FOR BOX SCORE OF THE NC STATE GAME

WEIGEL CLOSING IN ON MILESTONE

Redshirt junior linebacker Dylan Weigel is closing in on a personal milestone … Weigel – who has started all 29 games in his collegiate career – has totaled 288 tackles … Weigel is 12 tackles shy of posting career number 300 … The Pickerington, Ohio native is looking to become the 11th player in program history to record 300 tackles in a career.

Redshirt junior quarterback Austin Herink is also eyeing a milestone of his own … After becoming just the sixth player in program history to record his 400th career completion at Western Carolina, Herink is also looking to reach 5,000 passing yards … The Cleveland, Tenn. native is 158 yards shy of reaching 5,000 yards of total offense for his career, which would make him the sixth player in school history to accomplish that mark.

A Buccaneer win over Wofford would mark their first win over the Terriers since 1998 when ETSU cruised to a 45-24 win in Johnson City … It would also mark ETSU’s 344th victory in program history as well as giving the Bucs a 14-12 series lead … It would also be the second straight year the Bucs knocked off a ranked opponent, while marking the highest win over ranked foe since defeating No. 1 Georgia Southern, 19-16, on Oct. 27, 2001.

ETSU leads the all-time series, 13-12, but Wofford has won the last six meetings … This marks the 14th game played in Johnson City with ETSU holding a slight 7-6 advantage … Wofford blanked the Bucs, 31-0, last season in Spartanburg … ETSU’s last win over Wofford came in 1998 when the Bucs cruised to a 45-24 win in Johnson City … Wofford’s six-game win streak over the Blue and Gold marks its longest streak in the series, while ETSU won five straight from 1962-66 for its longest in the series … The Bucs’ largest win all-time against Wofford was a 52-3 victory in 1986 – the 52 points also mark the most by ETSU over the Terriers ... Last season, in the 31-0 setback in Spartanburg, the Bucs were held to negative-7 yards rushing and five first downs ... Overall, ETSU totaled 76 yards of offense (83 yards passing), while Wofford posted 350 of its 364 total yards on the ground ... Wofford held the ball for nearly 40 minutes of the contest, while the Blue and Gold did not move the ball into Terrier territory ... Austin Herink went 14-of-22 for 80 yards and was sacked three times ... The Buccaneer defense finished with 103 tackles, one sack and seven tackles for loss, while Wofford ran 33 more plays than ETSU, 75-42.

The Buccaneers wrap up their home portion of the schedule next weekend when ETSU hosts VMI ... Kickoff is set for 3 p.m. at William B. Greene, Jr. Stadium.