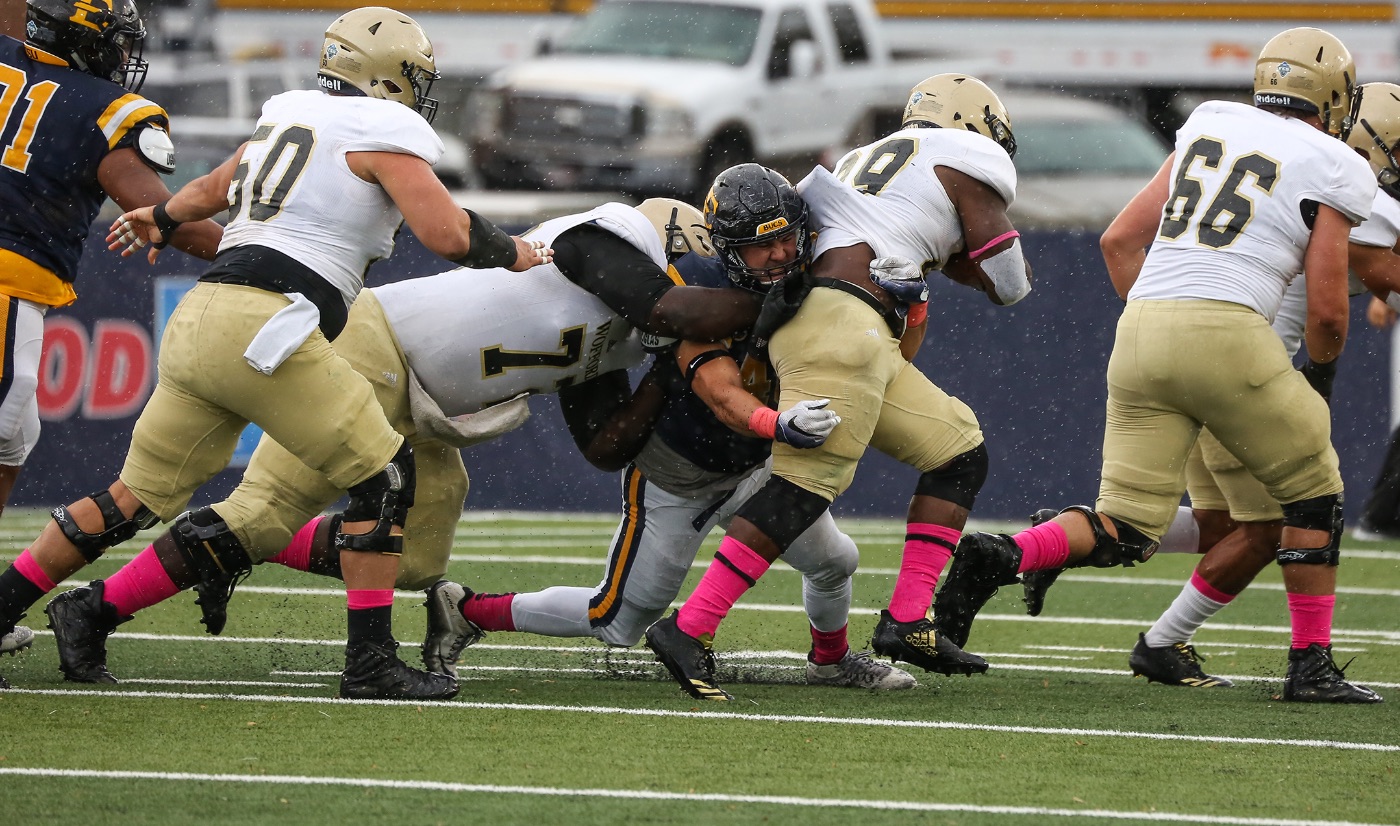 JOHNSON CITY, Tenn. (Oct. 28, 2017) – For the second time at home this season, the ETSU football team had the ball with a chance to win on the final possession against a nationally-ranked opponent. But once again, that opportunity literally came up just short.

Trailing by a touchdown, the Buccaneers faced a fourth down play and needed one yard at the Wofford 23-yard line with 45 seconds left in regulation, but junior tailback Jajuan Stinson (Knoxville) lost his footing on a run that looked destined for a first down and came up shy of the line to gain. With that play, the No. 8-ranked Terriers escaped William B. Greene, Jr. Stadium with a 31-24 win in Southern Conference play on a soggy Saturday afternoon.

With the win, Wofford remains atop the SoCon standings with an overall 7-1 record and 5-1 mark in league play. Meanwhile, ETSU dropped to 3-5, 1-4. After Saturday’s loss, four of ETSU’s five defeats have come to teams ranked in the Top 25, including No. 1 James Madison, No. 13 The Citadel, No. 21 Western Carolina and No. 8 Wofford.

An announced crowd of 7,087 looked on as the Bucs put together a valiant effort in a game that featured three ties. In fact, ETSU fell behind by a score a 31-17 early in the fourth quarter before putting together its late rally. The game was another example of the Bucs’ continued improvement in year three of the program reboot, as the Bucs suffered a 31-0 loss to these same Terriers a year ago.

For the game, Wofford outgained the Bucs 302-15 on the ground, but ETSU held a 262-100 advantage through the air. The Terriers did not commit a turnover, while the Bucs lost a fumble in a critical moment in the game, a play that ultimately set up Wofford at the ETSU 6-yard line and resulted in an easy score.

Offensively, junior quarterback Austin Herink (Cleveland) was 23-of-34 through the air for 262 yards and a pair of touchdown passes, while senior wide out Vincent Lowe (Chesapeake, Va.) had a game high six receptions for 65 yards and fellow wide receiver Drake Powell (Clinton) had five catches and a score. Hunter Wike (Canton, N.C.) accounted for the other score as he hauled in a 27-yard touchdown reception on a third down play in the second quarter.

The Bucs will return to Greene Stadium next Saturday, Nov. 4 for their home finale against VMI. Kick is set for 3 p.m.