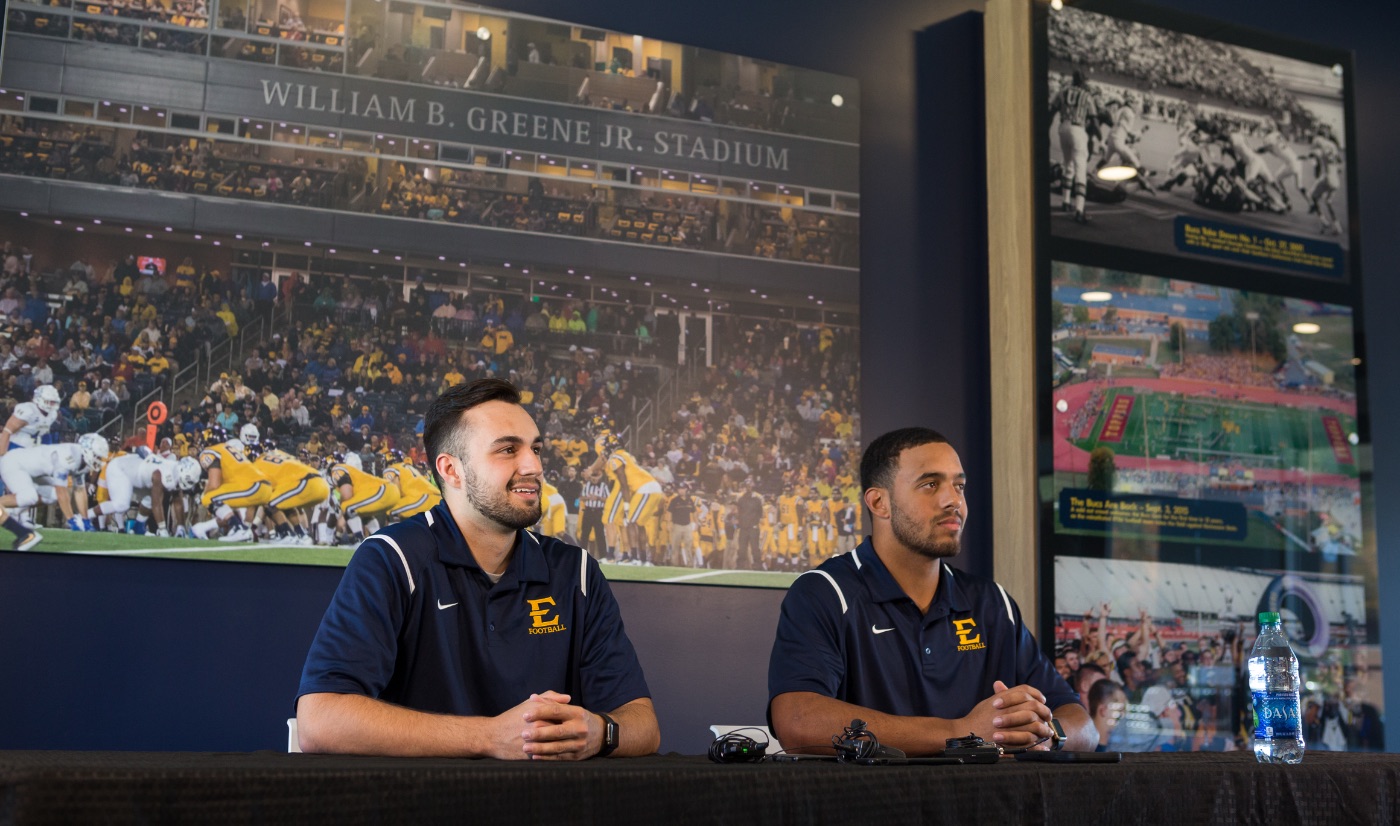 JOHNSON CITY, Tenn. (Oct. 30, 2017) – The ETSU football team held its weekly press luncheon to recap last Saturday’s game with No. 8 Wofford and preview this weekend’s home finale versus VMI. Kickoff for Saturday’s game is set for 3 p.m. at William B. Greene, Jr. Stadium.

Below are comments from Coach Torbush, Powell and Jerman.

VMI lost a lot of good football players from last year. They may have struggled a bit so far this year, but they are very well coached. We cannot take anything for granted. We are not far enough in our program to take anybody for granted. I felt like going into last year's game that there were a lot of things going on that week, but I felt in my heart that that was the game that we had a chance to win if we played well, and we didn't. We didn't really have a chance to win, which is not very good.

Our players understand that VMI gave us a pretty hard loss last year, one that was tough on our football program. But this is another great place for us to see where we at. They lost some players, we didn't lose any players, and we're at a point in the season where we need a win.

Even though VMI’s record doesn't show it, we're playing a very solid football team that is very dangerous. For us to get to where we want to be in SoCon, this is a game that we need to win this week.

This is a game that our players should be excited about. It's our final home game of the season and we need to end on a positive note. We have several guys that we are going to be honored prior to the game, as it will be their final home game. We have several guys that may not come back for a fifth year, and that's going to happen in FCS football. But at the same time, to see where we have gone in four years is really a testament to all the work they have put in both on and off the field. The guys that have been here for four years didn’t have a home field or weight room when they got here. Now they have both and they are some of the best facilities on our level. Over that time, we have come a million, million miles.

This should be another good home football game for us and it's a game that we need to win. We obviously had a chance to win last week. Our goal is to make our home field a very, very tough place to play. We have a lot of things on the line this week. To have a winning season, we have to win this week. It's that simple. We can't afford to lose another one, but you can't win three before you win one. We know our players understand that. I think we'll have a really good week of practice and we're excited about playing this weekend.

ON USING LAST YEAR’S RESULT VS. VMI AS MOTIVATION

I will bring it up a few times because like I say, I felt going into the game last year that that was a game that if we played our best game that we had a chance to win. We knew VMI was a good team, but I felt at that point in the season, where we were, that we had chance to win. Obviously, we didn’t get the job done and that was very disappointing.

I don't think we took them for granted and we can’t take them for granted this year. I feel they will come in thinking they can win this game, so we have to play up to the best of our ability to give ourselves the best chance to win.

ON WHAT SURPRISED YOU MORE IN LAST YEAR’S LOSS TO VMI – THE 37 POINTS ALLOWED OR SEVEN POINTS SCORED?

Quite honestly, both surprised me. I felt like our defense would have played better than we did, and I felt like our offense was clicking at that time of the year that we'd score more than we di. Overall, we just didn't play very well in all phases. But VMI gave us a good whipping, and we'll always bring that up as motivation.

JJ has turned into, in my opinion, one of the best, if not the best kickers in the SoCon and one of the better ones in the country. He has been very consistent in PATs and any time the ball is inside the 50, JJ knows to let me know how far, and he will get the job done.

HOW MUCH DO YOU FEEL LIKE THE IMPROVEMENT THIS YEAR IS DUE TO NOT ONLY THE TEAM BEING BETTER, BUT THE NEW STADIUM HAVING AN IMPACT WITH YOUR TEAM PLAYING SO TOUGH AT HOME AGAINST EACH OPPONENT?

I think number one our team is better. It wouldn't matter if we were playing at Kermit Tipton or wherever it may be, but obviously we love playing in our home facility. I think our fans enjoy it. The atmosphere is better for us because it's on campus. I hate that two of the games have been misty or rainy and all that, because I do feel that has hurt the crowd some, even though I think we've had great fan support throughout. But we're just a better football team. We have the same guys back, so we should be better. There's no doubt we have a great facility to play in. In my opinion, we have done at home what we need to do… that's protect our home base. However, moving forward, we want to get in a position where we have a long ongoing winning streak at home.

Yeah, it's always hard. Like I said after the game, it's almost harder than not getting the ball thrown to you the second half because in the first half, you're kind of getting into the groove of the game. So, the first half it was just kind of playing chess with them, seeing what they were going give us, what kind of coverage we were going to see if they're bracketing, anything like that. At halftime, Vinny (Vincent Lowe) came up to me and said, "Hey, stay in character here. We all know you haven't got the ball thrown to you yet. " I didn't really realize it at first, and then I came out the second half, and they started finding me a little bit, and it took off from there.

VMI HAS GIVEN UP A LOT OF PASSING TOUCHDOWNS THIS YEAR; DOES THAT MOTIVATE YOU HEADING INTO THIS GAME?

DOES THE FACT VMI BEAT YOU BY 30 POINTS LAST YEAR GET INTO YOUR HEAD SO IT DOESN’T HAPPEN AGAIN THIS YEAR?

It’ll always in the back of our mind, because they put it on us last year. We want to see if we can return the favor.

ON HIS 51-YARD FIELD GOAL ON SATURDAY

Honestly, it felt pretty great. I haven't really hit a ball all that well this season until this game. When you hit a good ball you don't feel it. When I watched the film afterwards, I didn't realize how far I made it by. That was definitely promising. That make helped me. It helps my confidence for any longer field goal attempts in the future.

ON THE RANGE YOU FEEL COMFORTABLE WITH

I feel pretty confident with anything from 57 yards in. If there's a little bit of wind, I can go back a little farther. I'm always watching the wind. If the wind is perfect, I could see possibly a 60-yard make.

WITH ALL OF THE SUCCESS YOU HAVE HAD, DO YOU THINK ABOUT PLAYING PROFESSIONALLY?

I didn't really think about it much until this year. Now that I realized I have become stronger I may see what can happen after I am done here at ETSU. I still have the rest of this season and all of next year, but it's something I would want to pursue if the opportunity arises.

ON WHAT YOU REMEMBER FROM LAST YEAR’S GAME WITH VMI

We had some stuff going on last year, but we went into the game expecting to win like we do against any opponent. It was just surprising to see the score at the end of the game. I'm not going to blame rain or anything like that, but that was a new situation we dealt with last year. We just have to go into every game ready for any situation no matter who we are playing.

ON PLAYING THE FINAL HOME GAME IN THE INAUGURAL SEASON AT WILLIAM B. GREENE, JR. STADIUM

It’s been awesome to play in our stadium. We are very thankful that we got to play at Science Hill, but to have your own stadium; you really can't put it into words. This is something that we have worked for. We put in a lot of blood, sweat, and tears. To come out here every day for practice, you always feel a little flutter of excitement. We want to protect our home, which makes these games important to us.