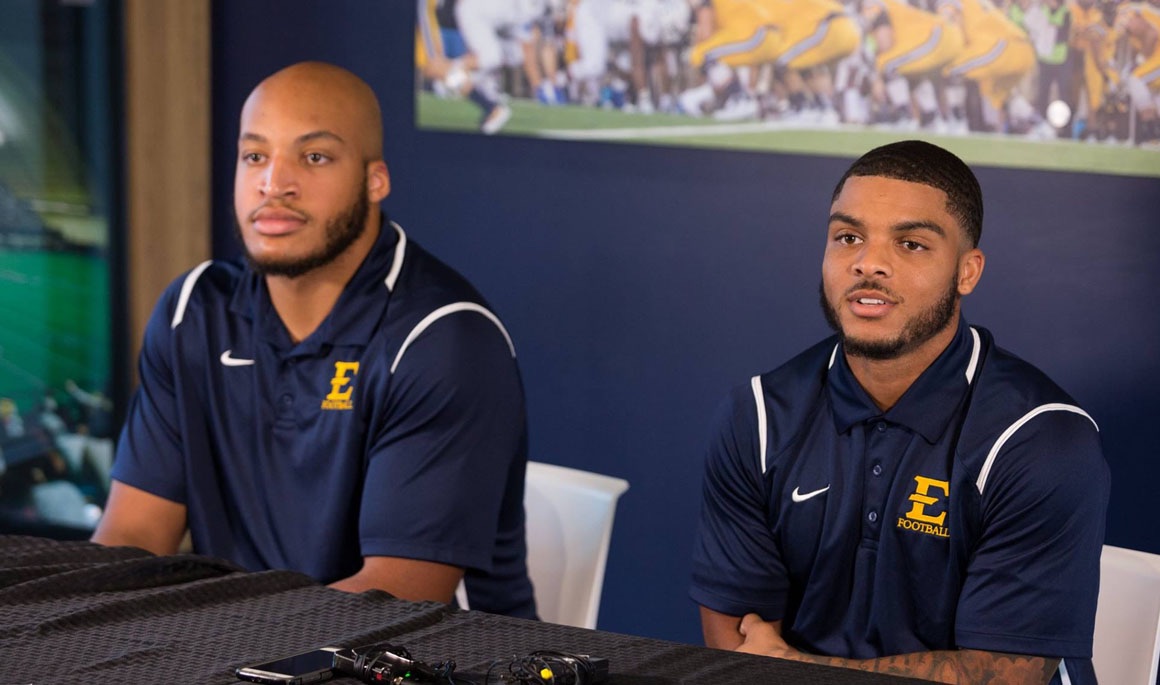 Below are comments from Coach Torbush, Player and Lowe.

Saturday was a great win. It’s always good to have a win, especially at home and in your last home game of the season. It’s hard to imagine that we've already played a home schedule at ETSU this year. It seems like yesterday we were playing Limestone in the first game of the season. I am very excited about our fan support. The fans have given us a home field advantage, and that's what we wanted.

Obviously, we needed that win last Saturday. It was a hard fought win. VMI's has a solid football team. They have kind of been snake bitten this year and lost some games they had a chance to win, but I thought our guys continued to play well throughout the game and did some things that we needed to do to have a chance to win.

We have played the eighth toughest schedule in the nation. We have played five teams that have been ranked the top 25, and we will play our sixth one this week against Samford. We have been tested, but we are looking forward to these last two football games.

It's going to be tough year in and year out, but that's just the way it is. Playing in the SoCon makes it be that way, because there's always going be three or four teams in our conference that are ranked. Then, when you play out of conference teams like James Madison – who's ranked number one in the country right now – that makes for a tough grind. For our players, that is why they came here. They wanted to play against the best, see how good they could be, and I think they've been able to do that. We have been competitive week in and week out, and I am excited about that and the future of our program. We have lost some close ball games that we would've liked to win. Our players have done a really, really good job of bouncing back week after week, after a tough loss, but the VMI game being our last home game this season was a very rewarding game.

This Samford team is the same type of football team that we saw last year. Coach Hatcher does a great job of scheming things on offense. He played under and coached with Mike Leach back is at Valdosta State. It's one of those offenses, if you weren't playing them, you'd be excited about watching them play. But they do a lot of nice things and they have a good football team.

They have very good athletes and a lot of the same guys back that they had last year, especially the quarterback, Hodges, who was player of the year in our conference last year. He throws the ball exceptionally well, has a lot of confidence in himself and a lot of composure. He makes things happen, so we know we have our hands full.

They are averaging over 400 yards a game on offense, and they're giving up quite a few yards on defense. But, if you watch them on defense, they have a very good defensive football team.

They are ranked in the top in the conference and also in the nation, basically in every area of passing. As long as Coach Hatcher has been there, they have been one of the top ranked teams, not only in SoCon football, but FCS football as far as throwing the football.

Defensively, they have a lot of guys back. I think the biggest thing is they got 14 starters back from last year (seven on defense), and I just got done watching last year's film, and you're seeing a lot of the same numbers. So, they've got a lot of those guys back. They can force turnovers and get stops, so we need to be smart with the football and move the chains. That’s what we were able to do last year and we need to do the same thing this weekend.

They obviously play very, very well at home. If you look at their stats, they've got some streaks down there that, if you look at them, are a little bit scary. They are 28-9 at home since 2011 and they haven’t lost back-to-back home games in a couple of years.

ON SAMFORD HOLDING HOMECOMING THIS WEEKEND

I thought it was pretty interesting that Samford’s Homecoming is this weekend. Most teams don't have their Homecoming in the 10th game of the season. Samford is, so we are their Homecoming game. I reminded our players of it, and I'm sure there's a reason for that, but it's an exciting time to go down there.

A bunch of our guys have not been to Samford, so we're getting ready to go to into a hostile environment. Samford’s team and fans are going be pumped up because of what we were able to get done last year. We know we have our hands full, but I do feel really good about our football team right now. I think we're playing with great confidence, I think they're playing hard, I think we are maturing, and we are getting better as a football team.

ON THE CHALLENGE OF PLAYING ANOTHER RANKED OPPONENT

I think it's a great time for us to be playing Samford. We are nearing the end of the season, and I think it gives us a chance to see how much improvement we have made on both sides of the ball.

Last year, we did exactly what we needed to do to win that football game. We ran a lot of time off the clock. We were very patient with what we did. Defensively, we didn't get bent out of shape. We gave up a few plays but not very many. What we wanted to do was go into the end of the ball game having a chance to win. Obviously, that's exactly what we did.

There is nobody on our football team that practices harder than Nasir Player. I watch him, and he doesn't know I'm watching at times, and he has great effort and a great motor all through practice. He's practicing for a purpose, and how he practices is exactly how he plays. And by doing that, I think he's become a really good role model for a lot of the other players, because they say, "Hey, Nasir ... he's playing like he's practicing, so if we practice as hard as he does, then we're going to be as good as we can be, as well."

In a two-year period of time, there is not a young man who has grown more both on and off the field and since I've been coaching, than Vincent Lowe. He's gone from a very competitive person, trying to make a point when he got here, to being a very competitive person to becoming one of the best leaders we have on this football team. He's been a very, very solid leader for us this year and I'm very, very proud of him.

ON HIS INTERCEPTION FOR A TOUCHDOWN AGAINST VMI

It was exciting. I went back and looked at the video, but at this point, I'm ready to play Samford this week.

They put up a lot of yards, but like I said, we played them last year, so we just have to be ready to play. We are ready to get to the game plan, ready to have a good week of practice, and see what the coaches have in store for us, so we can try to limit that number and come out with a win.

ON FACING SAMFORD FOR THEIR HOMECOMING GAME

As a whole, the defense has to make sure that we keep him contained. Because, like you said, he's not really that big of a runner, but he can make stuff happen with his feet. As long as everyone plays with the right leverage and does what they're supposed to do, then that shouldn't be a problem for us.

ON WHAT HE REMEMBERS ON LAST YEAR’S WIN OVER SAMFORD

It was pretty much us being men and competitors. It was the last game of the season. The weather was bad and there were barely anybody in the stands, so we pretty much had to play for each other. That’s all you need at this level. We came out with the right attitude and got the job done.

I wouldn't say it puts more pressure on us. I feel like every week we just have the same mindset, to go out there and do what we do as a unit. We really don't let anything put pressure on us at any time.

We have a tremendous frontline that's really grown, matured and stepped up this year, so that has helped us with the passing game, and also the running game. I feel like on the offensive side of the ball, we should move the ball very well against them.