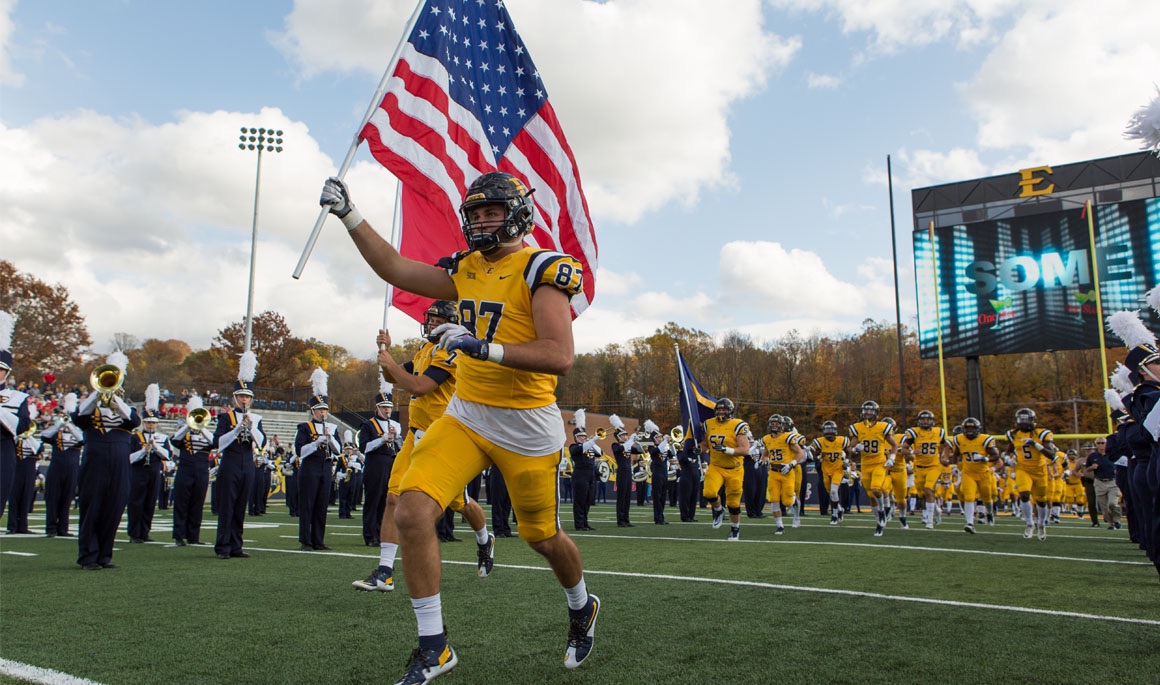 BIRMINGHAM, Ala. (Nov. 10, 2017) – After ending its home portion of the schedule with a 24-6 win over VMI last weekend, the ETSU football team hits the road for the final two games of the season, beginning Saturday afternoon when the Buccaneers face No. 14 Samford. Kickoff is set for 3 p.m. EST at Seibert Stadium.

In the first Senior Day home finale for William B. Greene, Jr. Stadium, the ETSU football team used a suffocating defensive effort and a 14-point scoring surge in the second half to race past Southern Conference foe VMI, 24-6… Playing in front of a crowd of 7,327 fans, the Buccaneers improved to 4-5 overall and 2-4 in SoCon play, while capping off the home season with a 4-2 mark … The Bucs held VMI to 179 yards of total offense, while collecting 259 yards in total offense, led by senior tailback Falon Lee, who rushed for a career high 93 yards rushing and scored his first touchdown since a score back on Oct. 20, 2016 against West Virginia Wesleyan … 27 players competed in their final home game last Saturday, a group that included many who were part of the first recruiting class for the Bucs back in 2014. Some of those original Bucs included major contributors such as wide receiver Drake Powell and tailback Jajuan Stinson as well as linebackers River Boruff and Trey Quillin… After going back-to-back games without creating a turnover, the Bucs intercepted the Keydets twice in this game. The first was Nasir Player’s first quarter pick for a touchdown, while junior linebacker Austin Gatewood collected an interception late in the fourth quarter … Player’s interception was the first of his collegiate career, while Gatewood recorded his second … ETSU posted its fourth 100-yard rushing game of the season as the Blue and Gold totaled 132 rushing yards … The Buccaneer defense held VMI to 57 rushing yards (1.8 per carry) … After allowing VMI to convert on five third down chances in the first half, the Buccaneer defense held the Keydets to 0-of-5 on third down in the second half … VMI manufactured the majority of its yards on the first and last drives of the game … The Keydets ran 23 plays for 120 yards in the opening and final drive of the contest, compared, to the Bucs holding VMI to 69 yards on 45 plays in its remaining 11 series.

ETSU is nearing top-10 marks in season highs … The Bucs – who have made 13 field goals this year – need three to break the all-time record of 15 set in 1984 … ETSU needs 50 more pass attempts to tie for 10th-most of 310, set in 1989, and 25 completions to move into 10th … The Bucs are 261 passing yards away of moving into 10th, while their completion percentage of 60.0 currently ranks fourth-best in single-season history.

Junior kicker JJ Jerman is also kicking his way up the ETSU record book … Jerman ranks third all-time in extra-points with 60, fourth in field goals (33) and fifth in scoring (159) … The Seymour, Tenn. Native needs three field goals to move into a tied for second with Mike Shoun, while Jerman is 13 PATs away from passing Shoun for second … Jerman is 16 points away from passing George Searcy for fourth all-time on ETSU’s scoring chart.

ETSU wrapped up its inaugural season inside William B. Greene, Jr. Stadium with a 24-6 win over VMI last Saturday … In total, over 48,000 fans walked through the gates this season to see the Blue and Gold play at home (8,008 average) … The Bucs recorded three sellouts – 9,530 vs. Limestone, 8,540 vs. Robert Morris and 8,022 vs. Mercer … ETSU ranks 21 among FCS in total attendance, which is second among SoCon teams (Mercer).

In their four wins this season, the Buccaneers are outscoring the opposition, 97-42 … ETSU’s defense is holding the opposition to 10.5 points and 254.5 yards (147.8 passing/106.8 rushing) in those contents … The defense is also limiting the opponents to a 20 percent on third down (11/55) opportunities.

Saturday marks just the fifth all-time meeting between the two programs with Samford winning three of the previous four games; however, the Blue and Gold won the last meeting a year ago as ETSU defeated the 18th-ranked Bulldogs, 15-14, to end the 2016 season … This marks just the second trip to Birmingham as Samford handed ETSU a 38-23 setback back on Nov. 18, 1989 … Prior to last year’s game in Johnson City, the last time the two programs met was on Sept. 14, 1991 when the Bulldogs defeated ETSU, 31-6, inside Memorial Center … Samford also picked up a 17-13 win in 1990 (in Johnson City).

Last year, JJ Jerman made a 28-yard field goal as time expired to lift the Bucs past Samford, marking ETSU’s first win over a ranked opponent since dropping No. 1 Georgia Southern 19-16 back on Oct. 27, 2001 … Despite falling behind 14-3 in the third quarter, ETSU fought back by rattling off 12 unanswered points to secure the win … Austin Herink ignited the comeback when he orchestrated a 12-play, 56-yard drive and capped it off with a 24-yard touchdown pass to Dalton Ponchillia on 3rd-and-19 to end the third quarter … On that drive, the Bucs converted on 3rd-and-3 from the Samford 49, a 4th-and-16 from the Samford 32 and the third down play to record the touchdown … After failing on the two-point conversion, the Bucs trailed by five (14-9), but after holding Samford to a three-and-out on the ensuing possession, ETSU went 36 yards on 13 plays in just under eight minutes to pull within two, 14-12, when JJ Jerman connected on a 39-yard field goal with 5:34 remaining … From there, the Buccaneer defense got another stop and with 3:36 remaining, ETSU started the game-winning drive from its own 23-yard line … Kobe Kelley had two clutch receptions for 11 and 19 yards, respectively, while Drake Powell’s 27-yard reception moved the Bucs into Samford territory … From there, ETSU chewed up the clock and Jerman won it with a 28-yard field goal … ETSU out-gained Samford, 329 to 265, as the Bucs threw for 238 yards and ran for 91 … The 265 total offensive yards by the Bulldogs marked their second-lowest output of the season (257 at Central Arkansas), while it was the lowest total yards allowed by the Buccaneer defense all season … The Bucs ran 21 more plays than the Bulldogs, 70-49, while ETSU set a single-game program record in time of possession by holding the ball for 43:47 … The Buccaneer defense limited Samford to 2-of-10 on third down chances, while ETSU was 6-of-15 on third down (3-of-5 in the fourth quarter … Devlin Hodges entered the game averaging 359.4 passing yards, 32.8 completions, and over three touchdown passes per game on the season ... Hodges was limited to 14-of-22 passing for 122 yards and zero touchdowns ... Hodges was held to a season-low in completions and passing yards, while it marked the first time in 2016 where he did not record a passing touchdown.

Saturday’s game will be streamed live on ESPN3 via the WatchESPN app … Curt Bloom will handle the play-by-play duties, while Chad Pilcher will be the color analyst and Hattie Breece will handle sideline reporting.

ETSU wraps up its 2017 season next Saturday when the Bucs take on in-state rival Chattanooga … Kickoff is set for 2 p.m. at Finley Stadium.