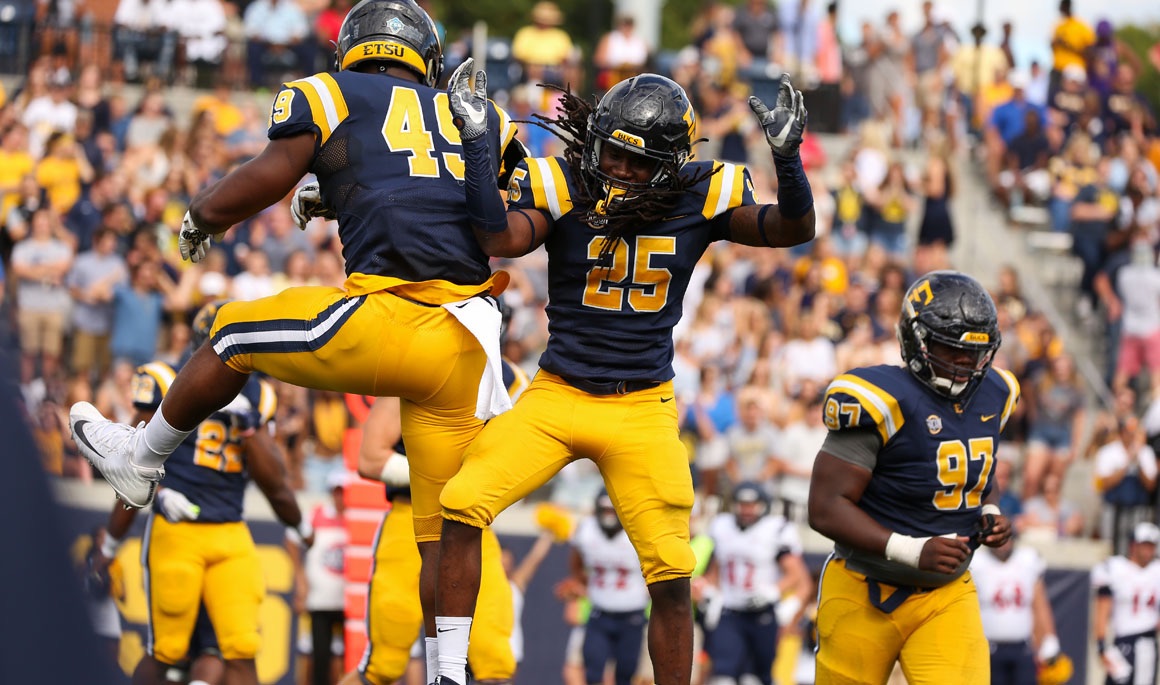 CHATTANOOGA, Tenn. (Nov. 17, 2017) -- The ETSU football team wraps up its 2017 season this Saturday when the Buccaneers face in-state conference rival Chattanooga. Kickoff is set for 2 p.m. at Finley Stadium.

The Bucs are coming off a 42-7 setback to No. 14 Samford last weekend in Birmingham … After forcing Samford to punt on its first possession, the Bulldogs strung together five consecutive touchdown drives to end the half with a 35-7 lead … Following the punt, Samford totaled 23 plays for 227 yards to go ahead 28-7 before a 28-yard interception return made it 35-7 … The Buccaneer defense held Samford to five straight three-and-outs to start the second half, while limiting them to seven points in the final 30 minutes … ETSU held Samford to negative-7 yards (12 plays) in the third quarter … Nasir Player recorded his sixth sack of the season, which is tied for the fifth-most in single-season ETSU history … With his completion to Anthony Spagnoletti in the third quarter, Austin Herink became the sixth quarterback in program history to throw for over 5,000 yards in a career … ETSU held Samford below its season average of 417 yards per game on offense as the Bulldogs totaled 349 yards (261 passing/88 rushing) … Drake Powell finished with five catches for 72 yards … Domenique Williams had three kickoff returns for 80 yards, including a long of 31 yards … Jeremy Lewis finished with four tackles and a career high three pass break ups … Out of the 349 yards allowed by the Buccaneer defense, 160 came on four plays – 75 yard touchdown pass, 34-yard reception, 23-yard reception and 28-yard run … Overall, 190 yards were allowed in the second quarter where Samford out-gained the Bucs, 190 to 36 and outscored the Bucs, 21-7 … ETSU allowed 35 first-half points – the most since giving up 37 against St. Francis in 2015 … Austin Herink turned the ball over four times (two interceptions/two fumbles), which led to 14 points.

ETSU is nearing top-10 marks in season highs … The Bucs – who have made 13 field goals this season – need three to break the all-time record of 15 set in 1984 … ETSU needs 24 more pass attempts to tie for 10th-most of 310, set in 1989, and 11 completions to move into 10th … The Bucs are 122 passing yards away of moving into 10th, while their completion percentage of 59.4 currently ranks fifth-best in single-season history.

Red-shirt junior wide receiver Drake Powell moved past 1,000 career receiving yards following his five receptions for 72 yards last Saturday at Samford … For his career, Powell – who is playing in his final collegiate game on Saturday – has totaled 84 receptions for 1,011 yards in 29 games.

Red-shirt sophomore defensive end Nasir Player is having a standout year for the Blue and Gold … Through 10 games, Player has registered 62 tackles, 12.5 tackles for loss and six sacks … The six sacks are tied for fifth in single-season history by a Buccaneer.

ETSU’s 11 opponents this year currently have a win percentage of .542 (45-38) … Prior to the VMI game on Nov. 4, ETSU had played the eighth toughest FCS schedule, while the Bucs have played the 18th toughest schedule to date ... Of their six setbacks, all of the opponents are either ranked or were ranked in the top-25 this season - James Madison is ranked No. 1, The Citadel was 13th, Furman is currently ranked 20th, Western Carolina was ranked 21st, Wofford was ranked No. 8 and Samford was ranked No. 14.

Despite only playing its third year of FCS football, four Buccaneers carry start streaks into the 2017 season … Austin Herink (QB), Matt Pyke (C), Chris Bouyer (DL), and Dylan Weigel (LB) have started all 32 games for the Bucs since the program was restarted in 2015.

Austin Herink did a tremendous job sharing the wealth with his Buccaneer receivers in the season opener against Limestone … Herink – who threw for 239 yards in the 31-10 win over Limestone – completed passes to eight different wide receivers … Senior Vincent Lowe led the group as he tied a career high with five receptions … Redshirt junior Drake Powell finished with three receptions, while Quan Harrison and Braxton Richburg both hauled in two catches in their first ever collegiate game … Herink also completed passes to eight different receivers the next week at James Madison … Overall, 17 different players have caught at least one pass this season … Of the 17 players, nine are wide receivers, three tight ends, three running backs, one full back, and Austin Herink caught a tipped pass for negative-2 yards against The Citadel.

Chattanooga leads the all-time series, 21-18-1 … Saturday marks the 22nd game played in Chattanooga with the Mocs holding a slight 13-8 advantage in the previous 21 meetings … The Mocs defeated ETSU, 37-7, last year in Johnson City, while the Bucs’ last win over Chattanooga was a 68-7 victory back on Nov. 15, 2003 inside Memorial Center … ETSU’s longest win streak in the series is five straight wins from 1992-96, while Chattanooga’s longest run is a four-game stretch from 1980-83 … The Bucs’ largest win all-time against Chattanooga was the 68-7 victory back in 2003, while the Blue and Gold have won seven of the last 11 in the series.

MORE ON THE CHATTANOOGA SERIES

ETSU’s 68 points scored in the 2003 meeting against Chattanooga marked the most points put up by a Buccaneer team in program history … In that game, Allen Davis returned an interception 90 yards for a touchdown, which is the third longest interception return in school history … Donnie Abraham had a 73-yard interception return for a touchdown in the 38-9 win over the Mocs in 1995 … In 1980, Ronnie Horton returned a kickoff 99 yards in the 26-14 setback at Chattanooga, which marks the second-longest kickoff return in program history … Chris Beatty’s 79-yard touchdown pass to David Rockhold helped propel the Bucs to a 27-24 win over the Mocs in 1992 – that pass is tied for the fifth longest scoring pass play in school history … Mark Williams threw for 336 yards against the Mocs in 1991, while Alan Chadwick threw for 308 yards and five touchdowns in the 35-0 win in 1972 … Chadwick’s five touchdown passes are tied for the single-game Buccaneer record, while his 308 passing yards rank 10th … The Bucs also blanked Chattanooga, 35-0, in 1979 as Mark Hutsell threw four touchdowns in that shutout win … Wide receiver Cecil Moore recorded 12 receptions (tied for third in single-game history) in ETSU’s 24-22 win over the Mocs in 2000, while Brandon Walker (1999, W, 28-14) and George Searcy (1989, W, 24-23) rushed for three touchdowns in wins over Chattanooga … The three rushing touchdowns are tied for second-most in program history … Last year, defensive back Daren Ardis tied the ETSU single-game record with an 87-yard fumble return.

BUCS AND MOCS IN SEASON FINALES

Saturday’s game will be streamed live on ESPN3 via the WatchESPN app … Chris Goforth will handle the play-by-play duties, while B.J. Coleman will be the color analyst.

In addition to following the Bucs on your mobile device and/or tablet with live audio and video, fans can get up-to-the-minute stats by following the action via Sidearm Sports. Fans can access live stats on their computers or mobile devices via ETSUBucs.com.