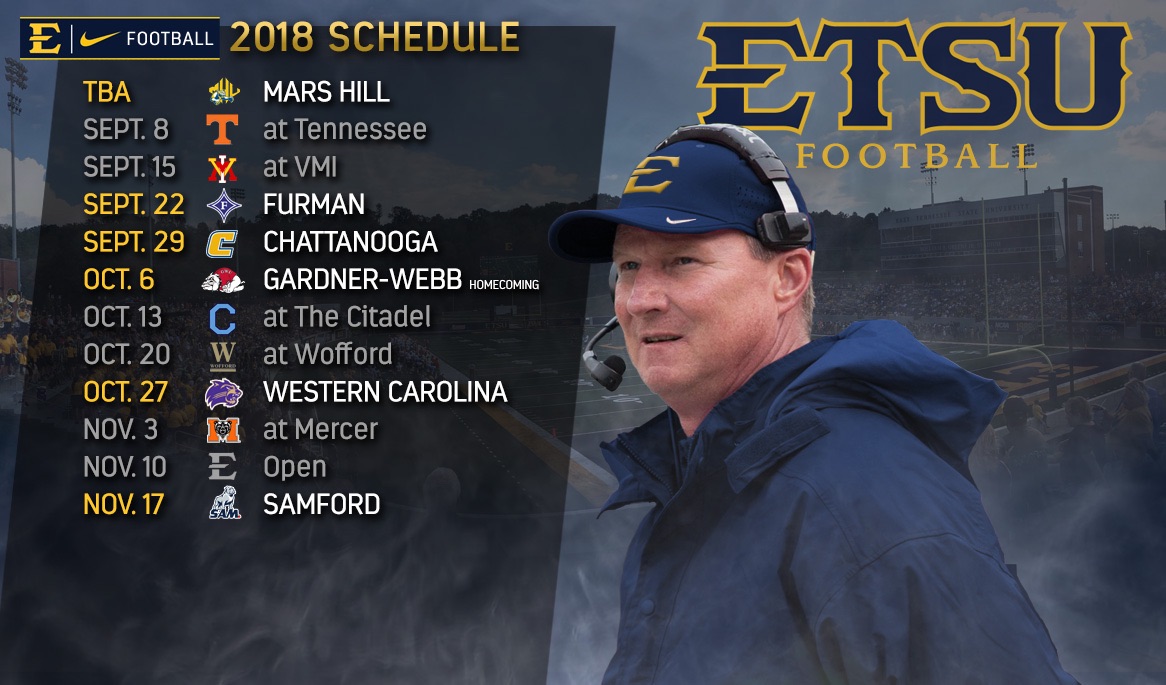 “This is a tough schedule that will challenge us week in and week out,” said Sanders. “We are excited to play in front of our home crowd six times, including being at home for the season opener. Taking our team to Knoxville for the first ever game at Tennessee will create a lot of interest around our program and in the community. We play in one of the best conferences in the FCS, so we need to come ready to play each week.”

For the second straight season, ETSU will open at home as the Bucs host Mars Hill at William B. Greene, Jr. Stadium. The date for the 2018 opener has yet to be determined.

ETSU has won its last two season openers, which includes a 20-17 double-overtime win at Kennesaw State in 2016, and last season’s 31-10 victory over Limestone in front a stadium-record 9,530 fans at William B. Greene, Jr. Stadium.

BUCS, VOLS TO MEET IN KNOXVILLE

ETSU and Tennessee will make history on Saturday, Sept. 8, when the two programs meet on the gridiron for the first time ever. The Buccaneers will earn a game guarantee of $500,000 for playing the Volunteers at Neyland Stadium. This marks the first of four FBS opponents the Bucs will play, as ETSU also faces Vanderbilt and Appalachian State in 2019, while taking on reigning SEC champion Georgia in 2020. The Blue and Gold again play at Vanderbilt in 2021 and at Appalachian State in 2024.

After opening the Southern Conference schedule with a pair of home games the last two seasons, ETSU will begin conference play on the road in 2018 as the Bucs face VMI on Sept. 15 in Lexington, Va. The Blue and Gold defeated the Keydets, 24-6, last season, and ETSU leads the all-time series, 14-9.

THREE STRAIGHT AT HOME FOR THE BLUE AND GOLD

Following back-to-back road games at Tennessee and VMI, ETSU returns home for three straight games from Sept. 22-Oct. 6. During this homestand, the Bucs take on Furman (Sept. 22), Chattanooga (Sept. 29) and Gardner-Webb (Oct. 6). Furman made a trip to the playoffs a year ago and finished the season ranked No. 20 in the coaches’ poll.

The Bucs’ remaining home games feature conference-rival Western Carolina on Oct. 27, while ETSU wraps up regular season play with Samford on Nov. 17. Samford was one of three SoCon teams to earn a bid to the 2017 playoffs and finished the season ranked No. 17. This marks the second time in the last three seasons the Bucs and Bulldogs will meet in the regular season finale, as the Bucs defeated then-No. 18 Samford to end the 2016 campaign.

Along with its trip to VMI, ETSU faces a pair of option teams in consecutive weekends, as the Bucs play at The Citadel on Oct. 13 and at Wofford on Oct. 20, along with wrapping up its road schedule at Mercer on Nov. 3. Wofford – the reigning conference champion – finished the season ranked No. 7, while The Citadel has made trips to the playoffs in two of the last three seasons. ETSU and Mercer have met the last three seasons, with the teams splitting its first two meetings as conference foes.

ETSU’s open date comes in week 11 (Nov. 10), which is sandwiched between the road game at Mercer and its regular season finale versus Samford.

For ticket information regarding the upcoming 2018 season, please visit ETSUBucs.com or call (423) 439-3878. Click here for additional information on season tickets.