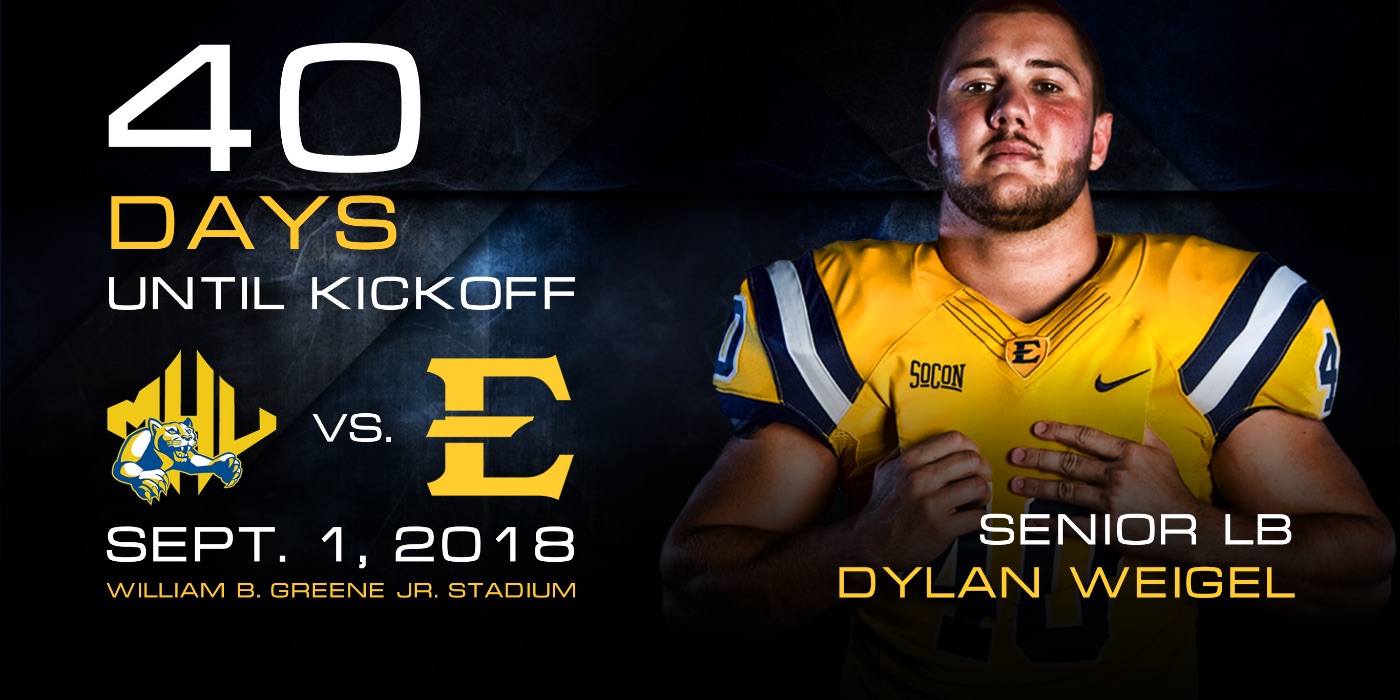 JOHNSON CITY, Tenn. (July 23, 2018) – As ETSU football approaches kickoff for the 2018 campaign, ETSUBucs.com will count down the days by featuring the program’s 21 seniors on the site and via social media throughout the summer months.

Today marks 40 days until the Buccaneers open the season against Mars Hill on Saturday, Sept. 1 at William B. Greene, Jr. Stadium. Senior linebacker and No. 40 Dylan Weigel (Pickerington, Ohio) is the 14th player to be featured in this special segment.

Weigel, a member of the Bucs’ original signing class in 2014, has started all 33 games for the Blue and Gold since the program restarted in 2015. For his career, the Buccaneer linebacker has totaled 325 tackles, 18.5 tackles for loss, three sacks, four forced fumbles and six fumble recoveries. The Pickerington, Ohio native led the FCS in solo tackles as a freshman in 2015 with 79, which led to him being named a Finalist for the STATS FCS Freshman of the Year award. The all-SoCon selection has totaled 21 double-digit tackle games and is tied for seventh all-time in program history in career tackles. Weigel posted a career-high 20 tackles against Emory & Henry in 2015, marking the most by a freshman FCS player that season, while ranking second all-time in ETSU single-game history. The SoCon Honor Roll member led the Bucs with 92 tackles last season, which included a season-high 18 against The Citadel that led to him being named SoCon Defensive Player of the Week. Overall, Weigel ranked eighth in the SoCon in tackles per game (8.4) in 2017.

ETSU fans are reminded that they can order season tickets now for the 2018 season by clicking here or by calling the ETSU ticket office at (423) 439-3878. Along with a six-game home schedule that features matchups with Mars Hill (Sept. 1), Furman (Sept. 22), Chattanooga (Sept. 29), Gardener-Webb (Oct. 6), Western Carolina (Oct. 27) and Samford (Nov. 17), the Bucs will also hit the road for the program’s first-ever trip to Neyland Stadium to take on Tennessee on Sept. 8.