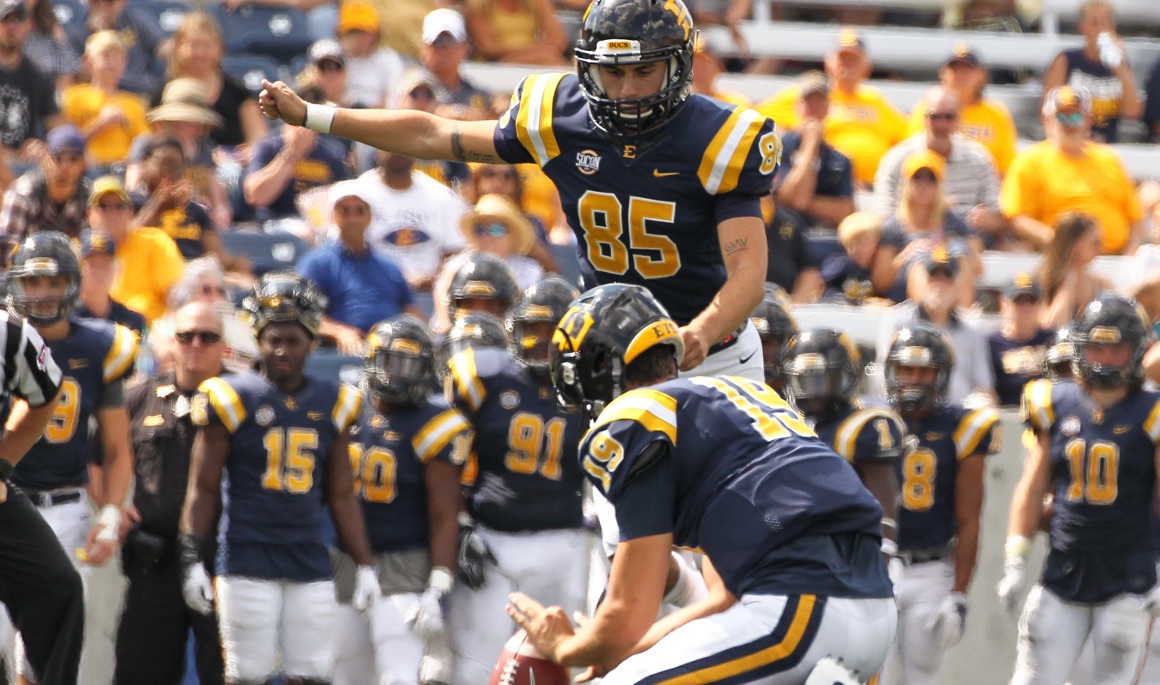 As JJ Jerman enters his final season in the Blue and Gold, the Buccaneer kicker has been honored to be a part of the journey in helping build the ETSU football program.

However, what many may not realize, Jerman’s journey almost took him 250 miles southeast of Johnson City to Campbell University.

With some help from a former high school and ETSU teammate, Jerman was able to get on the Bucs’ radar. After a zip-lining trip with his friends, Jerman got a phone call from that former teammate, and he was ready to come visit ETSU’s campus.

“I remember I was zip-lining one day with friends and had no reception on my cell phone, but as soon as we got back to the car, I had a text message from Nick Sexton (former Seymour and ETSU teammate). He told me to call Coach Carl Torbush. Once I talked to Coach, I ended up coming on a visit. I really liked the campus and the idea of playing for a new program. Following my visit, I talked everything over with my family and decided to decommit from Campbell and come to ETSU.”

The decision to stay closer to home has worked out for both Jerman and the Bucs.

Jerman – who made a pair of game-winning field goals at Kennesaw State and versus No. 18 Samford in 2016 – enters his final season as one of the top kickers in program history and among current FCS players. Jerman is 34-for-47 (72%) in field goals, 61-of-62 in extra-points and has totaled 163 points in his first three seasons at ETSU. The 2017 all-Southern Conference selection ranks third all-time in program history in extra-points, fourth in field goals and fifth in scoring.

Along with the two game-winning field goals, Jerman also added a pair of 51-yard field goals a year ago – a goal the Buccaneer kicker had set out to do during his career.

“Every kicker dreams of making a game-winning field goal,” said Jerman, whose 51-yard field goals (vs. Wofford and Chattanooga) are tied for the second longest mark in program history. “I had an average freshman season, and going into my sophomore season, it was a new year and  I really didn’t know what to expect. To start the season with the game-winning kick at Kennesaw State was really exciting and gave me a lot of confidence. It was awesome to be part of a big win like that.

“With those 51-yarders, I had always wanted to hit one above 50 (yards). I think I could hit one farther if I am ever needed to. The Wofford game was fun. It was a rainy day and I didn’t think I would get an opportunity from that distance because of the conditions. But when Coach called my name, I was ready, and when I hit it, it was a sigh of relief to break that 50-mark in game. Now, I want to shoot for longer if it comes down to it. It’s really fun to think back to how exciting those moments are.”

With all of the buildup and excitement that comes with those kicks, Jerman said he has to continue telling himself to remain relaxed and focus on doing his job.

“I am pretty calm in games and I am a calm person in general,” said Jerman. “It’s weird because I never think about how far the field goal is until after I kick it. The only thing I think about is the distance of the ball and where the ball is going to be snapped, so I go out there, kick it and do my job. It has all come with maturity. When I was younger I would be very nervous and I still get nervous when the game starts, but once I get the first kick, I get locked in and feel confident.”

As for doing his job, he never lets the moment get too big because he wants to contribute to the team’s success.

“Everyone else does their part to put us in position to win, and if I don’t make field goals, I am not contributing to the team,” said Jerman, as he reflected back on the two walk-off kicks. “Making that final kick to win the game is something a kicker always looks forward to. But at the end of the day, in those two wins against Kennesaw and Samford, if I don’t make that kick, we don’t win the game. It comes down to me doing my job as I am supposed to.”

Kicking was not the only part of Jerman’s game in the past, as he also spent time playing wide receiver and safety at Seymour High School. However, as time went on, his coach saw the value in Jerman’s leg and did not want to risk injury.

“During my freshman and sophomore seasons, I played some wide receiver and safety, but each year it got less and less. By my junior year I primarily focused on kicking… That was to keep me safe,” said Jerman, who started playing football in eighth grade after being noticed on the soccer pitch. “I started kicking on varsity during my freshman year. By my junior year, that is when I began to realize I could possibly kick in college. I stopped playing soccer after my freshman season because of too many injuries and got burned out by it. Football was something new to me, and I really enjoyed it. I had a new passion for the sport, and it helped me get to college.”

That new passion is something the Buccaneer faithful are glad Jerman took a liking to, as he will go down as one of the top kickers in program history when his career is all said and done. With the start of his final season less than a month away, Jerman has more goals to accomplish – another book to finish reading.

“I like to read a lot,” said Jerman, which should not be surprising since he is an English major. “I read a book before each season that can inspire me and keep me focused.”

As far as his goals go, Jerman wants to continue striving to be the best kicker possible, and hopefully, that can result in receiving a professional contract.

“My first goal is to always do what I am supposed to do to help the team – be as close to perfect as possible,” Jerman said. “I would love to help this team win a ring and go to the FCS Playoffs.

“I would love to play professionally if given the chance. Obviously, the NFL is the first option, but I started watching the Canadian League recently to learn those rules. Then there’s also the Arena League and XFL, so I will keep up with all of those dates. Of course, all of that is in the future and I need to focus on the season ahead of me, but playing professionally is something that interests me.

As Jerman looks back on his career, he is honored to have been given the opportunity to help the team and be part of this journey.

“This has been a great journey. We have come from nothing. We didn’t have a lot of things. We didn’t have a locker room, weight room or a stadium. Each year, we have been adding new things to the program, and now this is our third year in the SoCon. We have high expectations as we enter the season, and the same goes for our fans and community. This has been awesome to be part of something that has been brand new because a lot of people will never get the opportunity that we were given.

“It has been rough along the way. Football is hard. People don’t realize all of the stuff that takes place off the field so we can go out and compete on the field. We have had our growing pains but we have also had some memorable moments. I wouldn’t trade this journey for anything. These have been one of the greatest times of my life.”