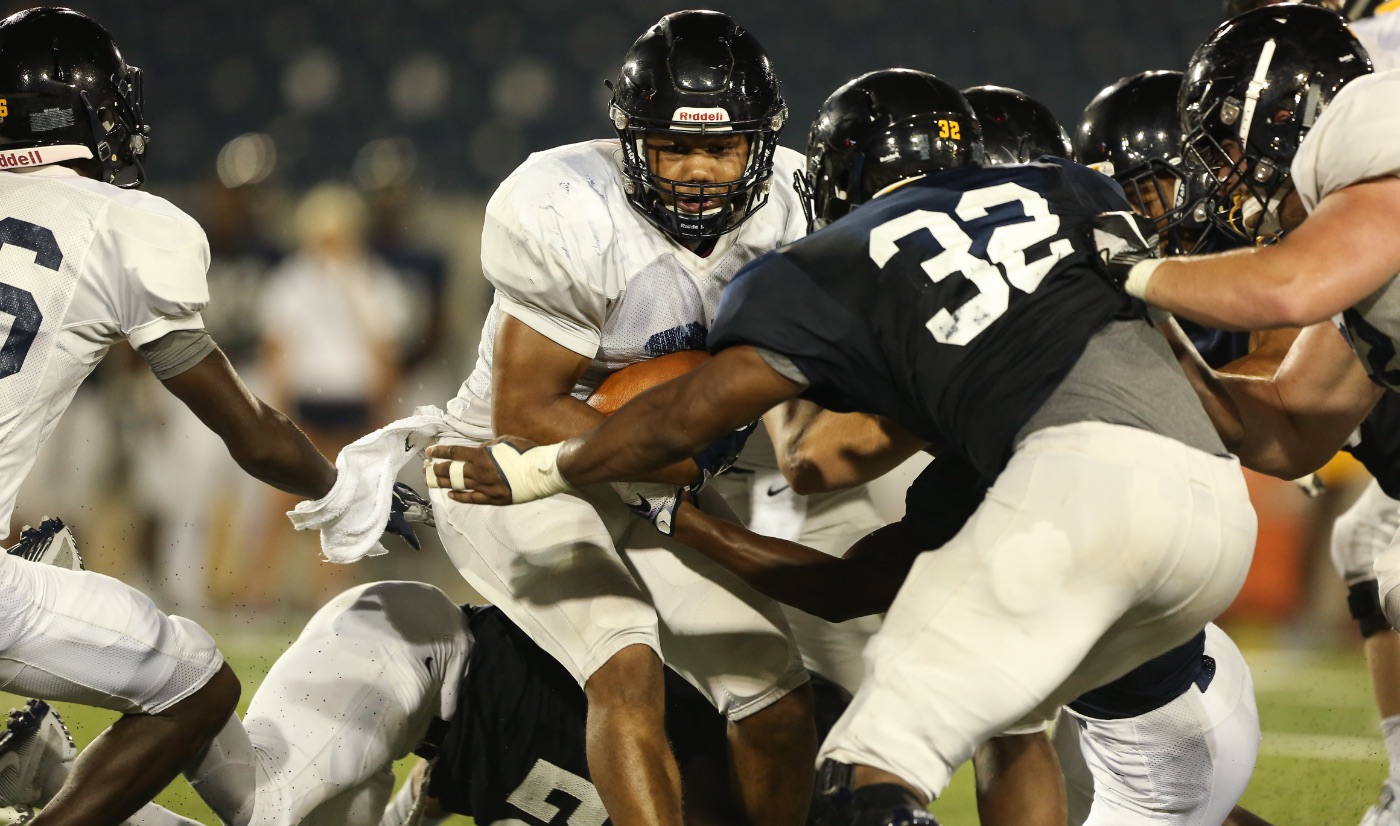 JOHNSON CITY, Tenn. (Aug. 11, 2018) – The ETSU football team went under the lights to hold its first scrimmage of 2018 fall camp on Saturday night inside William B. Greene, Jr. Stadium.

The Bucs, who are less than three weeks away from their season opener against Mars Hill on Sept. 1, got in a lot of work despite the scrimmage being halted by a 30-minute lightning delay.

Freshman defensive back Jacob Saylors (Jasper, Tenn.) forced the lone turnover as he intercepted a pass during red zone drills.

Quarterbacks Logan Marchi (Bristol, Conn.) and Austin Herink (Cleveland, Tenn.) accounted for 21 completions for 234 yards and three touchdowns (two rushing/one passing) … Herink finished with 132 passing yards and Marchi recorded 102 yards through the air … Following the lightning delay, Herink drove the Blue and Gold down field and scored on a 10-yard run, while he later found senior Kobe Kelley (Knoxville, Tenn.) for a nine-yard score during red zone drills … Marchi scored on a two-yard run to cap off his work in the red zone … Freshman Trey Mitchell (Knoxville, Tenn.) went 4-for-4 for 44 yards during his time behind center.

Redshirt senior Matt Thompson (Morristown, Tenn.) led the running backs with eight carries for 47 yards, including the longest play of the night when he broke a 30-yard run … Fellow redshirt senior Cory Colder (Ashburn, Va.) finished with 31 rushing yards and had one reception for 14 yards … Freshman Jalyn Williams (Swainsboro, Ga.)totaled 22 rushing yards and scored on a 1-yard run up the middle.

Fourteen different Bucs accounted for the 25 receptions for 278 yards, with Kelley pacing the group, registering six catches for 66 yards and the touchdown … Redshirt junior Andrew Heyward (Powder Springs, Ga.) hauled in three catches for 59 yards, which included the longest catch by a receiver as Herink found him for a 29-yard completion … Braxton Richburg (Hoschton, Ga.) and Keith Coffee (Miami, Fla.) combined for six receptions for 58 yards.

Following an off day on Sunday, the Blue and Gold return to practice on Monday morning at William B. Greene, Jr. Stadium.

For more information on Buccaneer men’s football, visit ETSUBucs.com and click on the football link.