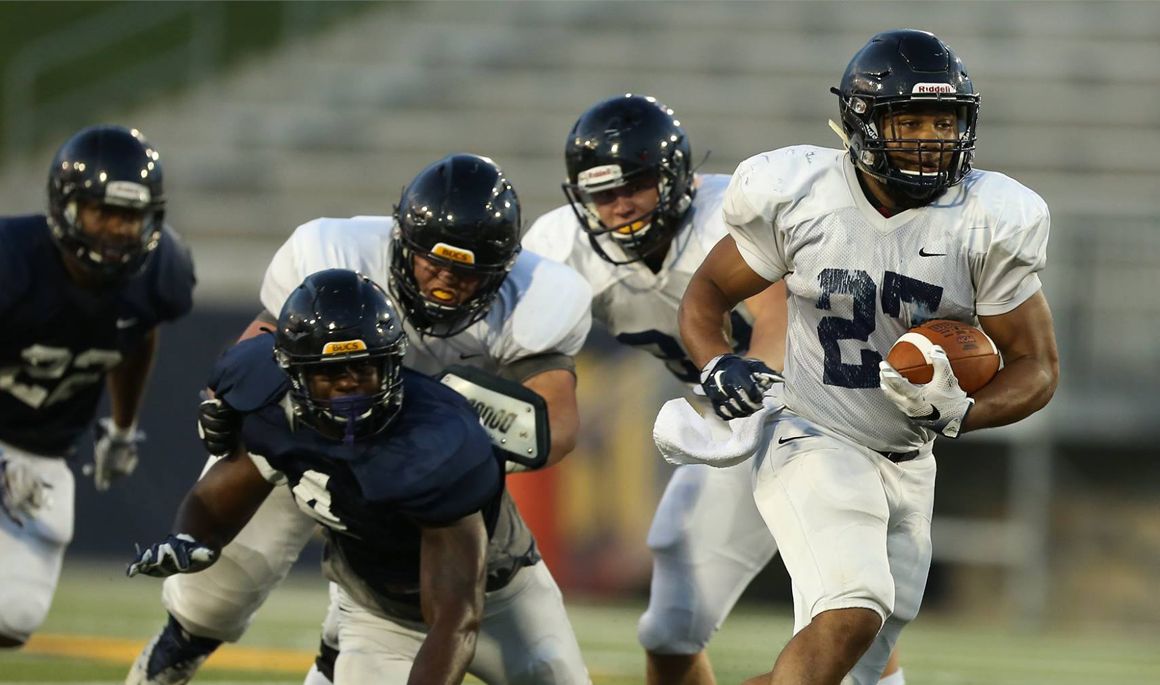 JOHNSON CITY, Tenn. (Aug. 18, 2018) – For the second week in a row, the ETSU football team held a Saturday night scrimmage under the lights inside William B. Greene, Jr. Stadium as part of its 2018 fall camp.

The Bucs are now two weeks away from their 2018 season opener against Mars Hill on Sept. 1 in Johnson City, ETSU’s first game under head coach Randy Sanders.

Below are the highlights from Saturday’s scrimmage…

The run game accounted for all three ETSU touchdowns. Freshman Jacob Saylors (Jasper, Tenn.), who recorded the lone interception as part of the defense last week, led the backfield with six carries for 118 yards and two scores as a running back, averaging 19.7 yards per carry. On back-to-back third down scenarios, Saylors broke out a couple of 55-yard touchdown runs.

Fourteen ETSU players accounted for the 19 receptions for 242 passing yards, led by redshirt junior Quan Harrison (Greeneville, Tenn.) with three receptions for 69 yards. The freshman trio of Paul Miller (Sugar Hill, Ga.), Will Huzzie (Duluth, Ga.) and tight end Nate Adkins (Knoxville, Tenn.) each reeled in two catches for double-digit yardage. Adkins brought in the longest catch of the night, putting ETSU in the red-zone with a 44-yard catch from Marchi.

The Bucs totaled 50 tackles, six of which were for loss, two sacks, four pass breakups and six quarterback hurries during the open field and third-down conversion segments of Saturday night’s scrimmage.

Senior defensive back Domenique Williams (Charlotte, N.C) led the Bucs with five tackles in scrimmage play — all of which were solo tackles.

The Bucs will now work towards its season opener at home, set for Sept. 1 against Mars Hill at 7:30 p.m. inside William B. Greene, Jr. Stadium.

For more information on Buccaneer men’s football, visit ETSUBucs.com and click on the football link.