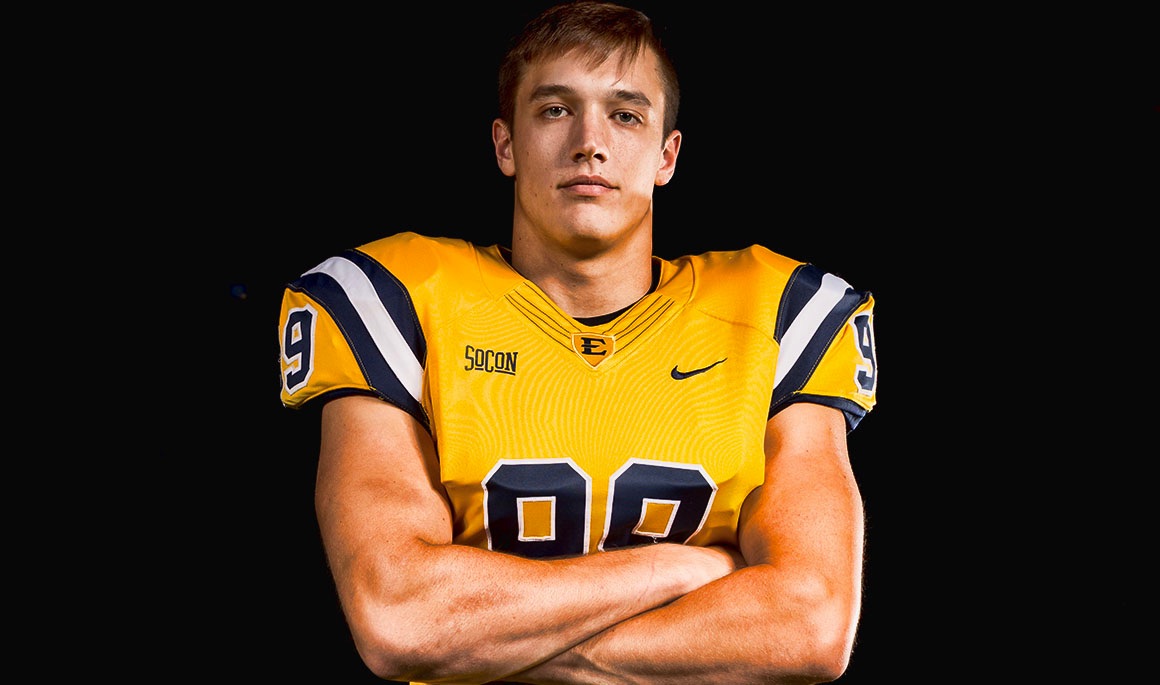 Last season, ETSU redshirt sophomore linebacker Blake Bockrath had a standout year. In 2018, he hopes to do even more for the Buccaneer defense.

“I want to continue making an impact and be more of a leader this year,” said Bockrath, who finished the 2017 season named to the SoCon All-Freshman Team and earned Freshman All-American Honorable Mention by Hero Sports. “I want to make some big plays on the field.”

As a freshman, Bockrath played in all 11 games of the 2017 season, with seven of those games being starts. He totaled a 57 tackles (34 solo), nine tackles for loss, 4.5 sacks, six quarterback pressures and a forced fumble along the way.

But Bockrath is looking for more.

In order to reach his goals for this upcoming season, the 6-foot-6, 232-pound linebacker put in some hard work this off-season.

“I’ve gained about 10-15 pounds this off-season,” Bockrath said. “I think that is really going to help me get more power on the line versus run-blocks. I’ve also worked on my hand techniques with Buccaneer defensive ends coach Collins Ukwu, which is going to help with my pass-rush as well.”

However, working hard isn’t something new for the sophomore.

In 2016, Bockrath was redshirted, which meant he would have to go an entire year without competing in any games.

“Redshirting had a huge impact on me. I didn’t really realize it until last season,” said Bockrath. “It wasn’t fun, but I was able to gain a lot of weight and learn what the defense was like. I was able to figure out how it all worked and I believe that helped me.”

ETSU defensive coordinator Billy Taylor also knew how important it was for Bockrath to redshirt that first season.

“That first year we had Blake, he was weighing about 210 pounds. We made the decision that he would be so much better off with a fifth year rather than being thrown out there and getting knocked around,” Taylor said. “That year in the weight room with Coach Al Johnson was fantastic for him. He’s one of the hardest working guys we have in the weight room. Heck, he’s built like a Greek god right now.”

Bockrath said redshirting also gave him a chance to find new inspiration for his play, which he found in a teammate.

“Even though he’s a D-tackle and he’s a little bit bigger than me, Nasir Player is who I try to base my play off,” said Bockrath. “Nasir is a tough guy, he’s go, go, go and he has a great pass rush and good power.”

When Player does something good on the field, Bockrath always wants to follow suit.

“If Nasir gets a couple of sacks, I want to get a couple sacks, too.”

It’s this type of mentality that has led to Bockrath’s excellence on the field.

“Blake is someone that is bound and determined to be great,” said Taylor. “That’s what you look for as a coach. He’s the last guy to leave the weight room each day, and he gets out early to practice for extra work... he’s everything you want in a football player.”

The field isn’t the only place Bockrath excels. In the classroom, the sophomore studies computer science and has been named to the SoCon All-Academic Team and SoCon Honor Roll.

When asked to describe himself in one word, Bockrath said, “I’m driven. I always have been. My family has always pushed me to get where I am and I’ve always had the goal to be at a Division I school. Now that I’m here, I’m driven to do better and maybe, one day, take my career to the next level.”

It’s safe to say that “lack of motivation” is something Bockrath does not suffer from. Whether it’s in the classroom or on the field, he is always driven to find success.

“I want to win every game. I think that’s the attitude of our entire team,” Bockrath said. “There might be some tough games, but we will be ready to bounce back. That’s our mindset this year, to win every game, no matter what. We are here to win a SoCon Championship, make the playoffs and win a National Championship... those are our goals.”

And with a new coaching staff at hand, the excitement to achieve those goals is higher than ever.

“With this new staff, I think there is a whole new attitude on our team,” added Bockrath. “I think Coach Randy Sandersbrings that attitude, and makes everyone want to do better and to win.”

So when the lights at William B. Greene Jr. Stadium are powered on September 1, keep an eye out for #99. He’ll be ready to keep making big plays.