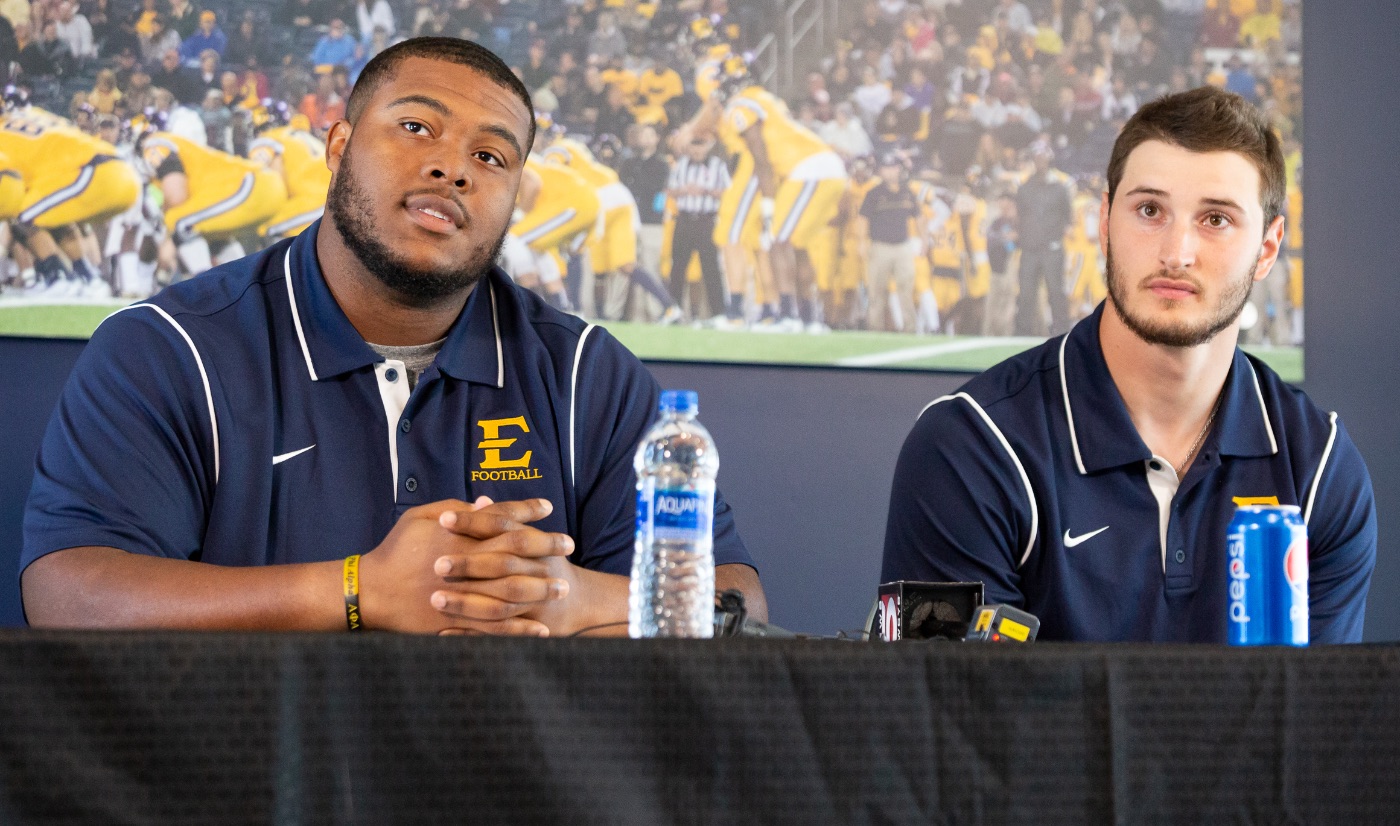 JOHNSON CITY, Tenn. (Aug. 27, 2018)– With kickoff to the 2018 season five days away, ETSU football met the media on Monday afternoon to preview the Buccaneers’ season opener against Mars Hill.

Below are comments from Coach Sanders, Marchi and Bouyer.

It definitely feels more real than it did eight or nine months ago. I'm excited to play. It's time to play. I think our guys are ready to play.

We had a good camp. Our guys worked hard. We asked a lot of them and they delivered on what we were asking. It's time to go play. It'll be fun to play a team in a different jersey and finally get a chance to measure ourselves.

ON PREPPING FOR MARS HILL

It's been fun watching someone else on tape. The good thing about our defense is we are pretty multiple, so from an offensive standpoint, they prepare you for a lot of different things. When you turn on the Mars Hill tape, defensively what they do, are things we have seen in practice from our defense.

Offensively, they're a similar style to us. I think that helps our defensive preparation. They have a couple of receivers returning that are good players. They have an offensive lineman that's a very good player. They're replacing a quarterback and some guys on defense. They had three returning starters on the defensive line and strong linebackers, so they have some experience.

It's going to be a challenge for us. I tell our team, it doesn't matter what the name on the jersey is. We have to prepare for each team the same. Hopefully, we can take a mature approach, and whether it's Mars Hill, Tennessee, VMI, Furman, or whoever is next on our schedule, we have to get ourselves prepared to play the best game we can play. As long as we do that, we'll be fine.

Mars Hill is a good football team. Their coach has around 263 times more experience than I do, because he's been there 25 years, and I'm getting ready to coach my first one. So, if it gets down to a game of head coaches experience, we're going lose that one. So, hopefully, the players will win it for us.

ON THE BIGGEST IMPROVEMENT FROM THE TEAM

It's hard for me to say what the biggest area of improvement is, because I wasn't with these guys last year. Since I arrived and got started in the spring, our guys have been learning a completely new language. It's like moving to a new country and learning that new language the first day.

Offensively, we are understanding much more about what we're trying to accomplish. How we're trying to do things, what I expect, what the staff wants, and how we want it to look.

Defensively, I think guys are playing fast. I think they're playing hard. It's difficult for me to say if they are playing faster and harder than they did last year, but I like the effort. I tell everyone to play like their hair is on fire. I want that kind of effort when they're on the field. For the most part, when you go through fall camp and look at our tape, we have guys running to the ball… that's what you want.

WHAT DO YOU HOPE TO LEARN FROM YOUR TEAM ON SATURDAY NIGHT?

One thing I've learned, a lot of times guys are one way in practice and they're a different way in games. I've had guys that were great in practice, and then once the lights came on, they went crazy. I've had some other guys that were pretty good in practice, but once you got to the game then they really got excited. Typically, guys play like they practice, but I remember Randall Cobb – when he was at Kentucky – he practiced hard and everything else, but you never really saw how good he was until he started playing live because everybody's just coming up two-hand tagging him in practice. He was just able to break tackles and make things happen, so I'm anxious to see exactly how our guys react when the lights come on.

THE REACTION ON BEING NAMED THE STARTING QUARTERBACK

Naturally, you're excited, because you get a chance to go out, compete and play. It’s also a relief because I can put that behind me and look forward to Mars Hill. I look forward to executing the game plan, working with the guys on offense, and going out there and competing.

ON THE EMOTIONS ENTERING SATURDAY’S GAME

To this day, I still get butterflies when getting ready to go out and play. Anytime you get to suit up and go play, is exciting. I anticipate us playing a good game. We’re going to go out and compete. I'm excited to see how this team goes out and plays.

WHAT CAN FANS EXPECT TO SEE FROM YOU

I love the game and get fired up. When I'm out there, I'm like a little kid. I like bringing energy to the field. I'm very passionate each and every play, every down. I idolize Brett Favre. He’s my favorite quarterback, so playing style-wise, probably not the best to idolize, but his love for the game, is definitely something that is my favorite.

ON THE OPENING OF THE NEW LOCKER ROOM

LAST YEAR THE DEFENSE FINISHED THIRD IN THE SOCON; ARE YOU GUYS TRYING TO IMPROVE ON THAT THIS YEAR?

Our first year in the SoCon we ranked fifth in total defense and last year we were third, so our expectation is to be number one this season. At practice, we emphasize that during our drills. We have turnover drills and we really emphasize getting to the football. We are just trying to do what Coach Sanders said, ‘play like our hair is on fire.’

ON THE OVERALL DEFENSE

Despite graduating a couple of seniors, we have a lot of experience returning. We also have a lot of newcomers coming in and stepping up to the challenge. Our communication is really good as far as our entire unit. Everybody is congratulating each other and everybody trusts each other. We really trust the people behind us, and they trust what is in front of them.