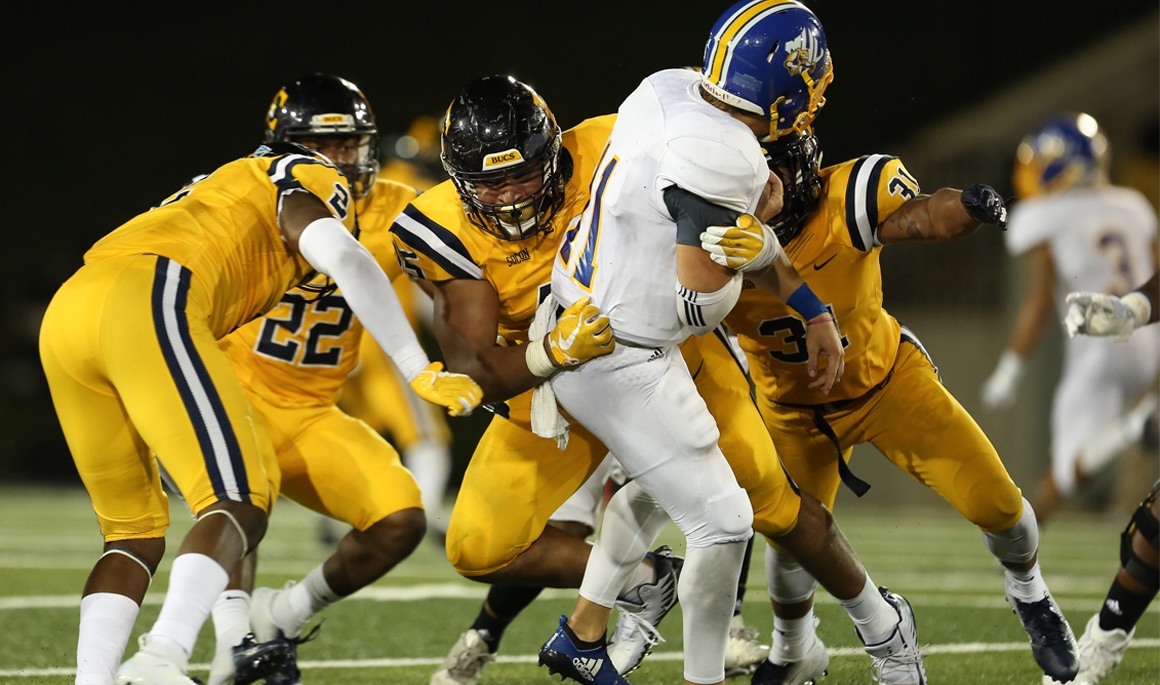 ETSU-Tennessee to kickoff Saturday at 4:01 p.m. on SEC Network

KNOXVILLE, Tenn. (Sept. 7, 2018) -- For the first time in program history, the ETSU football team will take on Tennessee as the two in-state foes are set to meet on the gridiron Saturday afternoon inside Neyland Stadium. Kickoff is set for 4:01 p.m. and will be televised on SEC Network.

At halftime, the crew will have the Zaxby’s Halftime Show, while fans can tune into the General Shale Post Game Show for a full wrap up, with game statistics, players and coach interviews and other post-game information.

Saturday’s game will also be broadcast on SEC Network with the team of Taylor Zarzour (play-by-play), Matt Stinchcomb (color) and Kris Budden (sideline reporter) providing the call. Click here to access the SEC Network channel from your cable provider.

No. 3 – Pregame Tailgate: A pregame tailgate will be hosted by the ETSU National Alumni Association, ETSU Foundation President's Circle, and the ETSU Knoxville Alumni Club, beginning at 1 p.m. on Saturday at McClung Tower near Neyland Stadium. This event will be a One Stop Tailgate with a catered pregame meal by Calhoun's. Cost for the meal is $30 for adults and $10 children 10 years and younger. Click herefor more information.

No. 5 – Watch Party: Fans from the Tri-Cities area that are unable to make the trip to Knoxville can still watch the game with their group of Buccaneer fans, as Wild Wing Café in downtown Johnson City will be holding an official watch party on Saturday afternoon.

ETSU opened the 2018 season with a 28-7 win over Mars Hill in front of a sellout crowd (8,518) last Saturday at Greene Stadium … ETSU out-gained Mars Hill 511 to 263, while holding the Lions to 4-of-14 on third down and 0-of-3 on fourth down … The Bucs threw for 273 yards and rushed for 238, resulting in eight yards per play … The Bucs’ 511 yards of total offense was the most since posting 574 in the win over Kentucky Wesleyan back on Nov. 21, 2015 … The 238 rushing yards were the most by a Buccaneer team since totaling 323 in a win over West Virginia Wesleyan back on Oct. 20, 2016 … After allowing Mars Hill to go 11 plays for 73 yards and a touchdown on its first possession, the Buccaneer defense held the Lions to 43 yards on 25 plays for the remainder of the first half … ETSU’s defense held Mars Hill to 51 yards on 21 plays in the second quarter, despite the Lions holding the ball for 10:43 of the quarter … In the third quarter, ETSU out-gained Mars Hill 165 to 30 … The Bucs rushed for 73 yard and passed for 92, while holding the Lions to negative-6 yards rushing on six attempts and limiting Mars Hill to 0-of-3 on third down … The Bucs scored 28 unanswered points, including registering scores on their final three possessions, which included a 12-play, 83-yard scoring drive that took nearly seven minutes off the clock on ETSU’s final scoring drive … After going 2-of-6 on third down in the first half, ETSU converted on three of its four chances in the second half, while holding Mars Hill to 1-of-7 on third down and 0-of-3 on fourth down in the second half.

A GAME OF FIRSTS

Last Saturday marked a game of firsts for a handful of Buccaneers … The first half scoring pass between Logan Marchi (Winsted, Conn.) and Kobe Kelley (Knoxville, Tenn.) marked firsts for both players … It was Marchi’s first touchdown pass in a Buccaneer uniform and the first touchdown catch in Kelley’s career at ETSU … Other firsts on the night included Quay Holmes’ (Powder Springs, Ga.) first scoring run, while Quan Harrison (Greeneville, Tenn.) and Evan Wick (Hallettsville, Texas) collected their first ever scoring receptions.

HOLMES HAS GAME TO REMEMBER IN COLLEGIATE DEBUT

Redshirt freshman running back Quay Holmes had a game to remember in his collegiate debut last Saturday against Mars Hill … Holmes, who redshirted the 2017 season, rushed for 118 yards on 17 carries with one touchdown in last weekend’s 28-7 victory … Holmes became the first ETSU running back to rush for over 100 yards since Jajuan Stinson totaled 114 yards in a win over Cumberland on Nov. 12, 2016 … Holmes’ 118 rushing yards were the second-most by a SoCon player in the opening weekend.

Redshirt junior wide receiver Quan Harrison posted his first 100-yard receiving game in Saturday’s 28-7 win over Mars Hill … Harrison finished with five receptions for 112 yards and one touchdown, becoming the third player to finish with over 100 receiving yards since the program restarted in 2015.

Following a career-high 10-tackle performance in last weekend’s win over Mars Hill, ETSU junior defensive back Jeremy Lewis (Lawrenceville, Ga.) was named Southern Conference Defensive Player of the Week by College Sports Madness ... Lewis, who totaled five solo tackles on the night, also assisted on a tackle for loss in the fourth quarter ... The 10-tackle effort bested his previous career high by one, which was set against Furman in 2016 ... The 10 tackles were tied for the third-highest total by a SoCon player last weekend as Lewis was joined by teammate Dylan Weigel (Pickerington, Ohio) with 10 tackles.

WEIGEL MOVING UP THE RECORD BOOK

Following his team-leading 92 tackles in 2017, redshirt senior linebacker Dylan Weigel (Pickerington, Ohio) has moved into the top-10 of the Buccaneer all-time tackle leaders … Following his 10-tackle performance in the opener vs. Mars Hill, Weigel moved his career total to 335 tackles, which leads all active FCS players … Weigel ranks seventh all-time in program history in total tackles and needs 118 total tackles to beak Mario Hankerson record of 452, which was set from 1994-97.

ETSU head coach Randy Sanders, who was named the 18th head coach in program history back in December, joined an elite group of coaches to win his Buccaneer debut following the Bucs’ 28-7 win over Mars Hill on Sept. 1 … Sanders became the 10th ETSU to win his coaching debut … He joined the ranks of Paul Hamilton, Mike Cavan, John Robert Bell, Star Wood, Hal Littleford, L.T. Roberts, Gene McMurray and J.K. Luck to win their first game in their ETSU debut.

MORE FUTURE OPPONENTS FOR THE BUCS

In addition to playing Tennessee in 2018, the ETSU Department of Intercollegiate Athletics announced on April 8, 2016, that the Buccaneers will be playing both Vanderbilt and Appalachian State starting in 2019 ... The Bucs will also play at Vanderbilt in 2021 and at Appalachian State in 2024 ... ETSU also announced in June of 2016 that the Blue and Gold will travel to Athens in 2020 to take on Georgia in Sanford Stadium ... The Buccaneers will earn a game guarantee of $550,000 against Georgia … ETSU will also play North Carolina in 2022.

In his five years as a defensive coordinator, Pruitt’s defenses averaged 27.8 turnovers gained per season and 2.0 turnovers per game. … Washington led the nation with 136 takeaways since 2013. Pruitt’s defenses totaled 139 in the same time frame.(David Hale, ESPN) … His teams led the SEC in turnover margin three times (2017, 2016, 2014) and his FSU defense finished second in the nation with 35 takeaways (26 INTs)

In Saturday’s game vs. West Virginia, the Vols were outscored 27-7 in the second half, while being out-gained 547 to 301 … Of the 547 yards allowed to West Virginia, 429 came via the passing game

Sophomore Tim Jordan rushed for 118 of Tennessee’s 129 yards and accounted for the Vols’ lone rushing touchdown … Jarrett Guarantano was 19-of-25 for 172 yards and one touchdown (was only sacked once)  … Junior Marquez Callaway led UT with seven receptions for 85 yards … Red-shirt junior linebacker Darrin Kirkland Jr. led the Vols with 10 tackles, while senior defensive lineman Shy Tuttle posted a sack

Neyland Stadium is the fifth largest stadium in college football with its capacity being 102,455 … Tennessee finished the regular season ranked seventh in FBS in average attendance, having drawn 95,779 fans to Neyland Stadium per game in 2017 … The Vols have posted a .775 win percentage at home – going 463-128-17 since 1921

Saturday marks the first-ever meeting between ETSU and Tennessee, which are separated by only 109 miles … In February of 2015, ETSU announced the Buccaneers will play Tennessee … ETSU will earn a game guarantee of $500,000 for playing the Volunteers.

Saturday’s game will be broadcast on SEC Network with the team of Taylor Zarzour (play-by-play), Matt Stinchcomb (color) and Kris Budden (sideline reporter) providing the call. Click here to access the SEC Network channel from your cable provider.

The Bucs open Southern Conference play next weekend as ETSU heads to VMI for a 1:30 p.m. kickoff at Foster Stadium in Lexington, Va.