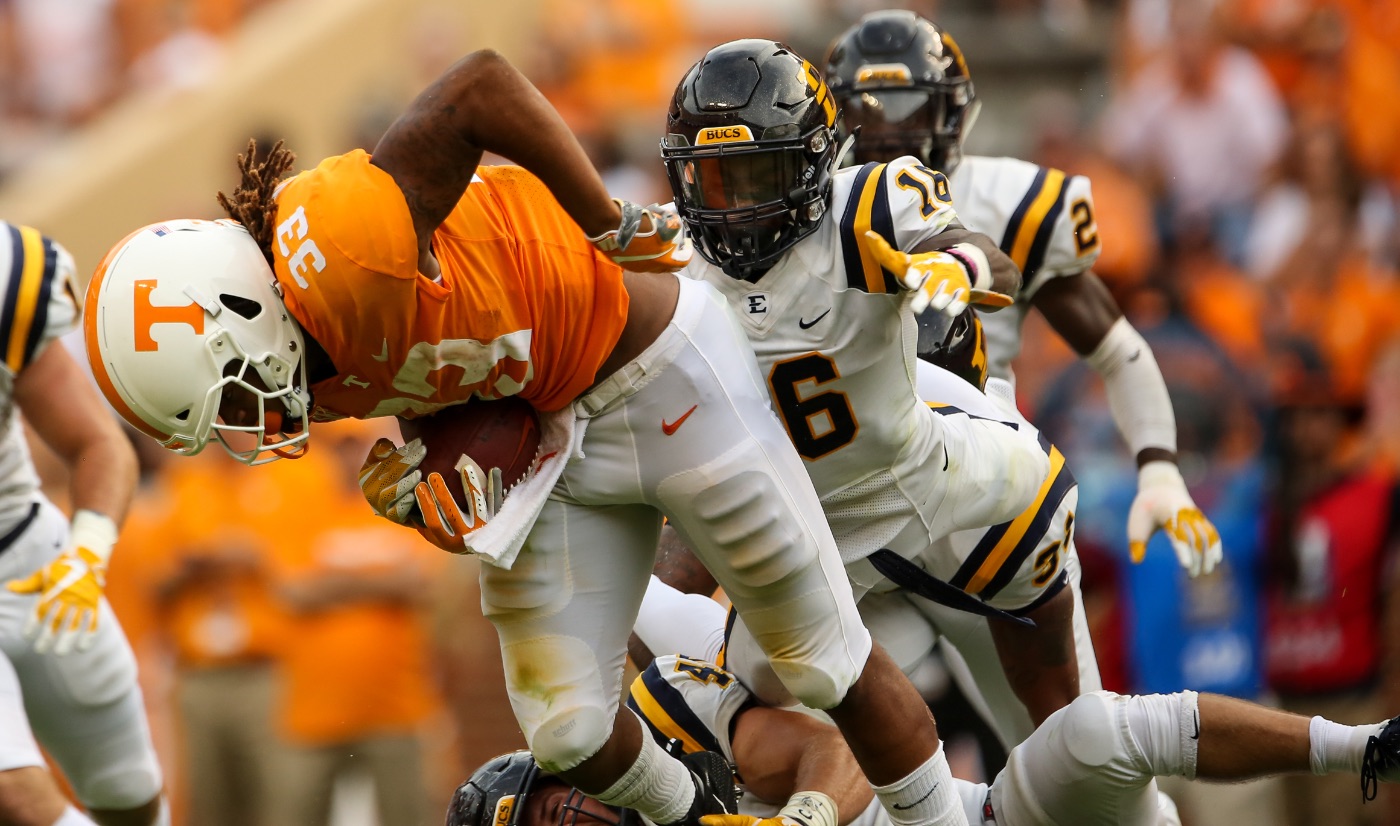 KNOXVILLE, Tenn. (Sept. 8, 2018)– Down by just 10 points with 12 minutes left in the second quarter, the ETSU football team had held its ground against Southeastern Conference foe Tennessee Saturday afternoon inside storied Neyland Stadium. Then the storm clouds came.

Following a 48-minute weather delay for lightning, Tennessee – aided by ETSU turnovers and defensive lapses in the secondary – scored four touchdowns in a span of only nine minutes of game play to build a 38-0 lead by halftime. The Volunteers went on to hand the Buccaneers their first loss of the season, 59-3, before an announced crowd of 96,464 fans.

In a battle of the Football Championship Subdivision Buccaneers and the Football Bowl Subdivision Vols, Tennessee improved to 1-1 on the year. Meanwhile, ETSU dropped to 1-1 as it prepares to open Southern Conference play next weekend at VMI.

While the Bucs had dreams of collecting their first win over a Power 5 Conference opponent since defeating N.C. State, 29-14, back in 1987, it was not meant to be as the Vols capitalized on great field position throughout the night. Tennessee’s average starting field position was their own 38-yard line, compared to the Bucs’ average of their own 24.

ETSU’s defensive effort was a bright spot when not behind the sticks due to turnovers or special team’s breakdowns. In fact, the Bucs made a goal line stand on Tennessee’s first drive and also held the Vols’ offense to a respectable 414 yards in total offense when considering the score of the game. Redshirt senior linebacker Jared Folks (Harrisburg, Penn.) led the Bucs with seven tackles, while fellow redshirt senior linebacker Dylan Weigel(Pickerington, Ohio) added six stops on the night.

The Bucs will hit the road again next weekend, opening their Southern Conference schedule at VMI. Kickoff in Lexington, Va., is set for 1:30 p.m. next Saturday, Sept. 15.