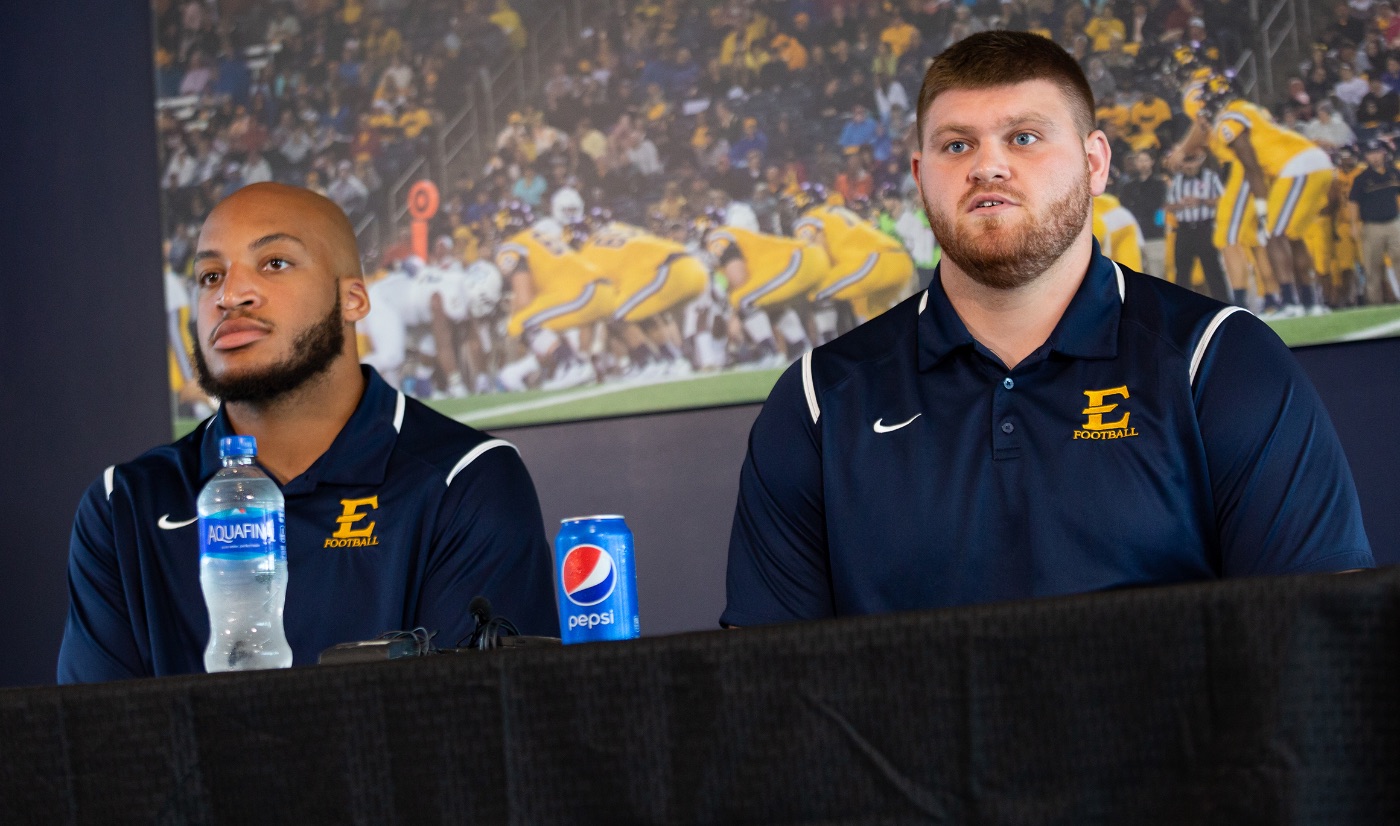 Nasir Player (left) and Matt Pyke (right) met the media on Monday as the Bucs prepare for their SoCon opener at VMI on Saturday.
Football Press Conference -- VMI
Related Links

JOHNSON CITY, Tenn. (Sept. 10, 2018)– The ETSU football team met the media on Monday to recap last week’s game at Tennessee and look forward to its Southern Conference opener at VMI on Saturday afternoon in Lexington, Va.

Below are comments from Coach Sanders, Pyke and Player.

Tennessee is a good football team, there's a reason they're in the Southeastern Conference. They didn't turn the ball over and didn’t have a lot of penalties. Whenever you play a team that is talented like they are, you need some help, they didn't help us much.

I saw a lot of guys with fight and grit. I saw a lot of determination and we protected the quarterback pretty well. It wasn't perfect, but I thought the pass protection was pretty good. There were a number of times we had holes to run in, and times we had opportunities to make plays but they had athletes that covered it up.

I thought defensively we started the game really well. They got seven points on the interception return, got it down three-yard line another time on the interception return. Then we fumbled a punt, and allowed them to score on that play, so there's 21 of the points – I don't want to say came on gifts – but pretty close to gifts. I thought we had guys who played hard and competed.

Looking at VMI, I went back and watched pretty much most all their games from last year, as well as their two games from this season. The Toledo game got out of hand probably about half way through the second quarter and last week kind of got away from them, but when you look at our game here last year, it was 10-6 deep into the game. Then their game with Western Carolina was close into the fourth quarter. They played a lot of games – where even though they didn't come out on top on the scoreboard – they were very competitive, very tough and very challenging. Everybody knows that they haven’t won a game since they beat us in 2016, and looking at the score, they beat us pretty well. I'm sure they're licking their chops for us to come to town. They feel like they have a great chance to get that monkey off their back, and it's going to be a challenge. We're not at a point where we can assume anything or think any game is going to be easy. We better show up and be ready to play every week, and that's our challenge, to show up and play a game this week.

ON GOING FROM PLAYING TENNESSEE LAST WEEK TO VMI THIS WEEK

We'll find out how mentally tough they are this week. I told the team last week, the game was about respect and respect for how you play. It's not necessarily what the final score says, but it's what the guy across from you thinks of you when the game is over. You have to fight for your respect.

We'll find out a lot about how mature we are, how mentally tough we are. I can't imagine us not being excited to play, since you work all year long and you only have 11 guaranteed opportunities… and we've already gone through two of them. For us to go out and play without energy and without passion would be pretty stupid. I really, really hope our guys are smart enough to figure that out. If they're not, then bless our heart, we got a lot of work to do.

We're more confident. In fact, we're embracing being more physical up front. That's been big for us. Going up against our defensive line every day also makes us better, and some of us have been doing that for the last four years. The thing that helps us a lot is competing in practice, how Coach Sanders runs practice and how much we've been able to compete during camp.

ON PROTECTING THE QUARTERBACK

We've struggled with that in the past. We really put a lot of pressure on ourselves this year to come out, protect the quarterback, and really taking pride in protecting the quarterback. We are being more physical up front and I feel like we really showed that this week. Obviously, the score didn't play out to how we wanted it, but I thought we were physical.

ON GAINING CONFIDENCE FROM THE TENNESSEE GAME

I think it will definitely help us as we move on with our season after playing against guys of that size. That’s going to be one of the biggest teams we face this season. I think that's a big thing for us, but we have to keep this rolling as an offensive line and work on getting better each week.

I don't want to say that we overlooked them but we kind of did because they didn’t have a good record at the time, so everyone was just like, "Oh, it's just VMI." We were looking at the next week. So, we know we can't do that this year. We have to approach every game like Coach Sanders says, “the next game is the most important,” so we have to approach this game like it's the most important because it’s the next one on our schedule.

We have a lot of confidence in ourselves. We feel like if we do everything we're supposed to do, then nobody can really mess with us, so we came into the game with that same attitude, and everyone was on top of their game. Everyone was doing what they were supposed to do. We were making plays. We already had a lot of confidence in ourselves, and it didn't change it. It didn't make it any better or worse. We still feel the same way. We feel like we can do whatever we want.

ON QUAY HOLMES AND JACOB SAYLORS

Quay is 6'2", 215 pounds… you can't coach that. He then runs like he's like 5'9,” 180. He's a big body, has good feet and he moves really well to be that size. Jacob's really good too. I remember he came out in the second scrimmage and took off on long runs and caught everybody by surprise. He came into camp playing defensive back and he caught an interception in our first scrimmage. Then he got moved to running back, so he's just an athlete and needs the ball in his hands. Both of them give us good looks in practice, and they're going to be good in the future.